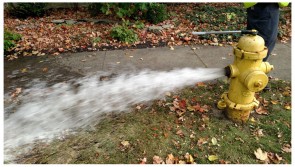 For some reason, the sight of water gushing out of a fire hydrant is mesmerizing. Such a profligate onrush is unusual because the largest flows we normally see come from water faucets or spigots. It seems like something is amiss when a hydrant is open because they are usually such tough characters on the edge of the street, stolid chunks of metal that are part of a city’s impenetrable infrastructure. An open hydrant seems like a dereliction of duty. 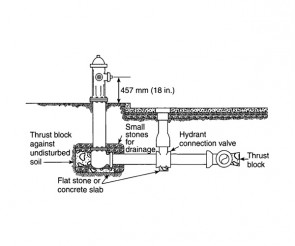 But this isn’t necessarily the case. In fact, opening hydrants is a routine part of city maintenance, which is why Yellow Springs’ hydrants could recently be seen discharging at high volumes last week.

The village’s approximately three hundred hydrants were all opened and flushed over the course of four days. Villagers no doubt experienced low water pressure or brownish water in their own sinks, but these mild inconveniences are all part of the system that makes water on demand possible in the first place.

So, with the mesmerizing flow so visible, I couldn’t help but wonder what was going on. Isn’t flushing three hundred hydrants – sometimes for hours at a time – a tremendous waste? If so, why do it? Everyone is familiar with the appearance of hydrant – is the ability to unleash thousands of gallons of water really as simple as unscrewing a lid? I was personally blown away by the routine procedure, so I looked into what was going on.

Basically, hydrants are flushed for reasons the name implies: to flush out that which can     accumulate in water lines. Rust, debris, stagnant water, animals, and silt are a few of the elements that collect as a matter of course in the complex system that is a city’s water system. Water quality may diminish, become discolored, or start to taste and smell weird if not flushed. One worker said that a family of mice ran out when a cap was opened, but the presence of animals in fire hydrants is a fairly rare occurrence.

The high-velocity of water flowing out of an open hydrant functions as “a scouring action in the pipe and dislodges fine sediment particles.” Flushing also allows workers to check for leaks in lines and hydrants, to make sure hydrants are working (which is especially important in hydrants used specifically for fire-fighting), and helps determine if there are areas where water is flowing inadequately.

Yellow Springs typically flushes its hydrants twice per year, once in the spring and once in the fall. Each hydrant is kept open for anywhere from tens of minutes to a few hours. It all depends on how long it takes to flush out the pipe’s accrued detritus.

WHAT IS A HYDRANT?: 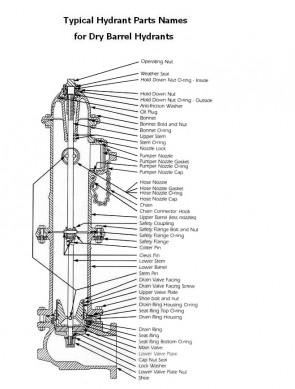 A fire hydrant is essentially a pipe with a valve at the bottom that is connected to a water main. Water is supplied to the hydrant from a pipe by turning a metal stem, which opens the valve. The exposed stem is the little knob that sticks out from a hydrant’s cap. The stem is usually pentagonal and requires a special wrench to open. When the valve is closed, another valve drains water from inside the hydrant. Most hydrants, especially those in areas prone to freezing like Ohio, are kept empty of water to prevent freezing. The valve is typically several feet underground, below the frost line. Most hydrants are constructed to break away easily if hit by a car, as to not damage the underground valve or waterlines. For better or for worse, the dramatic spray seen in movies doesn’t usually happen if a hydrant is knocked over. Hydrants are usually made out of iron, with the valve stems typically made of bronze. Their threads follow standard measurements to insure connection with most fire hoses.

Water is pressurized in pipes or via the downward flow from a water tower. In fact, hydrant caps and bonnets (the rounded part on top) are often color-coded according to their available water pressure: light blue, green, orange, and red, from highest to lowest. (It took all of this author’s self-control not to step in front of one to see how easily a human could be knocked down.) Fire trucks often contain water pumps to make the spray even more powerful – a hose is run from the hydrant to the truck and then through another hose that’s used to fight a fire. Hydrants used for fighting fires typically have a few outlets in order to connect more than one hose, each of which can be operated independently of the other; other hydrants, like those used for water line maintenance, usually have just one outlet. 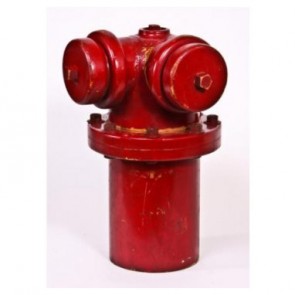 Basic hydrant design has remained unchanged since the late 1800s.

A pressure surge or wave called a “water hammer” can happen when water is stopped or its direction is changed too quickly, which can cause noise and vibrations at best and pipe implosion at worst. Information provided by the city of Sandusky said that “flushing one fire hydrant may cost between $30 – $50, which includes wages, water cost and equipment.” Strathcona County, in Alberta, Canada, said that its semi-annual flushing accounts for about one percent of its annual water use. The county made it sound like this is a small amount of water, but one percent seems pretty high to me.

Firehydrant.org – a really quality and thorough site about all aspects of fire hydrants – had this to say about the cost of a hydrant: “A good quality fire hydrant is less than $1,000. We budget a complete installation (tee, street valve, lateral, bury, extension and hydrant body, properly bedded trench, contractor’s labor) at $3,500 during construction when there is no existing pavement to remove and replace and trenching equipment is already in place, and at $6,500 when streets, sidewalks, etc. have to be opened up and then replaced. Variants also include lateral distance from the main to where the hydrant is actually sited and conflicts with other buried utilities. The most costly component is the feed main.”