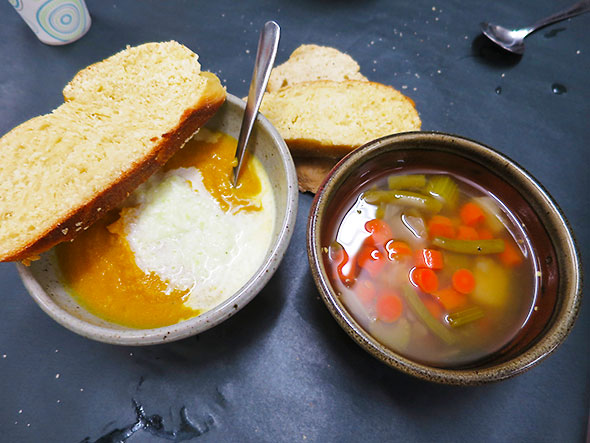 At Thanksgiving we practice hospitality, society’s essential skill. Preparing a meal for family takes thought and practice. Extending our provisions, our home, ourselves to outsiders requires more…heaping helpings of preparation, effort, and grace. Some rise to the holiday’s demands standing nimbly on the shoulders of their forebears. Others prove shy. 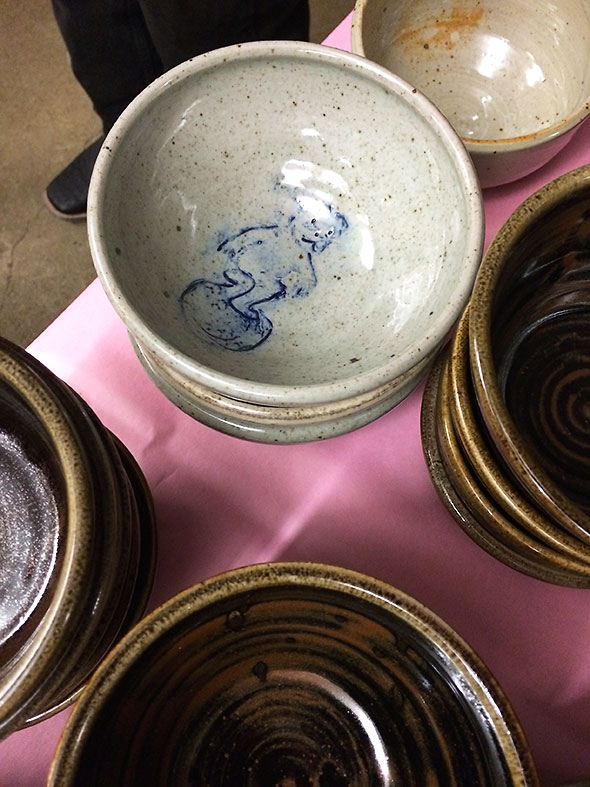 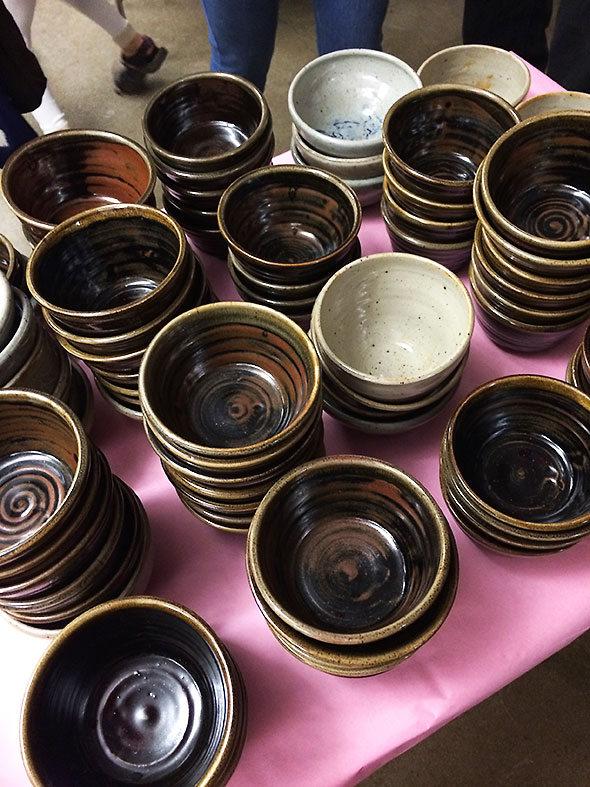 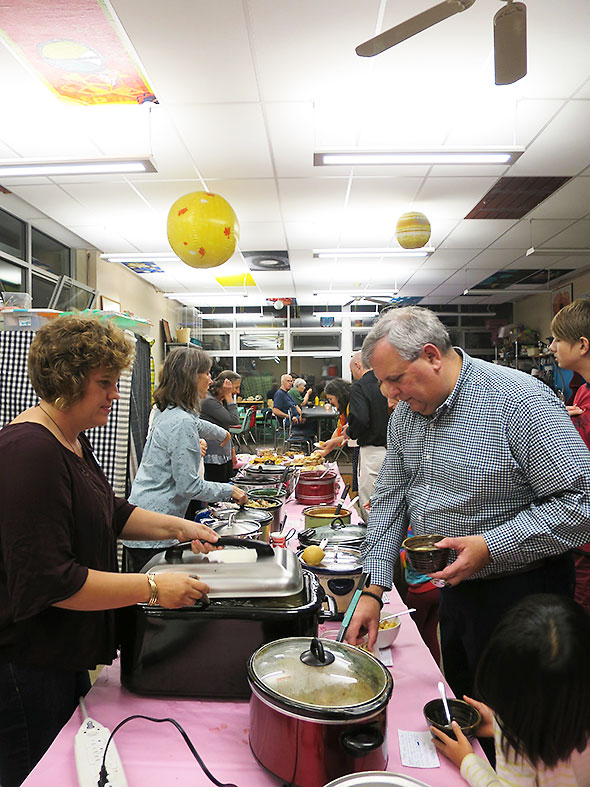 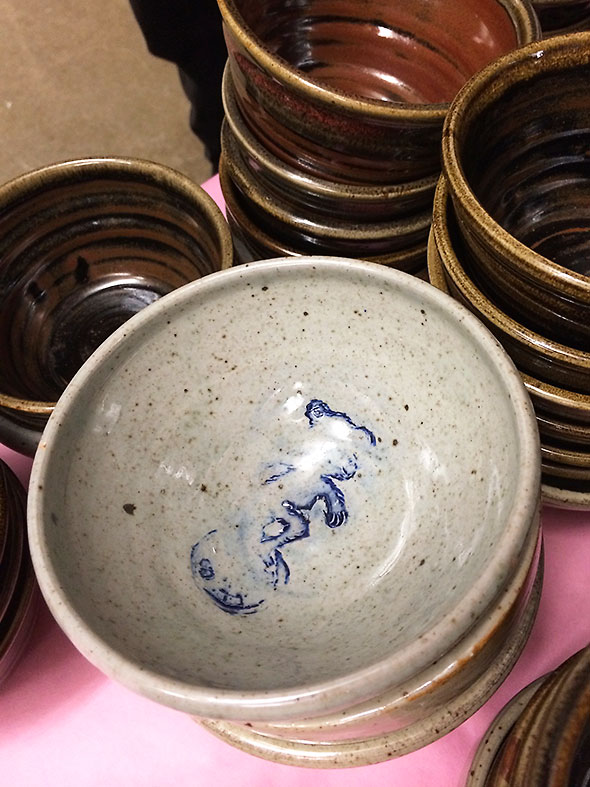 I’m a shy one. There was a time I was sure that I’d never host Thanksgiving. Despite a long history of cooking for myself, friends, and family, I left the intimidating turkey roast to others. I left it alone for a solid four decades. I only put my fears aside one Saturday in November as I watched Dale Filburn pass out fresh turkeys to the village cooks. These cooks were tangibly eager, so exuberant in accepting their bundle that I caught their excitement to my chest and took home a 14 pound half turkey myself. In taking home a half turkey, I realize now that I overcame a significant obstacle: stuffing. I was never a fan. When I was little, I considered any dish embedded with onion as irredeemably ruined. The sploshy texture of uncooked stuffing was also suspect. I would happily sit and watch any cook in my extended family prepping a meal but loading up poultry with that sticky savory-sweet amalgamation would send me reeling from their kitchen in an offended panic. 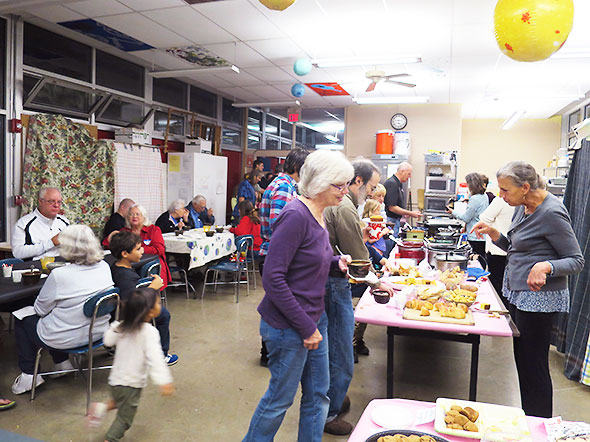 Half turkey has no cavity however. Without cavity, I am free to prepare poultry unmolested by sopped bread. 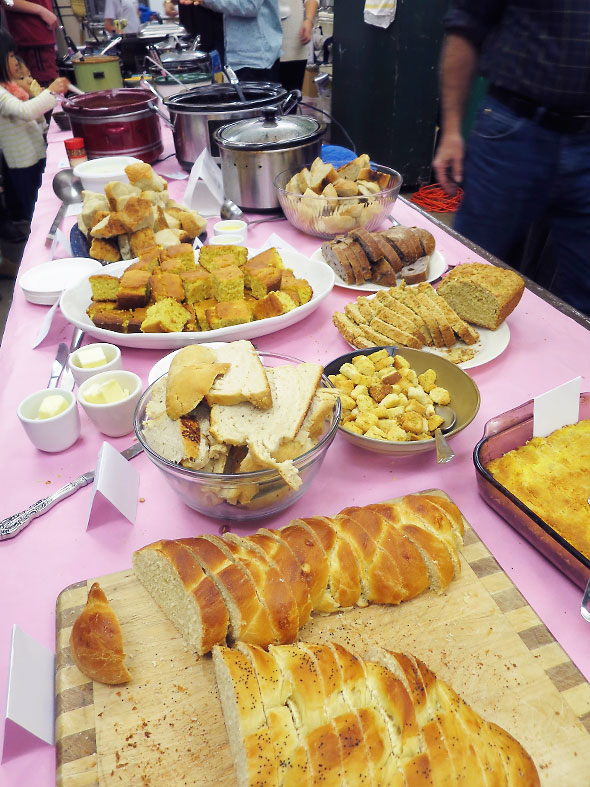 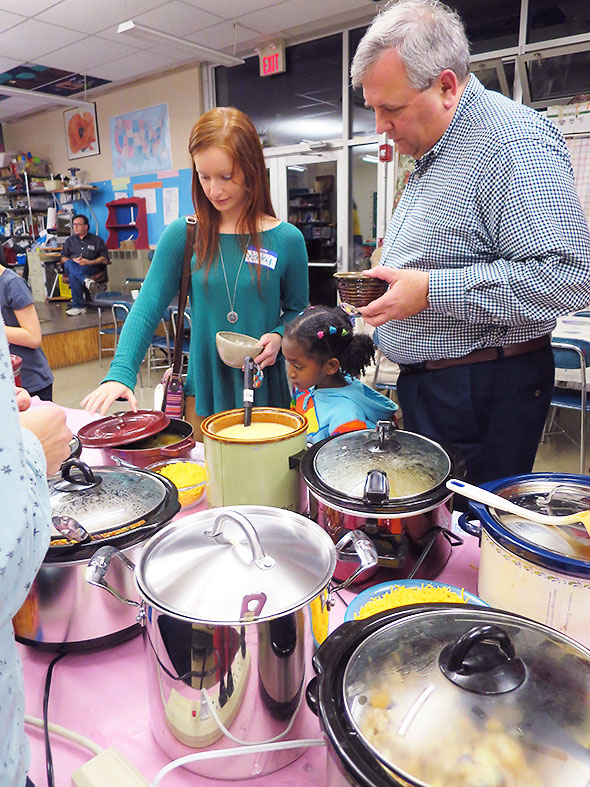 Armed with a temperature gauge, a large roasting pan, and twine, I bundled the bird together and cooked it to tender doneness faster than Jeremy and I thought possible. The meat was superior. Emboldened, we picked up a whole turkey from Dale Filburn the very next Saturday before Thanksgiving and invited our besties over for our first Pre-Thanksgiving Feast. 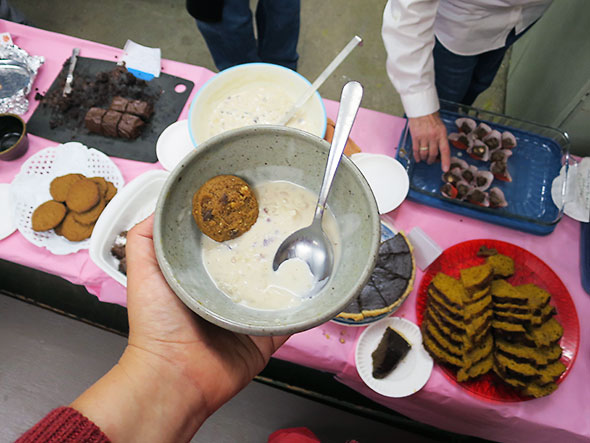 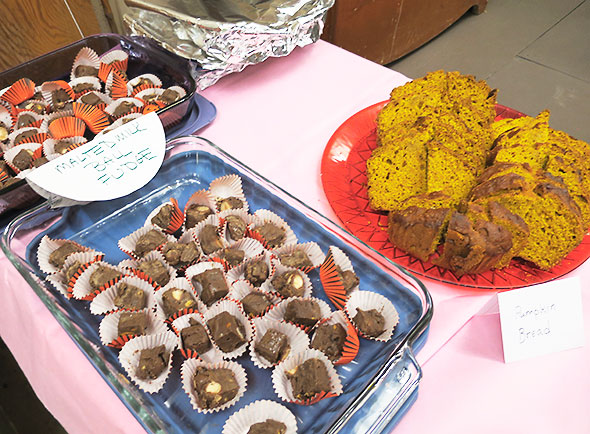 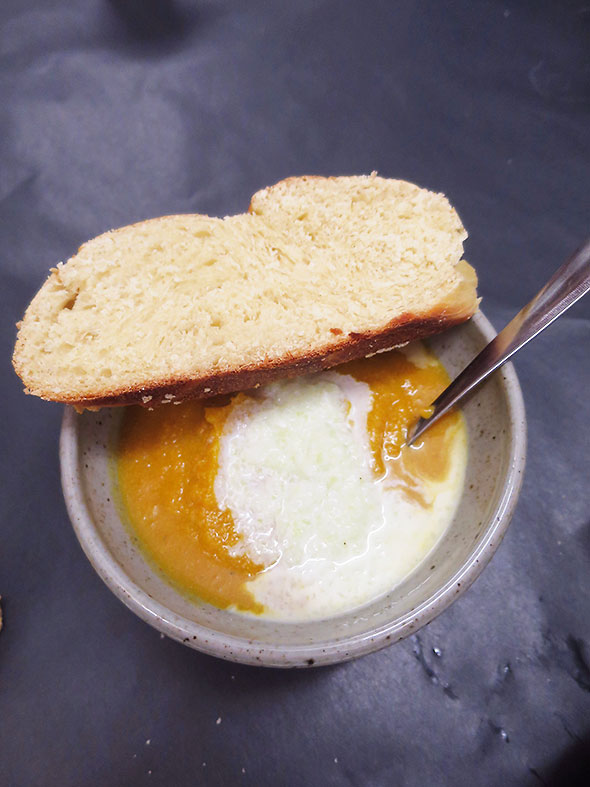 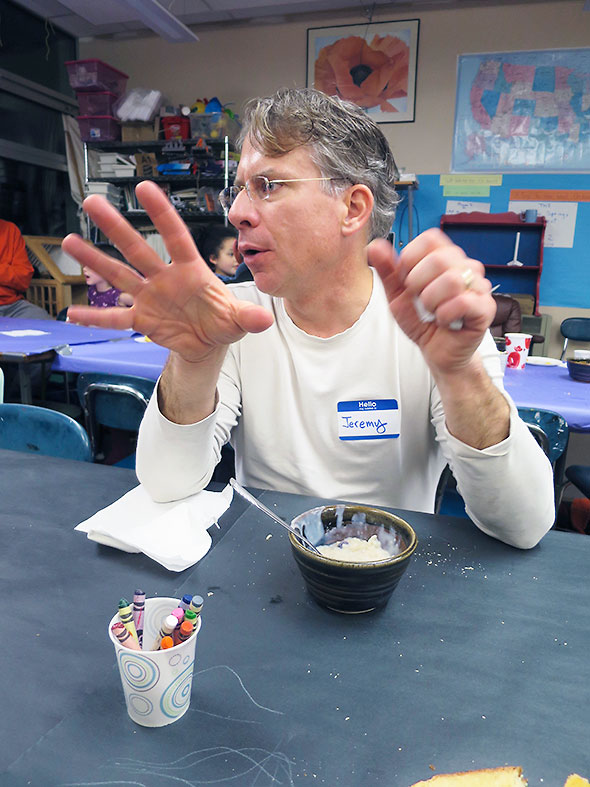 Sometimes it’s not the meal that’s intimidating. Sometimes it’s the guests. As we’ve witnessed with the Syrian refugee crisis, many feel a decided unease at the thought of welcoming strangers into their fold. Here, shyness has curdled to resentment and suspicion…a sad, familiar tale. 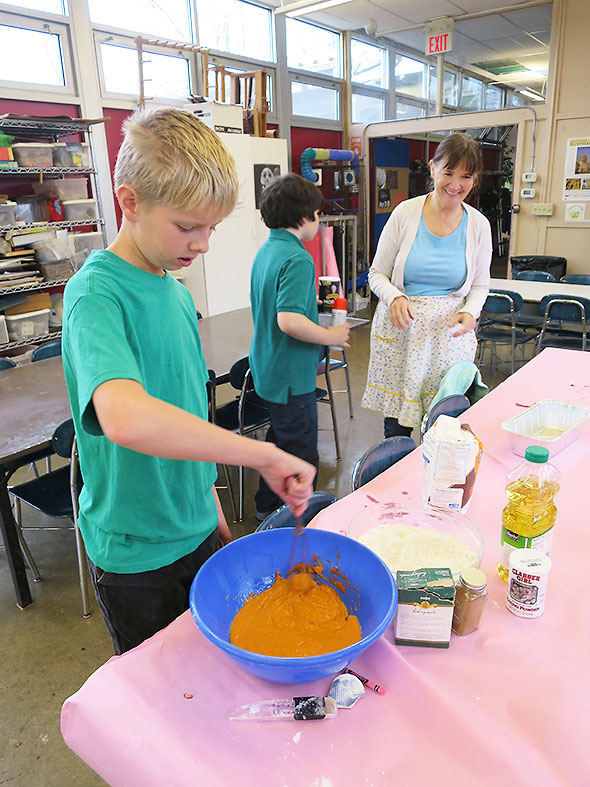 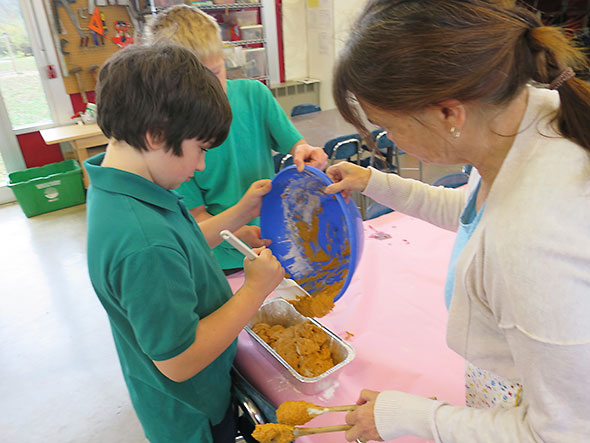 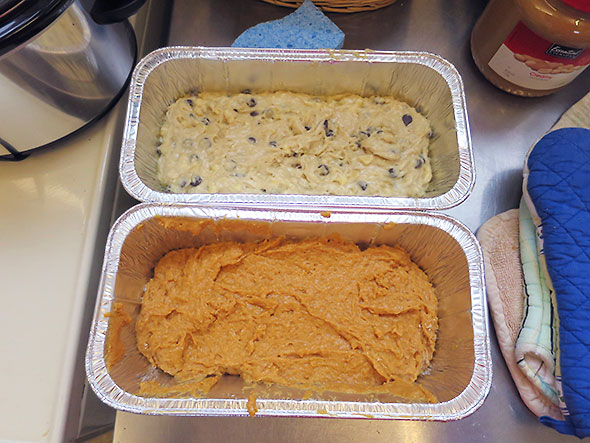 The sad villagers in the classic story Stone Soup are intimidated by both food prep and foreigners. Foreign travelers ask after food and shelter but the townspeople—embittered by scarcity and fear—close their doors and their cupboards. The villagers make such a show of distress that the travelers offer to prepare a meal for the villagers…a batch of stone soup just to get them back on their feet. Together, the soldiers and townspeople build a fire in the center of town. The villagers set a great pot set over the flames and fill the pot with water. The soldiers then carefully plop three round stones in the pot and begin stirring the “broth”. As the water heats up, the soldiers make passing suggestions on what might make the soup that much richer. They sigh afterwards, “No use wishing for what we don’t have.” The villagers take hint and one by one, interest overcoming fear, pour in contributions of carrot, cabbage, potato, meat, barley, and cream. Soon, the soup is rich enough for royalty. The community rises to its splendidness and sets up a great table with bowls, bread, and cider. There is music and dancing into the night as all come to partake of the marvelous stone soup. 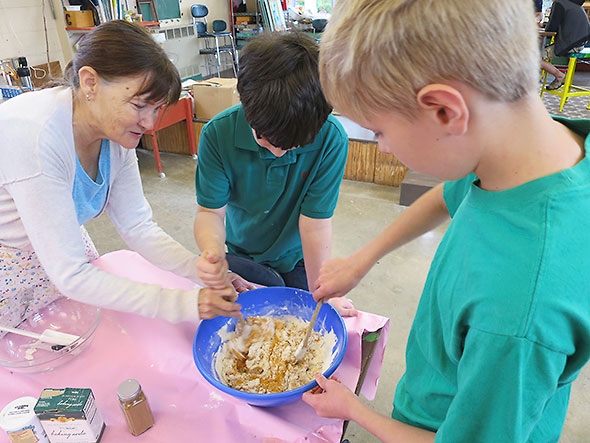 In the lead up to the Antioch School’s annual Soup Supper, my daughter’s class revisited this classic tale of three foreign soldiers passing through a strange village on their way home. When the younger group made their own version of Stone Soup for the evening supper, my daughter was keen for a cup. She made sure to bring carrots…the first ingredient to hit the water after stone and salt. She made her parents promise to share a bowl. We gladly agreed. 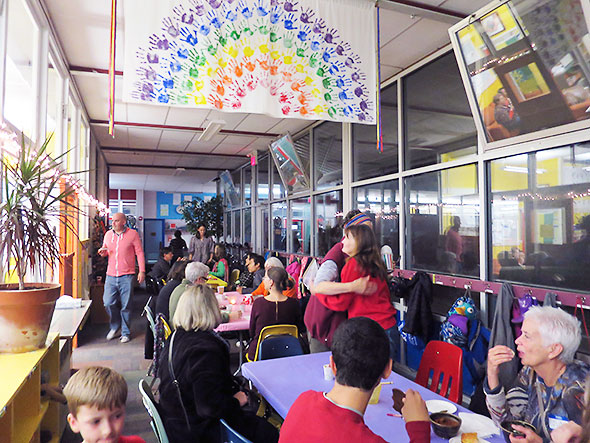 I’d been looking forward to the supper for some time. The older group’s teacher Chris Powell told me of her students’ plans to make breads…pumpkin, slow-rise white, corn bread, and challah. Still I was surprised at how much the children had accomplished by week’s end. The supper boasted several bread loaves and many crockpots of fine aromatic soups. I filled a bowl of stone soup proud and pleased as my daughter touting the goodness of her vegetable consommé. I also grabbed a wedge of white bread—such an excellent crumb that I was envious—and bowl of hot pumpkin soup garnished with a slip of cold cucumber soup. 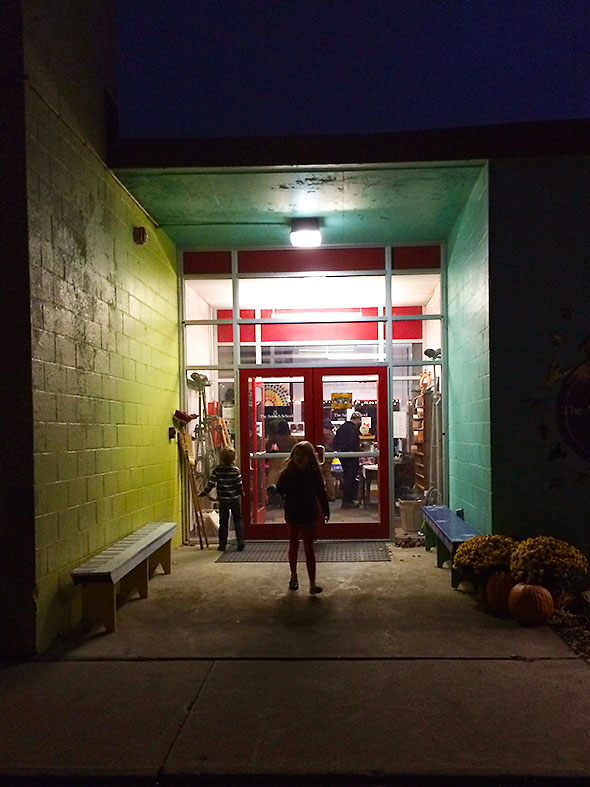 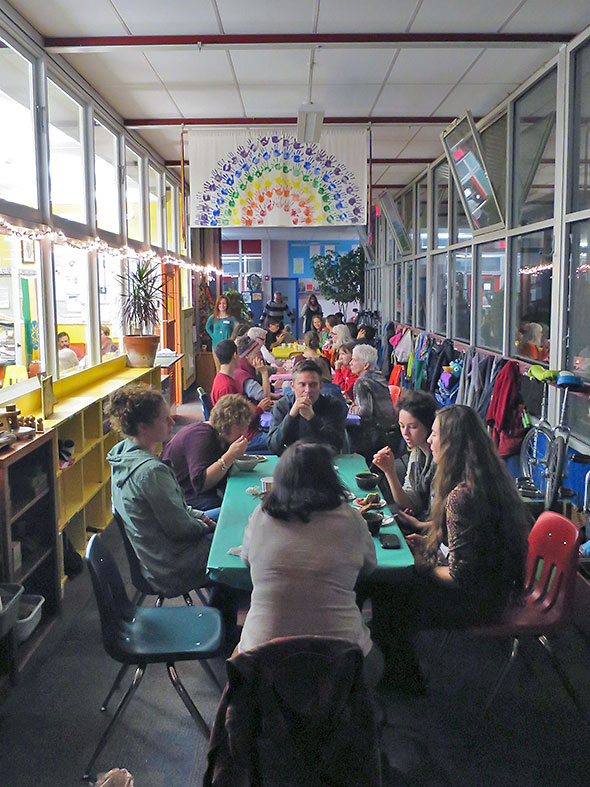 The variety of soups was impressive. I heard one father note how much had transpired over the years. The annual soup supper had started modestly with just a couple of soups and crackers. Now it was an expansive feast for the senses and a lively, well attended community event. 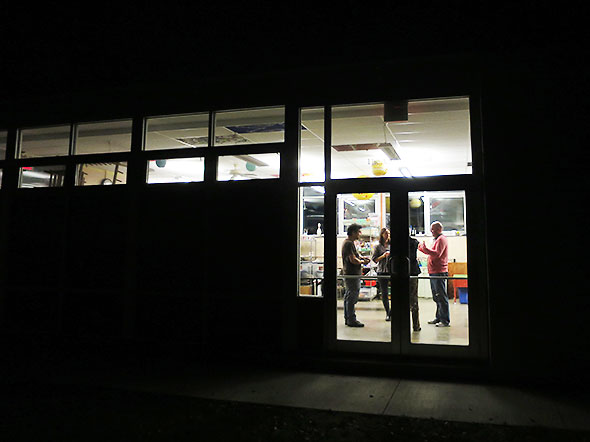 The students had worked on the supper all throughout the week—planning, prepping, cooking, decorating—and their preparations had paid off. Some errors were made—a over-salted pan of cornbread had to be set aside—but practice makes confident. Two weeks later they began the cycle again preparing an afternoon dinner to kick off the Thanksgiving break. The younger group made mashed potatoes, the Kindergarden roasted a turkey. The older group made several scratch pies including a great many pumpkin pies that put my previous efforts to shame. To our joy and contentment, my husband and I have sampled not one but two ambitious meals in month of November with our eight year old child serving among the hosts. What could be better than watching your child embrace life-giving, hope-filled skills…learning to create a welcoming environment where quests feel valued? We lingered in that environment this month…feeling all the potential of a space well made and of young people well met.