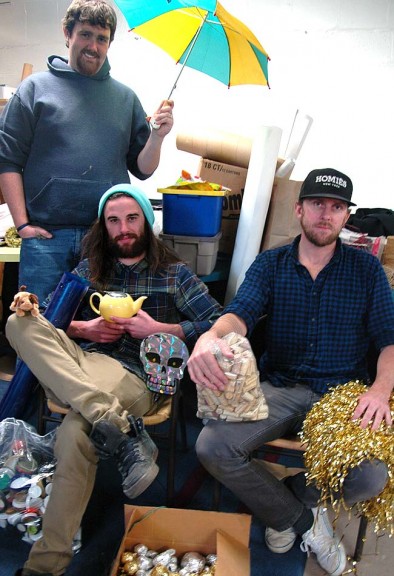 Nathan Foley, top with umbrella, Brandon Lowery, holding teapot, and Jesse Thayer, with pompom, are the artists who were locked up in the Arts Council Gallery for three days this week during Locked In: A Creative Collaboration. A reception for the project takes place Friday, Nov. 13, from 6–9 p.m. at the gallery, where the artists will speak about their experience at 7 that night. (photo by Diane Chiddister)

Unlocking the muse at ‘Locked In’

A package of flexible straws.

A plastic bag of jar lids.

These were some of the many items that artists Nathan Foley, Brandon Lowery and Jesse Thayer had to work with on Monday morning, when they began “Locked In: A Creative Collaboration” at the Yellow Springs Arts Council Gallery. The artists were charged with creating art from the items, which had been donated by community members, while locked in the gallery for three days. Before Monday, the artists had no idea what their materials would be, but they appeared undaunted by their eclectic nature.

“I pretty much expected something as chaotic as this,” Thayer said on Monday morning.
And Lowery added, “The fun is beginning.”

Their first task, according to Foley, was to transform the gallery entrance way for the guests who will attend the “Locked In” reception this Friday, Nov. 13, from 6 to 9 p.m. The three men will talk about their experience at 7.

“Locked In” is in its second year as a YSAC event. The premiere event, a year ago, proved wildly popular, according to YSAC gallery director Nancy Mellon.

“It was wonderful. The excitement and curiosity, cheerful goodwill and energy that came off of everyone was stunning,” Mellon wrote in an email.

Foley, Lowery and Thayer actually applied to be locked in a year ago for the premier event, according to Mellon, presenting themselves as a team. While organizers chose three separate artists to participate last year, they also wanted the team, so they asked the men to take part this year instead.

The artists applied as a team because they had enjoyed working together once before, when they were both graduate and undergraduate students in Miami University’s art department. However, that collaborative project was commissioned, so that the outcome was already determined. In contrast, nothing is determined about “Locked In,” except that in three days they would create somthing artistic from materials that on Sunday were hidden under a tarp.
The spontaneous nature of “Locked In” appealed to Thayer, a sculptor who describes his style as loose and free wheeling.

“Not knowing what’s under the tarp is exciting, finding out how the materials will talk to each other, where they will go,” he said in an interview on Sunday. “It didn’t take much to talk me into this.”

In contrast, Foley, who creates abstract sculptures inspired by flight, sees his artistic process as tightly controlled and meticulous, so he looks to “Locked In” as a chance to break free.

“I want to become looser,” he said.

“The blending of our styles will be interesting,” he said.

A fourth artist involved in the collaboration is professional photographer Rod Hatfield of Springfield, who will both be taking photographs and videotaping the three-day process. While the video won’t be available by Friday night’s reception, photos will be on display.
Hatfield, who lives part of the year in Seattle, became interested in the project through meeting Mellon in recent months.

“She said the Arts Council was doing this crazy project, and would I be interested in documenting it,” he said.

While Hatfield admits to initial skepticism, he’s now impressed with the artists, he said on Monday morning.

“I think these guys will create something really novel,” he said. “And they have an impressive arsenal of resources.”

While after three days of nonstop creating the artists will be allowed to go home on Thursday morning, the “Locked In” creation will remain on exhibit until November 30.