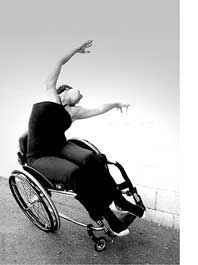 A screening of the documentary film “Invitation to Dance” will kick off the local Valuing Diversity: Reframing Disability conference next week at Antioch University Midwest. The film will be shown at 6:30 p.m. Wednesday, Dec. 9, and a panel discussion will follow, both in AUM’s Media Room. The day-long conference will open the next day, Dec. 10, at 8 a.m. with a keynote talk by Julie Williams, of Wright State University’s School of Psychology. (Submitted Photo)

“Diversity is being invited to the party; inclusion is being asked to dance,” writes attorney and diversity consultant Vera Myers.

The concept serves to reframe our thinking about others — whom do we welcome; whom do we exclude, how do we define our expectations, and how to we limit our community experiences?

Those are some of the questions at the heart of the second annual local conference on disability organized next week by Yellow Springs residents Debra Williamson and Adriane Miller and sponsored by the Yellow Springs Human Relations Commission, Antioch University Midwest and the National Conference for Community and Justice (NCCJ) of Greater Dayton.

“Valuing Diversity: Reframing Disability” is scheduled Wednesday and Thursday, Dec. 9–10, at Antioch University Midwest. Aimed at social workers, educators, parents, caregivers and others, conference organizers seek to raise awareness about all types of disability, including developmental and cognitive issues, mental illness, and the range of physical and invisible disabilities.

The goal is “to help people see the fullness, the wholeness of an individual, rather than the disability,” said Williamson, whose 17-year-old son, Alex, lives with “pretty severe needs.”

The conference opens Wednesday evening with a free screening of “Invitation to Dance,” a documentary by Christian von Tippelskirch and Simi Linton about Linton’s personal journey after the student dancer was struck by a car at the age of 23 and learned to reframe her life in a wheelchair.

Williamson, who organized a film showing and discussion two years ago that was a precursor to the now annual conference, said that “Invitation to Dance” was chosen to kick off this year’s event because it not only focuses on inclusion, but also “the whole individual.” A panel discussion on disability, identity and advocacy will follow the 6:30 p.m. showing in AUM’s media room, and conference registration will precede it at 6 p.m.

Registration continues from 7–8 a.m. Thursday for a day-long slate of talks and workshops, beginning with an 8 a.m. keynote address by Julie Williams, of Wright State University School of Professional Psychology. Williams, who was born with dwarfism, plans to share her views on “crip” cultural history. Topics for the conference sessions that follow include parenting strategies, “making the invisible visible,” educational support and sexuality.

Dara Crosby, a licensed counselor who was born with cerebral palsy and took part in last year’s conference, will speak about the “adventures” of dating in a wheelchair. Diana Holderman, with the Greene County Board of Developmental Disabilities, will lead a discussion about the rights of people with intellectual developmental disabilities. Williamson will talk about self-care and compassion for care-givers. Other speakers will address multiculturalism, inclusion policies and community barriers.
“We have some phenomenal speakers,” said co-organizer Adriane Miller, who works for the National Conference for Community and Justice. Miller has been involved in the effort since the original film screening two years ago, and notes that she has a son the same age as Alex. She said part of the reason she is involved is because she feels that it’s important “to speak up for those who can’t.”

Williamson noted that barriers for people with disabilities are often invisible to those who don’t face them. The absence of sidewalk ramps outside a store, limited space for wheelchairs inside a theater and other situations that affect a person’s access to community life aren’t obvious without awareness-raising.
And yet, according to the 2010 U.S. Census, nearly one in five Americans — more than 56 million people — live with a disability. That’s not obvious looking around our village and the wider community, Williamson said. She noted that the Americans with Disabilities Act is 25 years old, but our infrastructure still often appears as though “our society doesn’t consider” the needs of people with disabilities, which “imperils their ability to participate.”

The annual Valuing Diversity conferences and the film screening and discussion that preceded them have been scheduled to align with the UN’s International Day of Persons with Disabilities, which is observed each year on Dec. 3.

Williamson said that she is passionate about making the invisible visible in multiple ways. She said she lived for a long time in New York, where she worked in the corporate world. Her son was born there, and once he started school, she would go to his IEP (Individual Educational Plan) meetings.

“The room was full of people with all different specializations,” she said. Some were medical, some focused on issues of accessibility, some were educational. “I felt really privileged that I was able to understand, and that I could research and communicate.” She said she realized that many parents didn’t have those privileges, and so becoming an advocate for her child also meant becoming an advocate for other families.

A business instructor at Edison State Community College, Williamson approaches her advocacy much like a teacher.

“Where do we get these notions about how we treat people with disabilities? That’s the stuff I’m interested in,” she said. “I like to think about that, and to help get [others] to think about, to see the whole being, as opposed to seeing people from a sense of lack. That’s a pretty myopic view of an individual.”

To see the whole Valuing Diversity conference schedule or to register, go online to http://www.nccjgreaterdayton.org.