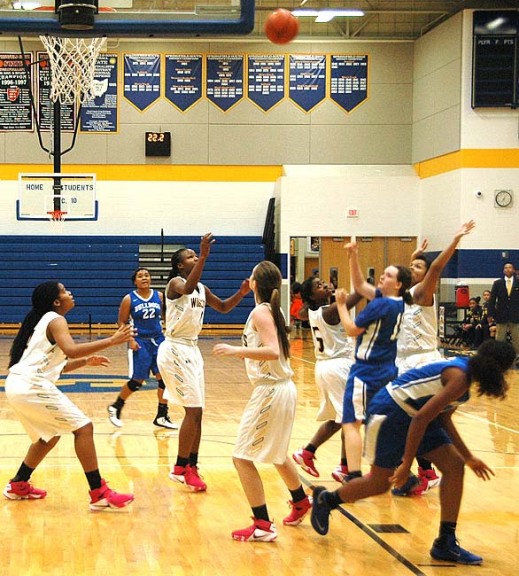 YSHS Lady Bulldogs #15 Gracie Price shoots the ball around Springfield Wildcat’s defense on Dec. 14. The Bulldogs were up most of the game but ultimately fell in the fourth quarter, 54–48. Price scored 13 of the team’s points. (Photo by Dylan Taylor-Lehman)

“Swimming is hard,” said Yellow Springs Swimming Assistant Coach Jody Chick. Swimmers swim 2,700 yards — 1.5 miles — at least four times per week. Swimmers are known to get up at 4:30 in the morning for pool time beyond that of practices. It is both an individual sport and a team sport, and something that not everyone can do.

The combined experience of Chick, Head Coach David Hardwick and Assistant Coach Franklin Halley is primed to sluice the YSHS swim team to victory. Chick’s three daughters have all competed on the state levels, and Hardwick and Halley are both Master-certified swimmers and have swum together for at least 13 years.

Something in the pool water has evidently fostered an enthusiasm for swimming. Chick said that interest in high school swimming has grown every year. Only a few years ago there were six people on the team; now the team boasts 25 members. Last year, YS swimmers Aman Ngqakayi and Olivia Chick competed on the state level, with Chick placing top eight in all of her events and Ngqakayi shaving seconds off his personal bests.

“You never know how far the kids are going to go,” said Hardwick.

But while a championship is of course a laudable achievement, inculcating a habit of “fitness for life” is just as important. Hardwick said he likes relating to the team on an individual level. Some of the YS swimmers are experienced competitors in club swimming and some are on a swim team for the first time. His instruction is tailored to the individual and how each swimmer can improve his or her own abilities. He said he loves being creative and coming up with new workouts for the swimmers.

“I give the grueling workouts and they turn around and say they love it,” Hardwick said.

This year is Hardwick’s first year as head swim coach. His grandparents, parents, and siblings are all teachers, he said, and he thought he evaded being a teacher by joining the Air Force. But he found himself working as an instructor there and coaching a number of sports. Teaching is in his blood, he said, which must be why he has taken to coaching.

“What we do is really important,” he said. “We can share knowledge with the kids, build character, build future citizens.”

“I like being a part of that,” he added.

The YSHS Bulldogs swim team will compete in its first meet on Sunday, Dec. 20, at the Bethel Invitational, hosted by the New Carlisle Sports Club.

The Bulldog’s unapologetic winning streak continued on Dec. 11, when YSHS beat Miami Valley by 35 points, ending the game with a score of 72–37. Isaiah Taylor again racked up the most points of the evening with 17; Tony Marinelli was close behind with 14 and Devon Perry scored 9.

The Yellow Springs Lady Bulldogs unfortunately didn’t fare as well last week, suffering a 60–9 loss on Dec. 10 at the hands of the Miami Valley Rams. Julian Roberts, Ayanna Madison, Sydney Trimbach and Molly Hendrickson were responsible for the team’s points. The team’s league record is 0–3.

But the team fared a little better in the Dec. 14 non-league game against the Springfield High School Wildcats. YSHS was ahead for most of the game, and ended up losing by only six points, 54–48. Gracie Price racked up 13 points, Julian Roberts scored 11. Elizabeth Smith sunk 10 points, with Molly Hendrickson contributing seven, including the first three-pointer of her career.

Head coach Vance Venesky said the young team is “a work in progress.” The Lady Bulldogs have 14 more games in the season, ample time to work towards pushing the ball more and overall playing a faster-paced game, he said.