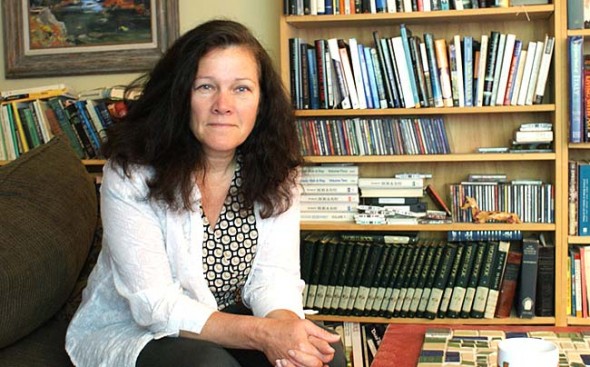 “Azimuths,” the third novel by local author Rebecca Morean, was published earlier this month. Morean has written screenplays, short stories and six other novels, and teaches composition at Sinclair Community College. She maintains that writing is empowerment. “If you’re empowered, you know where to get answers to your questions, and how to ask them.” (YS News archive photo by Megan Bachman)

Writer wields power of her pen

According to Rebecca Morean, a writer and Yellow Springs resident, knowing how to write can inspire confidence in any situation. Writing helps hone critical thinking skills, and helps organize and articulate thoughts. A well-practiced writer can navigate anything with aplomb, from arguments to marriage proposals to asking for a raise.

“Writing is all about empowerment,” she said. “If you’re empowered, you know where to get answers to your questions, and how to ask them.”

Writing is a skill that has served Morean well indeed. In empowering herself to find the right answers, Morean has been able to embark on the career of a professional writer. She has published three novels and numerous short stories, worked as a grant writer, and is now a tenured writing professor at Sinclair Community College in Dayton.

Morean’s newest novel “Azimuths” was published this month by Avignon Press. The novel chronicles the life of five women and their husbands who live in a trailer park on the Mojave Desert. The story is one of “physical and emotional paralysis,” an exploration of each woman’s life trajectory and how their lives are related, she said.

Morean began writing “Azimuths” over 20 years ago. She was working diligently on the book for a few years but eventually shelved it for various life reasons. But she dusted off the manuscript off about three years ago and found herself reinvested in the novel. The more she read, the more she liked it, she said. After some minor editing and tweaking, she finished the book and fairly quickly found a publisher.

“Azimuths” is one of seven novels Morean has written. Her approach to writing each book was determined by the story she wanted to tell. Some of her novels were built around characters she imagined and really wanted to write about. As the characters took on lives of their own, the story developed with them.

But her upcoming novel “Being God (and Other Unfortunate Avocations)” began with a theme — a satire on the concept of faith — which helped her understand what the book was about before she even knew what characters would populate it. Her books are like her kids, she said, each one is different.

“Azimuths” was published under the name RA Morean, one of a few pseudonyms she has employed as a writer. The names hint at the timbre of the respective work.

“RA Morean” is the slightly more serious-sounding appellation that she attaches to her novels and short stories. It was chosen in part to disguise the gender of the author, she said, as publishing houses still operate under antiquated ideas of who make the best writers. Her first published novel, “In the Dead of Winter,” was published pseudonymously as Abby Pen Baker; the nom de plume is actually that of a character in the story. “We’ve Got This,” a romantic comedy published in September, bears her full name because she is very proud of the results, especially considering it is a work in a genre she hadn’t tried before.

Like working under the auspices of different names, Morean has also been able to explore a number of takes on the world by working in a variety of different genres, including adapting extant stories to new formats. “We’ve Got This” exists as both a screenplay and a novel, and she has turned “In the Dead of Winter” from a novel to a screenplay.

Morean described the process of adapting “We’ve Got This” as “exhilarating.” Telling the same story in these different mediums is a good exercise for a writer, she said. An audience is drawn to the physical presence of actors in movie, and so in going from a prose-heavy novel to a screenplay she realized she had to create scenes for the characters that include more movement. Otherwise it would end up looking like an episode of Masterpiece Theater, where characters are just sitting around drinking tea, she said.

Morean used to write only in the morning, partly out of necessity (as she was raising four kids) and partly because no other time of the day felt conducive to creativity. But she found that a limited schedule can pose a problem for the modern author. The steady hustle that is trying to get work published requires a real time commitment to the craft, to say nothing of the time needed for writing itself. But a few choice words from Pulitzer Prize-winning author Elizabeth Strout encouraged Morean to adopt a more productive routine. Strout told her flat-out that claims about only being able to write at certain times of the day were nothing but excuses. If she wanted to be serious, Strout said, pick what you want to work on and work on it whenever you feel like it. Morean took the directive to heart and began writing whenever she could, when her kids were occupied or even when cooking dinner. (She also noted that Strout taped the word “ruthless” to her computer, a practice that reminds her to be relentless in her own auctorial pursuits.)

While Morean has a number of books and publications under her belt, she said she felt like she’d “come home” once she started teaching. She taught a few writing seminars when she lived in Vermont and did the “adjunct shuffle” for a number of years at other universities, but has found a home as a professor of English composition and creative writing at Sinclair Community College.

One of Morean’s favorite classes to teach is an introduction to composition course. She said that students often come into the class dreading writing thanks in part to the way writing is taught in schools. Fledgling writers are taught all kinds of hard and fast grammar, she said, rules that only limit the possibilities of expression. She said she “throws a hissy fit” in the beginning of class, throwing pens around the room in a reflection of the anxiety so many students have about writing. A lot of teachers don’t like to teach introductory classes, but Morean said she loves the chance to show students that stress about writing doesn’t have to be an impediment to their expression.

It goes back to the idea of writing as empowerment. Whether helping a first-time writer tell the story she is dying to get out, helping a writer polish a manuscript (she also wears the hat of content editor) or simply developing writing skills as a way to better communicate in general, all of these processes are in service of living and telling one’s story in the world. Part of writing is learning how to trust the creative process, she said, sage advice from someone whose own process has allowed her to pen her own story.

Morean’s next event will be a book signing and discussion at 7 p.m. on Dec. 10, at Books and Co. in Beavercreek. “Azimuths” can be purchased at Amazon and in area bookstores.