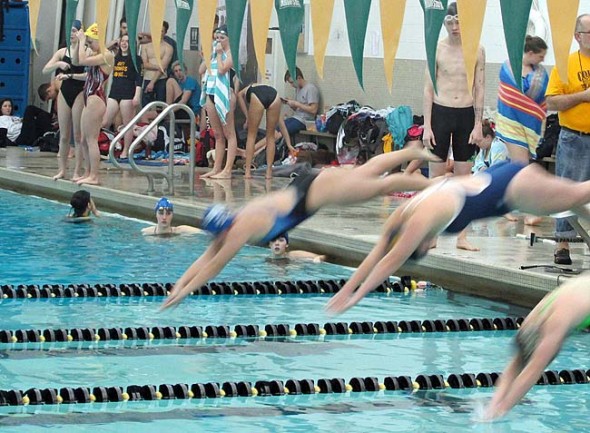 YSHS swimmer Madison Kellar dives into the frigid waters of competition on Jan. 23 at the Kenton Ridge Invitational in Dayton. The team’s performance was laden with ranking finishes and no less than 27 personal bests. Kellar had a personal best in the 500 freestyle, swimming almost a third of a mile in 7:39.38. (Submitted Photo)

SWIMMING
Eighteen swimmers recently represented Yellow Springs High School at the Kenton Ridge Invitational, held Jan. 23 in the cutthroat waters of Wright State Natatorium’s 25-yard pool. This year 17 total schools vied for top honors in 22 swimming events. YSHS swimmers not only did tremendous justice to the Bulldog banner, but left with feelings of personal glory as well, as the swimmers set no less than 27 personal records.

Thirty of the team’s 56 points came from five relay finishes. Ty Arnold, Trystan Burch, William Gregor and Aman Ngqakayi finished fourth in the boys 200 freestyle relay with a time of 1:49.06, which was also their best time of the season. Assistant Coach Brad Martin noted that the race was the “first time this year each of the boys broke 30 seconds.” In the boys 200 medley relay, Burch, Ngqakayi, Gregor and David Walker garnered a fifth place in 2:01.97, which was also their best time of season.

Individual efforts resulted in an additional 16 meet points. Leading the charge and setting a meet record was Team Captain Ngqakayi, who scored nine points with his first-place finish in the 200 freestyle (FS) in a blazing 1:50.87. He also scored second place and set a personal record with a time of 1:02:93 in the 100 breaststroke. Walker finished 4th in the 100 butterfly, in 1:17.54 and had a personal record in the 50 freestyle.

Basketball
The Yellow Springs boys basketball team walked away from Xenia Christian’s court with a certain amount of panache and confidence. They won their Jan. 22 game with a cool nine-point margin, 71–62, despite a rocky third quarter in which Xenia scored almost three times as many points.

On Jan. 23, perhaps tired from the game the night before, the Bulldogs were not quite as successful in their game against the Triad High School Cardinals, though they lost by only the third-closest margin possible in basketball. The final score was 57-54. The boys have an overall record of 12–5, with a conference record of 8–0.

The Lady Bulldogs have only played one game in the interim, playing the Xenia Christian Ambassadors on Jan. 21 on their opponent’s turf. Junior Elizabeth Smith scored 22 points and Amani Wagner netted eight, but the combined Bulldog effort was not enough to depose the Ambassadors. The final score was a close 46–39.