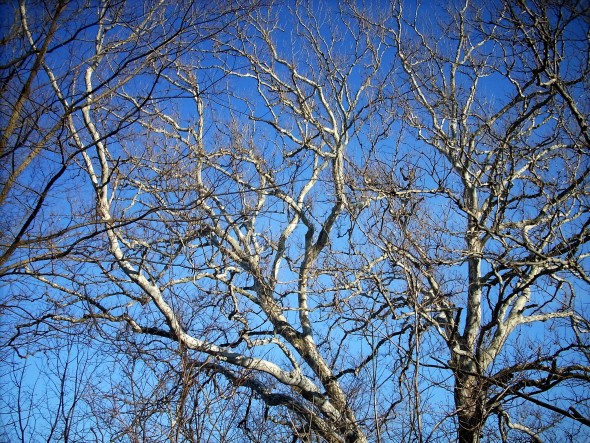 Sycamores along the bike path (Photo by Audrey Hackett)

I walk to work at the News, and opted to take the long route home one day this week. The very long route: I took the bike path north to the Ellis Spur, then looped back along Polecat to the north end of town where I live. It’s a beautiful route, easily my favorite walk in the village. I allowed myself to walk fast —  the least of my three walking speeds, faster and fastest being the other two — rather than struggling against my natural briskness in the name of “slowing down.” Last fall, I spoke to a wise woman in the village about my desire for more meditative walks. I believe I wailed, “Why can’t I slow down!” Being a wise woman, she intuited at once the deeper meaning of my complaint.

So this week, as I was “walking right” and feeling the freedom of that, I was also thinking about freedom — inner freedom, I mean. Matching my gait to my thoughts (or was it the other way around?), I realized that one part of freedom was what I was experiencing right then: the removal of arbitrary constraints. Believing that a person could “walk wrong,” and believing, moreover, that I was that person, misstepping with every step — well, it’s not hard to see how arbitrary, and how constraining, that is.

Walking fast, I wasn’t less in contact with the world around me, as I’d often feared. In certain ways, I was more in contact: witness the thud of boot on paved path. I could sense that I’d been a little afraid to strike the world in this way, but the solidity of the contact felt good, and the path did nothing to signal that the feeling wasn’t mutual. (I tripped over no sticks, for example, and encountered no ice patches on that mild day.) I was scrutinizing alike the twisting bleached-bone white of sycamore limbs against blue sky and the privet’s tiny blue-black fruit, like a smattering of punctuation randomly assigned to its thickets. I was walking fast, but still playing a favorite childhood game, imagining the world upside down. And for a moment, the sun-lit candelabras around Ellis Pond were roots, not crowns: looking up, I was looking down.

Up Polecat, then onto Northwood and up what passes for a hill in our part of Ohio. (I’ve lived here long enough to think, “Oh, a hill!” without irony.) A pause to chat with a Northwood friend, then a closing of the loop, opened that morning, to home.

But not before the second part of freedom occurred to me. It’s the ability to choose wisely, I think, and what does that mean but the imposition of constraints — useful, purposeful ones? The choice to walk the long route home was such an imposition. Actually, it was hardly one. I love the golden room of late afternoon in winter; I think of it as dusk’s anteroom, painted in that perfect glow Benjamin Moore’s “Winter Sunset Ochre” may promise, but never delivers. I love the boxy shapes of cows, hugging close to the boxy shapes of their feeding stations — a Rothko painting, say, in black and red. I love when a few of the cows turn their faces toward me; the calmness of their gaze seems to me a well of pure spirit.

Loving all this, I still often enough hesitate to take a walk. I don’t feel like it, I’m tired, I should be home and doing other things. (Talk about a well! I have a well of excuses, a fountain of eternal gripes.) A walk is a constraint, a small one, that I can impose on myself in order to feel … more free. Which also means more alive, in firm contact with the earth my boots aren’t quite so afraid of thumping, like a fist on the back of a friend. And speaking of friends, it’s sometimes a constraint to stop and talk with one — inside, the old band strikes up, Things to do, things to do, you gotta get home. But there are few things more freeing than a free and easy exchange of talk, however small. The bonds this builds aren’t bondage; rather, they’re precisely the release I long for.

Why, then, am I so apt to cling to arbitrary constraints? And why am I so slow (despite my fast gait) to embrace those constraints that I know — I know — will set me free? Reader, I don’t have an answer. In your own life, do you?