Blog: Out of Something, Nothing: My Summer as a Professional Mover, part 1

What follows is an overview of my summer as a professional mover. Initially I was bitter about the reality of the experience, but I grew to see the humor, absurdity, and sadness with a little more objectivity as time went by. The information below is 100% true.

One summer, I worked as a professional mover. It was a terrible experience. It was the worst job I’ve ever had. I worked unpredictable hours for little pay, and did little more than carry heavy stuff in and out of houses during the middle of an intolerable Ohio summer. My coworkers were some of the most unapologetically racist and sexist people I’ve ever encountered. I constantly heard and saw things that made my opinion of the human race plummet to an all-time low. My principles were challenged to the degree that I couldn’t rely on any sociological rationale to temper my extreme dislike of the people I was forced to work with. I was also bothered by the fact that I seemed to want the approval of the very people whose sleazy machismo and superannuated racial paranoia made me alternately depressed and homicidal.

That being said, I took that job because it met my very loose criteria for employment. I am a huge fan of the book Gig and its legendary forbear Working by Studs Terkel. I love the books’ behind-the-scenes accounts of hundreds of different jobs. Every single one of the essays is fascinating 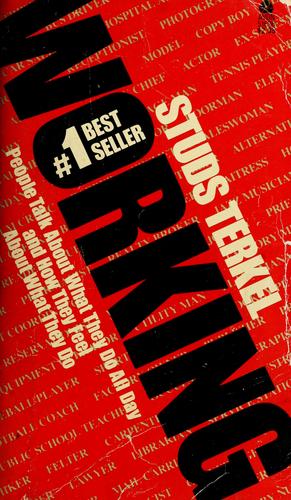 because the reality they describe is fascinating: every day, millions of working people live in a world entirely unknown to anyone except their coworkers. There are rules, jokes, entire cultures that exist only as part of specific jobs. At the time, Terkel’s books reinforced the notion that there is too much to see and experience to have only one job for the rest of your life. What’s it like to be a carpenter? An office worker? A third-shift maintenance man in a hotel? (All of which I ended up doing throughout the years.) If I had to work, why should it be in just one field?

Thus, when I saw the ad that a moving company was hiring, I applied because it was as good a job as any. I knew it would be physical work, which was great because I wanted to stay in shape, but further than that I didn’t give the job much thought. I figured I could put up with anything for the sake of learning something new. I figured I wouldn’t mind a job I didn’t like for the sake of living a Terkelian essay. I fancied myself a keen observer, a reporter of real life on assignment in real life. My sincere interest in every facet of the world would be indulged, this time in the world of professional movers. I figured that, at the very least, a random job would at least inspire an entertaining piece of nonfiction.

Indulged it was. Everything about the job was foreign to me, from the average coworker’s consistently mean-spirited behavior to the benign mechanics of how a moving service operates. I’d never done work that physically challenged me to such a degree and I’d never been threatened by someone at work before this job. I got tipped $100 on a single move, I saw dangerously unclean homes, and a coworker tried to claim a memorable scene from Goodfellas as one from his own life. I worked for a business that tolerated fights on company ground and where it wasn’t uncommon for you to go home with a discarded china cabinet or sleeper sofa or other big-ticket item. I learned that there really are people who eat the breakfast taquitos spinning under heat lamps in gas stations and that people will have you move their loose collection of guns as readily as a box of clothes. I learned some job-specific slang and saw a guy essentially yell at an old lady because he didn’t want to waste time with an unscheduled piece of furniture. I laughed (once or twice), I almost cried, and I was constantly enraged. In the same way that someone indirectly insults you by saying they like your hair/shirt/you because it’s “um, unique…,” so too was this summer very, very “unique.”

I came across the job in a weekly employment guide. I’d already applied to a handful of jobs that summer but nothing had come of it. (Aside from the Terkelian sociological imperative of trying a variety of jobs, I actually needed to work for the sake of making money.) The erotic phone service supervisor told me, annoyed, Sir, we’re looking for women to answer phones. Then I saw the quarter-page ad for a moving company. They were hiring immediately and I saw that the company was local and not some huge corporation, a bonus that put my delicate scruples at ease and further convinced me to apply. OK, I thought, I’ll check it out. I filled out an application, waited the obligatory few days before checking in, and was soon offered a position.

My friends celebrated my new job. “You’re a mover? Ha! Moving stinks! Why would you want to do that every day?” In the time it took them to laugh, I realized they were right. “Movers needed for business and residential moves,” said the ad. It was in plain language – I would be moving houses and businesses, up to fifty-five hours a week (according to the guy that hired me). I’d moved a number of times myself, and it wasn’t fun at all. Why didn’t I realize this?

But it honestly wasn’t the hard work that would ultimately wear me out. What I also should have realized was that any job where strength is required produces a very specific type of relationship between coworkers. This was clear to me as soon as I set foot in the warehouse for my initial interview, where the hiring 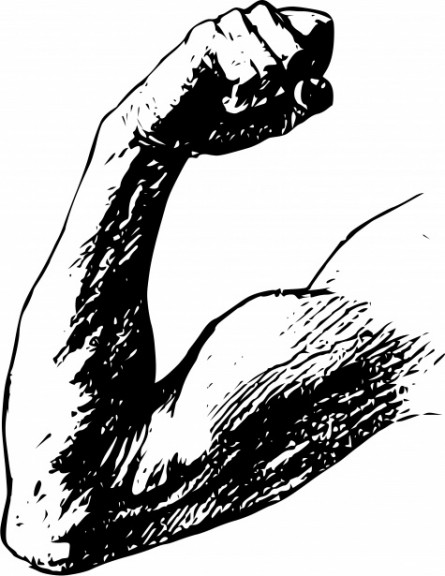 manager promptly began interrupting or ignoring me in an attempt to gain the psychological upper hand. He was already twice my size, frowning, and interviewing me for a job – how hard did he really think he had to try to intimidate me?

He was condescending and smarmy, and he was never without a sneer that bespoke utter disdain for wimps. He made a point to explain that coffee was a ‘diuretic,’ using the word to demonstrate his expertise in all aspects of physical labor, and as a way to show he was smarter than me by using a science word. He made sure I knew he was a Marine right away; perhaps it was his military training that programmed his psyche into thinking that some sort of dominance has to be established in every interaction. He was always making odd, insulting jokes towards other employees, laughing haughtily or acting totally disinterested when someone tried to talk to him, or pretending that any question addressed to him was a huge burden to answer even though he was supposed to be an approachable boss. The only mental control I felt that he had over me was that he made me want to start yelling at him for adopting that personality out of the millions available to him. “Get over yourself!” I would think, “Just enjoy your life! You’ll feel better by being pleasant!”

But things can get really ugly when confrontation-seeking macho bluster is not used as a weapon but as a way to bond. Auras of masculinity seem to feed off of each other, prodding a game of crass one-upmanship that would be comical if it weren’t so demeaning to basically everyone on Earth. For example, this is how my first day went, recounted with no exaggeration or embellishment whatsoever:

I showed up, parked in the wrong lot, got stared down uncomfortably as a result, and was whisked as part of a three-man crew to the house of this lady who kept all of the appliances she owned in the last ten years. She had a collection of at least five washing machines, four ovens, and three fridges (and more!) in addition to the appliances currently in use. That first move introduced me to the reality of the job, which was essentially to chip away at mountains of heavy stuff that show no sign of decreasing no matter how hard and fast you work. It was also my first introduction to the bafflingly reflexive sexism and racism of my average coworker. The client had the misfortune of being a woman and black in this situation, which led to an explosion of backwoods insanity that began as soon as it possibly could. Their howling echoed in the back of the moving truck and left me mortified that I would be associated with such idiocy (to say nothing of being worried about the state of the world). I was completely stunned that there were actually people who still thought like that. Fortunately, she didn’t seem to hear them as she was very friendly the whole time we were there, going as far as to buy us lunch and tip us. I thought maybe she was just biding her time, putting on a happy face until she snuck up and shot us, an action for which I wouldn’t have blamed her.

Thus began my four months as a mover. I was by default associated with anything my coworkers did, and I was by default responsible for the well-being of each client’s lifetime of possessions. It was an odd circle – I would dive into the work as a way to avoid interacting with my coworkers, but the amount of work you do directly inspires a sort of competition with them, which then results in the very interactions I was trying to avoid in the first place. This kind of thing had been happening long before I had gotten there, and would continue long after I left, but was to me, in my sheltered and generally polite world, totally distressing to see that this was in fact how the world worked.

Coming next week! The mechanics of moving – how do two people move a piano? What happens when a house is too gross to enter? How many sizes too big was my uniform?