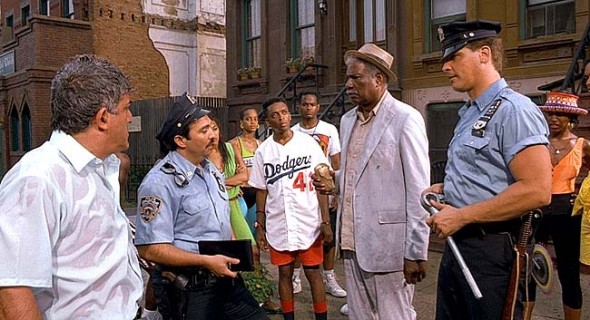 “Do the Right Thing,” an acclaimed 1989 film by director Spike Lee (center in Dodgers jersey), will be shown this Saturday, Feb. 20, at 11 a.m. at the Little Art Theatre. The film, which is free and open to the public, is part of the Black History Month film series sponsored by the 365 Group and Yellow Springs Young People of Color. (Still from Do the Right Thing)

When the film “Do the Right Thing,” written and directed by the African-American filmmaker Spike Lee, came out in 1989, some critics worried it would cause a race riot. Sparked by real life unrest following the police shooting of a black man in Brooklyn, the film focuses on simmering racial tensions on the hottest day of the year in a similar Brooklyn neighborhood, tensions that culminate in a tragic and violent ending.

And yet from most critics, the film earned high marks. According to the late critic Roger Ebert, director Lee had done “an almost impossible thing, made a movie about race in America that empathized with all the participants.”

“The thing is, there are no answers,” Ebert wrote. “There may be heroes and villains, but on this ordinary street in Brooklyn they don’t conveniently turn up wearing labels … Racism is so deeply ingrained in our society that the disease itself creates mischief, while most blacks and whites alike are only onlookers.”

This Saturday, villagers have an opportunity to both see the now-iconic film, which mirrors today’s racial tensions, and discuss it, at a free screening at 11 a.m. at the Little Art Theatre. The film is part of a series of four films being shown to recognize Black History Month by the 365 Group and the Yellow Springs Young People of Color.

“I hope we have a courageous discussion on race,” said Basim Blunt of the 365 Group, who will moderate the discussion following the film.

Providing opportunities for such conversations is one goal of the 365 Group, according to John Gudgel, who defines a “courageous conversation” on race as one in which people may be uncomfortable yet feel safe and trusting, while knowing they aren’t expected to solve the issue.

“We don’t do enough courageous conversations, and we’re trying to create forums for that to happen,” Gudgel said.

The film is the third in a series of four films presented this month, with the next, the 1943 “Stormy Weather,” to screen next Saturday, Feb. 27, at 1 p.m. Previously, the 1959 “Imitation of Life,” and the 1989 “Glory,” about black soldiers during the Civil War, have shown.

Along with sparking conversation, organizers Blunt, Gudgel, David Perry and Bill Randolph hope the films help villagers, and especially young people, learn more about films made by, and starring, African Americans. The topic is especially relevant in a year in which the Oscar nominations have provoked controversy since they include no black actors or filmmakers.

“There’s a wealth of movies directed, and acted in, by black people and we’re trying to expose people to those,” said Perry.

To Perry and Gudgel, who both grew up in Yellow Springs, it’s especially important to hold conversations about race in the village. When the two men were young, the African American community in the village was robust, with blacks holding leadership positions and making significant contributions to life in the village.

But the black population in town has declined considerably since then, from almost 30 percent of villagers in 1970 to less than 10 percent in 2010. And with that decline in numbers has come a decline in the voices of black Yellow Springers, according to Perry.

“It feels that blacks could discuss things more freely back then,” Perry said.

For instance, one topic less freely discussed is racism in Yellow Springs, Perry believes. While the village prides itself on its tolerance and respect for diversity, he feels that racism, of a subtle variety, has always had a presence here.

“Ever since I’ve been here, there’s been a hidden racial problem,” he said. “Everyone thinks there’s no problem, but there’s a problem here.”

Blatant racism could be seen in the village’s early segregated schools, and the Little Art Theatre’s separate seating areas for blacks and whites, which only ended in the mid 1940s. And today more subtle racism can be seen in local economic pressures and a housing market that has priced many blacks out of the village, he believes.

However, Blunt, who is also African American and moved to town with his wife and son several years ago, has had a different experience in Yellow Springs.

“I fell in love with Yellow Springs,” he said, stating that he feels considerable acceptance from whites in the village. “What makes Yellow Springs special? People continually tell us, what do you want to bring to the table?”

What Blunt and his 365 colleagues are bringing to the table this month is the film series, and the opportunities for more conversations between blacks and whites in the village. While group members are embracing the opportunity to shine a light on African-American history with the films, they also want to remind villagers that these issues are relevant continually.