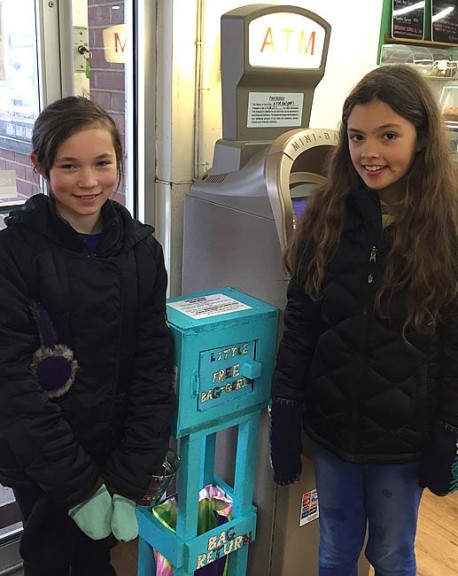 Lily Rainey, 12, left, and Carina Basora, 11, stand next to the baggerie they installed at Tom’s Market, which allows patrons to borrow and return canvas bags. The baggerie was built as part of their team’s participation in the First Lego League competition, and reflects the competition’s theme of dealing with trash. The team was inspired to reduce the use of plastic grocery bags, which they found through research to be immensely harmful to the earth, its animals and its people. (submitted Photo)

Their future’s in the (reusable) bag

The Super Snack Snatchers, Mills Lawn Elementary School’s First Lego League (FLL) team, has built and installed a baggerie in Tom’s Market. The baggerie is a sort of bag lending library, offering reusable bags to shoppers who have forgotten to bring theirs. It has compartments to dispense and return the bags, and is the first of a few baggeries the team plans to install in village shops.
The baggerie reflects a core aspect of FLL participation, as all teams must complete a project that addresses the theme of that year’s competition, which was “Trash,” and how to reduce it. But it also reflects the team members’ newfound awareness of the myriad problems trash creates in the world.

The First Lego League is an international competition in which teams of students design and build robots out of Legos and program them to do tasks in a competitive environment. As per the 2015 theme, the robots the Snack Snatchers programmed at the regional competition were tasked with picking up bits of Lego trash, and the project component was geared around the same.

“The fascinating world of trash” is a theme that the eight members of the Super Snack Snatchers found particularly resonant once they realized how far varied and far reaching the trash problem actually is.

“I really didn’t even realize how much trash was hurting the Earth,” said team member Lily Rainey, 12.

This is where the baggerie comes in. The team decided to tackle the problem of plastic grocery bags after seeing the documentary “Bag It.” It takes 500 years to degrade one bag, said team member Nicholas “Nick” Calfee, 12. Carina Basora, 11, added that even then it only degrades to small plastic pellets that end up swirling around as part of the “trash continent” that has formed in the Pacific Ocean. And the trash continent is the size of the United States, she said.
Sea turtles consume plastic bags because they think they are jellyfish, said Rainey, and bags and other pieces of plastic are often found in the stomachs of birds as well. Animals that eat bags are in turn eaten by larger animals, and eventually humans. The chemicals used to make the bags are transferred through the food chain.

“How many plastic bags have you eaten?” Calfee asked.

“It’s kind of scary when you think about it,” said Basora.

Upon learning this, the team decided that plastic bag use must diminish. Every time a plastic bag is used, one has to replace it, so the aim became preempting the need for plastic bags in the first place. The team struck upon the idea of the baggerie, and Tom’s Market expressed interest in hosting the inaugural baggerie. The team is currently in talks to install baggeries in Asanda and the Emporium, and is writing a grant proposal to get funding for more baggeries and financing to wash the reusable bags at the laundromat.

The baggerie idea was officially lauded as a great idea at the most recent FLL competition. The team presented the baggerie in skit format at regional and district tournaments at Yellow Springs High School and Sinclair Community College, respectively. While the team was just shy of moving to the next round in the robotics part of the competition, their skit won the award for “Best Presentation.”

Calfee cited the excellent “rewind” sound effect used in the skit as key to their victory, though other members of the team maintained that their in-depth research and the elegant solution provided by the baggerie was of equal importance.

Learning together and working on FLL projects as a team has been a fun and energizing experience for everyone involved. Basora reported loving Legos from an early age and appreciated the chance to build competitively with them. The baggerie was built by Rainey and her dad, and then painted by Basora. Plus, there’s the abundance of snacks at their practices: the team’s name reflects how crucial they are to the team’s existence.

“Our practices don’t run unless we have snacks,” said Snack Snatcher Sam Anderson, 12.

All snacks considered, the team was very serious about what they learned and applying the lessons to their lives.

The team made sure that this reporter and the YS News readership walked away from the project understanding one thing: if everyone in the United States used reusable canvas bags, that would be one trillion fewer plastic bags produced every year.

“Please use the baggerie,” said Calfee. “It’s a very friendly way of illuminating [the problem of] plastic bags which are killing animals and polluting the earth. I learned that even the smallest things can make a difference in the world if you try.”

The team will be hosting a bag drive in front of Sunrise Café on Saturday, Feb. 6, from 2–3 p.m. Anyone who donates a reusable tote bag will be given a cookie or two, which are being made by the team members. The team respectfully requests no plastic bags.