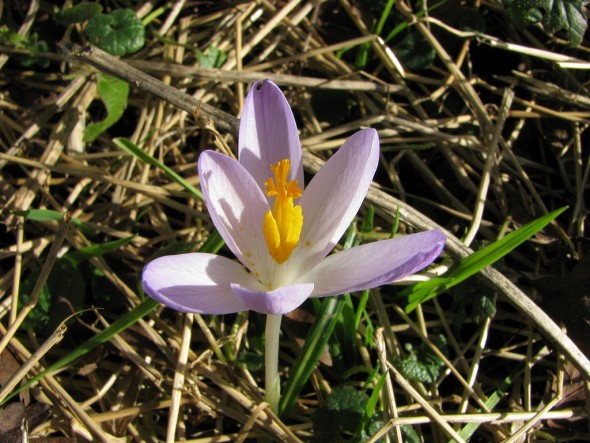 The world's own birthday crown, worn proudly and multitudinously in early March. (Photo by Martyn M, via Wikipedia)

As a kid, I felt shy on my birthday. I was excited, of course, but also fearful of the attention — exposure? — birthdays brought. The whole class singing me the birthday song. Cupcakes baked for me. All those cards, or the big card that everyone signed, some in fat letters in prominent spaces, others in tiny script squeezed into a corner. I wanted to squeeze into a corner, or better yet, turn one. Tomorrow would be the day-after-my-birthday: a beautifully ordinary day.

The childhood cake is long stale, but I’m stuck eating the leftovers. That is, I still feel conspicuous on my birthday. I feel the way I do when I have a brand-new haircut: nervous that everyone will notice, even people who don’t know me. Somehow “new haircut” will announce itself. Somehow “it’s her birthday” will be stamped on my forehead, or written in the sky with a big sky-arrow pointing down. Does this border on a sort of pleasant paranoia, a birthday persecution complex? It might.

The point is, it’s my birthday! It is. Or rather, it was. By the time this sees print, my birthday will be a couple days past. That’s the best place for a birthday to be. I don’t mind if I get birthday greetings late. In fact, I prefer it. Wish me a belated happy birthday on March 5, and I’m not the least discomfited. Because I’m no longer the birthday girl, I’m happy to convey your greetings to her. Me? I’m just the birthday ambassador, a role that suits.

This year, on my actual birthday, I woke up aware, as always, that this was the day. I waited for the flush and palpitations to follow. Instead, lying in our dark room, beloved husband beside me and beloved moon shining through the skylight, I felt … calm. Neutral. “It’s my birthday!” I said, to no one in particular. No one nodded. No one clapped his or her hands. No one sang. Thank you, no one, I said, and took a little bow without leaving my bed.

Perhaps because of this attention from no one, I felt uncharacteristically braced for the world’s attention. I began to wonder if my embarrassment over the birthday fuss (What fuss? said the moon, I’m always just shining) might actually be embarrassment over wanting and secretly liking such fuss. Could it be that my birthday-aversion was really a form of birthday-love?

Today — sorry, an unspecified day earlier this week — when I stepped into the great world that just now is turning its face toward spring, the birds were calling, calling. Oh, I know they weren’t calling my name. But suppose they were? Suppose the world is always calling my name, and yours, and not just on my birthday, nor just on yours?

Before I left the house, I adjusted my birthday crown — you know, the invisible one that everybody can see. I remembered walking home from the bus stop on my fifteenth birthday, feeling so unaccountably happy under the spring sky. The sky wasn’t pointing then, except in the rare but thrilling way that sometimes happened in P.E. Me? You’re picking me? I left the house today in the same spirit. The world picked me. And on my birthday! What a gift. (P.S. It’s March 1.)