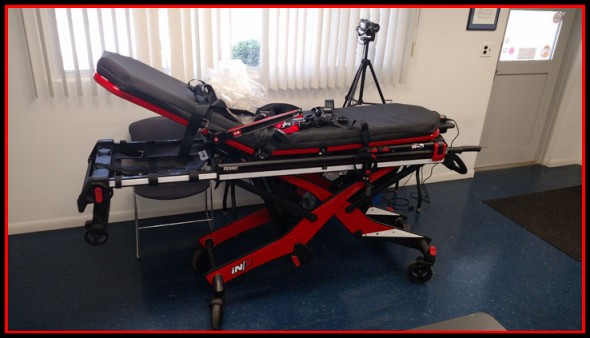 The other day I learned an interesting statistic. I learned that a significant percentage of injuries sustained by firefighters stem from straining their backs, specifically while carrying people on stretchers. In addition to the weight of the person being transported, the average cot weighs around 90 pounds, making for a heavy cargo to carry up and down stairs or lift over top of obstructions. Miami Township Fire and Rescue chief Colin Altman said the MTFR responds to around 800 calls per year, and only around 15 percent of those don’t involve transporting someone via stretcher.

Fortunately for those being transported and very fortunately for the backs of the MTFR crew, the department recently got a new cot that will take some of the strain for them. The new cot is a brand new power cot, a cot with a hydraulic lift system capable of hoisting 700 pounds. The futuristic device – called the iN∫X (officially pronounced “in-ex,” or “INXS” by Altman) – gleams black and fire engine red.

Unlike traditional cots (and even some newer power cots), the MTFR’s new device is built so that each side’s set of wheels can retract and extend independently of the other. This means that the cot can navigate stairs or anywhere with a big height differential (like going in and out of the ambulance), as one set of wheels will extend, touch the ground, and be followed by the other side, eliminating the need for the rescuers to walk the entire weight of the cot and its passenger down the stairs themselves. The extendable sides can also be used to step over obstacles like highway dividers. Of course, said Altman, the hydraulics mean that the new cot weighs double a normal cot, but the greatly reduced need for lifting makes this extra weight manageable.

Altman saw this particular model at a trade show last year and was sufficiently impressed that he decided to use some of the department’s annual budget to purchase one. The cot’s cost is as impressive as its capabilities: one iN∫X power cot costs around $30,000. Fortunately, and remarkably, a third of the bill was footed by the surprise donation of an anonymous citizen, “who just came into the department one day and wrote a $10,000 check.”

The crew is learning all about the cot’s features, though Altman said he is the only one who hasn’t gotten to play with it at length yet. (Cot rides are unfortunately not available to the public.) The manufacturer will be paying a visit to the station soon for a training seminar. The cot, like most of the emergency and fire equipment used by MTFR, will be inspected and serviced every six months. For liability purposes, Altman said.

“Liability issues have gotten more complex as the years go by, just like equipment has,” he said.

Previous cots could be cleaned by “just be hosing them down,” but the cleaning process appropriate for the power cot is still to be determined. Altman did note, however, that they have a “barrel of special wipes with cleaning product that kills almost everything,” and that will probably suffice.

The new cot will soon be joined by its partner, a brand new ambulance. New ambulances are made to order (two of the country’s roughly 30 ambulance manufacturers are in Ohio), and MTFR’s is almost done. One of the last steps is fitting the ambulance with a rack specifically for the cot, which allows it to slide in neatly and securely. The mount will also serve as a way to charge the cot, as the hydraulic system is battery-powered.

Altman said MTFR aims to buy a second power cot in the future, and would have its other ambulance fitted to accommodate it as well. The department can apply for a grant to buy a cot through the Bureau of Workers’ Compensation. Power cots are at the top of the list of things to receive BWC grants, owing to the amount of injuries associated with hefting.

When asked if there is a blessing or welcoming-type ceremony for such an impressive and helpful piece of equipment, Altman said no. The arrival of the new ambulance will be heralded with some kind of ritual, he said, but that’s partly because it cost $190,000.