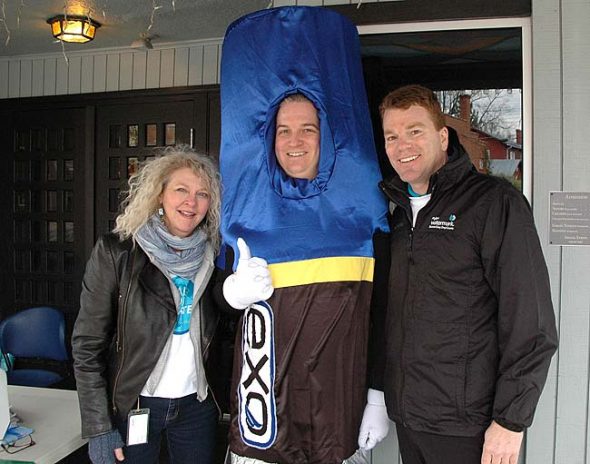 YSI/Xylem employees in Yellow Springs recently did a “Walk for Water” from the YSI campus to the Little Art Theatre to raise funds for Xylem’s global water philanthropy. From left, local YSI/Xylem employee Anita Brown, employee Tim Benson (in costume) and Colin Sabol, president of Xylem Analytics and Treatment. (Photo by Audrey Hackett)

Water is the focus of Xylem giving

Village resident Tim Benson stood outside the Little Art Theatre last Wednesday in a tall blue and black fabric costume with the word “Exo” sewn down one side and silver flaps dangling past his knees. His wife, Andrea, who makes dresses for Iona Boutique, created the costume, he said. But what exactly was it?

Benson was dressed as an “Exo sonde,” a water quality monitoring platform developed here in Yellow Springs by YSI/Xylem. He was one of about 150 employees from the local company — albeit the most strikingly dressed of the bunch — who took part in a “Walk for Water” event last Wednesday. Participating employees walked, in shifts, the 1.5 miles from YSI/Xylem, just south of Yellow Springs, to the Little Art in the center of town and back again. The walk and related events, designed to educate employees and the public about the global water crisis, raised $1,300 in employee contributions, according to YSI/Xylem Executive Assistant Anita Brown, an organizer of the event. A company match of 200 percent brought those contributions up to $3,900, she said.

The money will help fund the work of Xylem Watermark, a corporate citizenship and social investment program. Since its inception in 2008, the program has invested $17 million in water- and sanitation-related projects around the world that have helped 3 million people, according to Xylem Analytics and Treatment President Colin Sabol, who is also the current chair of Xylem Watermark.

“We bring clean water and sanitation services to communities that don’t have access to them,” said Sabol, who was in town for executive meetings at YSI and took part in Wednesday’s events. Xylem Watermark’s efforts center around schools, he added, because in many areas of the world water — directly or indirectly — is a key reason children don’t attend school. Globally, millions of children are sick because of water-borne illnesses, he said, and in many countries girls spend hours a day collecting and carrying water — at the expense of schooling.

A second area of focus, he said, is disaster response. Xylem Watermark provides emergency water services and helps countries rebuild after events that destroy their water systems, he said, as Xylem did in the aftermath of the 2011 tsunami in Japan.

The company’s focus on water-related charitable causes fits with its business, he added.

“We’ve decided as a company we want to try to align the good we do with the business we do,” he explained. “We make instruments and equipment to clean and test and move water. Our philanthropic effort ties in with that.”

Xylem, a $3.9 billion dollar global water technology company, acquired YSI in 2011. (Xylem was then known as ITT.) Today, YSI is the biggest brand in Xylem Analytics, one of the company’s five business units, said Sabol, as well as a center for research and development for the unit.

YSI/Xylem is thriving, said Sabol. The business is “even more important to Xylem than on the day we acquired it” five years ago, he said. And that thriving adds property and income tax dollars to village coffers.

But one consequence of the acquisition has been a shift away from local philanthropy in favor of the global water issues highlighted during last Wednesday’s walk. The YSI Foundation was closed in 2012; during its 20 years of operation, it gave out $2.8 million to Yellow Springs and Dayton area organizations and matched an additional $73,000 in employee giving, according to previous News reports. Nothing comparable has taken its place.

“We recognize it creates a void in local communities,” Sabol said, referring to the company’s prioritizing of global water issues over local giving.

But he said Xylem does encourage its 12,500 global employees to stay active in their communities. To this end, it has set a companywide goal of 100,000 hours of employee volunteer time over the next three years, or at least three hours per employee annually. Much of this volunteerism is geared toward Xylem Watermark’s overseas projects, but it could also involve water-related outreach and activities in local communities, he said.

Here in Yellow Springs, said Brown, YSI/Xylem employees participate in water programs in the local schools and are active in local water testing and clean-up efforts. On June 4, for example, employees will take part in the Little Miami River Kleeners’ annual “Kleen Sweep” event, which begins at John Bryan State Park. A bit further afield, the company has been a sponsor of the Dayton Children’s Water Festival, on the University of Dayton campus, for several years, and will continue its support for the festival this May.

“We haven’t stopped doing things,” said Brown. “But the things we do are more in the field of water.”