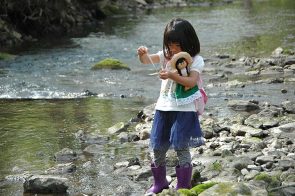 Antioch School Forest Kindergarten— Where the wild things are

As the 2015-16 school year heads into its final month, the Kindergarten group at Antioch School has succeeded in beginning every school week exploring, playing and learning out-of-doors. They call it Forest Kindergarten.

Rain or shine — or for that matter, snow, wind or fog — regardless of the weather, the 5- and 6-year-olds have gathered each Monday morning down the hill from the school building at a copse of trees and brush that has become their outdoor classroom.

Part laboratory, part playground, the overgrown grove is lined with well-worn paths that circle around to a central spot where sitting logs are arranged around a fire pit and an old tarp is tied between the trees for shelter. Here, the children gather with their teacher, Lindie Keaton, to eat, tell stories and learn about themselves and the world.

Much of the learning comes through exploration and play, with direct instruction occurring organically within the context of the children’s interests and development. The approach is a reflection of the philosophical model pursued by the entire school, only moved outside.

“For us, it’s a small stretch,” said Keaton, who has been the Antioch School’s Kindergarten teacher for 10 years, after beginning her career in public schools. Not only does Forest Kindergarten embody the school’s educational ideals, but it also builds on Keaton’s own classroom organization. “I’ve never had a day where we didn’t go outside,” she said. Also, her class, like others at the school, “has taken weekly hikes in the Glen for many years.”

The Forest Kindergarten model began decades ago in Europe, spreading from its well-received introduction in Norway, where a shortage of classroom space first prompted the outdoor initiative. Keaton said the concept is beginning to appear elsewhere in the United States as well, with schools shaping the program to reflect their individual institutional goals.

Keaton said she had been aware of the model since her own now 17-year-old son was in the nursery group at Antioch School, having read about it in an article the nursery teacher had clipped and posted on a bulletin board. She also has formative memories of attending a youth camp where there was “a forest home.” Then, in recent years, she pursued continuing education courses with the National Outdoor Leadership School. All of that coalesced into inaugurating the Kindergarten Forest program at Antioch School this year.

“I decided I wanted to have more of an extended time out-of-doors,” she said.

As for dealing with the weather, “we use the Alaskan rule,” she said. “As long as it’s 20-below or above, we go outside.”

This year’s Kindergarten class has 10 students — 12 is the limit. They’re assisted by first-year Antioch College student Bailey Bermond, who worked part time with the class earlier in the year through the Miller Fellows program and is this term spending her first co-op working full time with the children.

“It’s so lovely,” she said of the class’s outdoor program. “I feel so lucky.”

After gathering each Monday at the Forest Kindergarten classroom, the day begins with a hike into Glen Helen Nature Preserve, just across Corry Street from the school. On a recent Monday, several students of the Younger Group joined the Kindergartners on an excursion to “the beach,” a stream tributary of the Little Miami River. With Keaton in the lead and Younger Group teacher Christine Lipari-Althaus bringing up the rear, 12 children trooped off across the road — holding hands and looking left, right, and left again — before heading down a familiar wooded path.

This day was a glorious spring gift, where the warm temperature and cloudless blue sky reminded teacher Keaton that the season for hats and sunscreen was at hand.

Venturing into the same piece of forest every week offers the chance to witness all the seasonal changes that occur. “We see things we didn’t see before,” said kindergartner Elijah Moon. It wasn’t so long ago, they were “walking in snow,” he said.

The students already knew some of the newly growing plants. Oskar Dennis identified invasive garlic mustard — showing a visitor that the leaves were edible — and Kaede Eto pointed out the big leaves of the skunk cabbage. A running joke was born when another student called out “skunk!” and paused just long enough to make everyone jump back, before adding “cabbage.”

On this day, besides the garlic mustard and skunk … cabbage, tender wildflowers were appearing along the path as well. Keaton had brought along a field guide to help with identification. A Jack in the Pulpit and trillium were found, while the steady knocking of a woodpecker echoed from a nearby tree.

Down by the stream, Keaton pulled out a pair of portable microscopes, a baggie of slides and some plastic eyedroppers. While the young scientists took turns peering at water samples through a microscope lens (“I saw something move!” declared Oskar), others collected the shells of fresh-water snails and clams, or explored the water’s bank. After everyone who wanted had a chance to try a microscope, the group headed back to their outdoor classroom — leaving their shell collections behind in case other creatures needed them. The return trip presented another chance to see the delicate Jack in the Pulpit and trillium as well as a coveted morel mushroom that was growing by the path — it, too, was left in its natural environment.

Back at the Forest Kindergarten classroom, everyone gathered around the fire circle for a snack of “Kindergarten trail mix” — cheerios, raisins and a little bit of chocolate; and Keaton told an original story about a fairy named Jack who couldn’t fly in the rain, but through the help of a magical blue stone found (and left) by the river, was given shelter under the distinctive flap of pulpit-shaped spring flower that now bears his name. Unstructured play time — another important part of the kindergartners’ day — followed. Some weeks, the students make their lunch together at the fire pit. Some weeks, they pack lunches and spend the whole day hiking in the Glen.

Keaton said the kindergartners’ outdoor programming has been so successful, the school staff is discussing ways to expand the concept to other age groups. One issue is establishing defined spaces for each group.

“It’s nice to have a space that you can make your own,” Keaton said. “The size of this space is just right for Kindergarten. It’s wild, and we can be wild in it.”