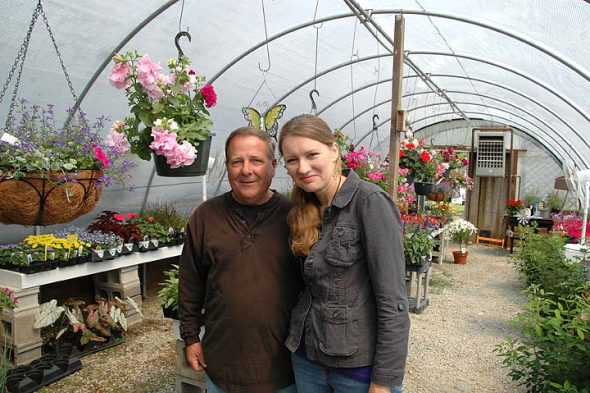 Master gardeners Steve and Karen Reed are the owners of Stoney Creek Garden Center, located just north of Yellow Springs on Route 68. Deeply aware of the legacy of Stutzman’s Nursery, which occupied the spot for many years, the Reeds are both bringing the Village-owned property back to life and making it their own. Their greenhouses include these hanging pots of fragrant double cascade petunias. (Photo by Audrey Hackett)

Rebirth of a garden center

Gardens are lessons in rebirth, and a local garden center is exemplifying this truth in more than the usual ways.

Stoney Creek Garden Center, owned and operated by master gardeners Steve and Karen Reed, opened late last month for its second spring. Located on Village-owned land that was long home to Stutzman’s Nursery, Stoney Creek is, in a sense, that nursery brought back to life in a new form. At least, that’s how the Reeds are envisioning it, and their vision is taking root, and sending up shoots, all across their plot of leased land.

“Gary Stutzman built this and we just put it back together,” Steve said on a recent sunny Sunday, referring to the longtime owner of Stutzman’s Nursery. Steve and Karen sat at a picnic table as they talked, one of several clustered together near an outdoor stage, newly built, and a small stone-lined pond, newly installed. Grass is growing underfoot where a few years ago gravel, laid down by Stutzman, predominated.

They hope to host all sorts of events at the new stage, which Steve calls their “band stand,” including early-morning yoga, pottery demonstrations and a range of garden-centered educational programs. The pond will have a water feature to add to the soundscape of the property — already rich with bird calls and the rustle of leaves.

“We want people to sit down and have plenty to hear, listen to and look at,” said Steve.

These additions are just a few of the many changes the couple is making, and planning, as they revive a property that had fallen into considerable disrepair. Yet even as they seek to reclaim the land and build a garden business that is distinctly their own, they are acutely aware of the legacy that touches every part of Stoney Creek’s landscape.

Stutzman leased the land from the Village for many years until his nursery fell prey to hard times and debt. In 2009, the nursery closed. Steve and Karen had bought plants from Stutzman for years as they landscaped their personal property, five acres in New Jasper Township south of Xenia, where they’ve lived for 17 years. In fact, they happened to stop by Stutzman’s Nursery on the very last day before the business closed. They felt terrible for the closure, they said, but it also got them thinking.

Yellow Springs Botanicals was a short-lived successor to Stutzman’s Nursery, and when it closed, the Reeds approached Village Manager Patti Bates about leasing the land. Village officials granted them a two-year lease beginning last spring.

“It’s great to have because it allows us to plan,” Steve said.

The Reeds have a business plan on file with the Village, and they’re committed to “doing what we’ve said we would do,” Steve said. “We’re keeping our fingers crossed that we’ll be allowed to stay [over the long term]. We already have a lot invested here.”

Eight-acre Stoney Creek Garden Center abuts Route 68 just north of Yellow Springs, and behind it is a second eight-acre parcel, which the Reeds sublease to Ranch Menagerie Animal Sanctuary, another transformed vestige of Stutzman’s tenure. Striking black-and-white Muscovy ducks wander over from the sanctuary, forming a living, quacking part of the garden center’s landscape. WYSO the one-eyed cat is another visitor — “our mascot,” Steve said.

Stutzman’s greenhouses are still in place, and the Reeds are steadily reclaiming and refurbishing them — some were seriously dilapidated — to grow and house their own living inventory. There’s a rose house (including Davis Austin English roses, each variety heavy with its own distinctive fragrance) and a native perennial house and an annual house; there’s a house for shade plants (hostas and astilbes grown on site) and one for vegetables and herbs, which Karen grows from seed in organic soil. Seven greenhouses are currently in use, and more are being renovated.

The wooden sign that beckons from the road is actually an original Stutzman’s Nursery sign — found on site and repurposed.

And if Steve and Karen weren’t already aware of the legacy they’re building on and seeking to transform, quite a few customers remind them.

“We get lots of visitors from the past,” said Karen. Some even come bearing Stutzman coupons that are 10 years old, Steve laughed. “It’s amazing how many people come here and say, ‘We’re so glad you’re here,’” he added.

The Reeds said they love interacting with customers. Some are tourists stopping by on a visit to Yellow Springs; others, including a growing core of regulars, are residents of the village and surrounding communities. People come to browse and buy plants, of course, but some also come simply to walk around, talk plants or take a quiet seat and watch the ducks, said Karen. The property has a tranquility that people respond to, she believes.

“We want this to be a destination, a place people will come and relax,” she said.

That’s an utterly different vibe than Lowe’s or a mega-garden center, Steve added. He and Karen aren’t seeking to compete directly with those much bigger stores, he said. Rather, they hope to offer customers “a tromp through weeds and grass,” he said, to find unusual plants, responsive service (the couple often orders plants for customers), gardening conversation and expertise.

Steve and Karen have plenty of the latter. Both are members of Greene County Master Gardeners, and were recently elected as co-presidents of that body. Karen has a particular passion for herbs and native plants, as well as expertise in herbalism, thanks to a recently acquired degree in complementary and alternative medicine. Steve is partial to succulents and cacti. “It’s really hard to kill them,” he joked.

They have each been plant and garden lovers since childhood — his spent in California, hers in Miamisburg, Ohio — though their careers have taken them in decidedly unbotanical directions. Karen works in the banking industry, currently as a project manager for Fifth Third Bank in Xenia. (“Gardening offsets corporate life,” she said.) Steve recently retired after 32 years in the Air Force; he continues teaching young cadets in the Civil Air Patrol.

Right now, Karen and Steve are Stoney Creek’s only employees, though they receive lots of help from family members. The business is open seven days a week from May to October; Steve works Monday through Friday, Karen, Saturday and Sunday. They close in the winter, but keep busy ordering seeds and growing plants in their greenhouses. And, as Gary Stutzman did before them, they closed on Street Fair last year. But this year — wait for it — they plan to stay open.

Although Karen still works full time, Stoney Creek Garden Center is something of a retirement venture for the couple — if by “retirement” you mean days filled with constant physical motion, endless chores, dirt, heat, sunburns and a fair amount of lower back pain. At some point in the summer, Steve joked, they’ll ask each other “Why didn’t we open an ice cream store?” But they love the work, they both said.

“There’s no such thing as retirement. We always want to keep doing something, and this is the something,” Karen said.

Meandering through the middle of Stoney Creek Garden Center is a dry creek bed that inspired their business’ name — a landscape feature Stutzman built his nursery around years ago. Chinese elm dot the creek’s curves. These trees were split from ice and wind when the Reeds first took over the property. Wanting to save the trees, Steve figured out a way to bolt each tree back together. The bolts are still visible in some spots; in others, the tree has begun to grow over the metal.

These trees, and Steve’s determination to save them, seem like a perfect metaphor for the work of repair and rebirth the Reeds are undertaking at Stoney Creek.

“It may sound corny, but we really believed this garden center wanted to come back,” Steve said.

3 Responses to “Rebirth of a garden center”