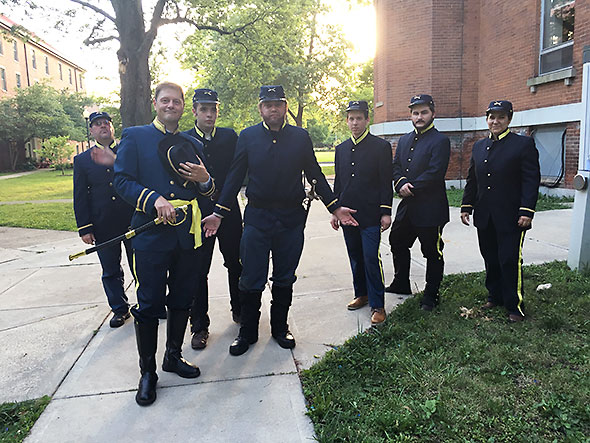 Marvelous. My Shakespearean acting debut is now in the books. We wrapped last night and began to break down that set we’ve been building up over the last three weekends. As I lingered on the main lawn, I thought back to when and how I first embraced Shakespeare. Like many school children, I read Romeo and Juliet (it’s about teenagers!), Julius Caesar (history!), and MacBeth (Shakespeare’s shortest play!). Those experiences weren’t bad; they just weren’t compelling. What sold me on the Bard was his comedies. 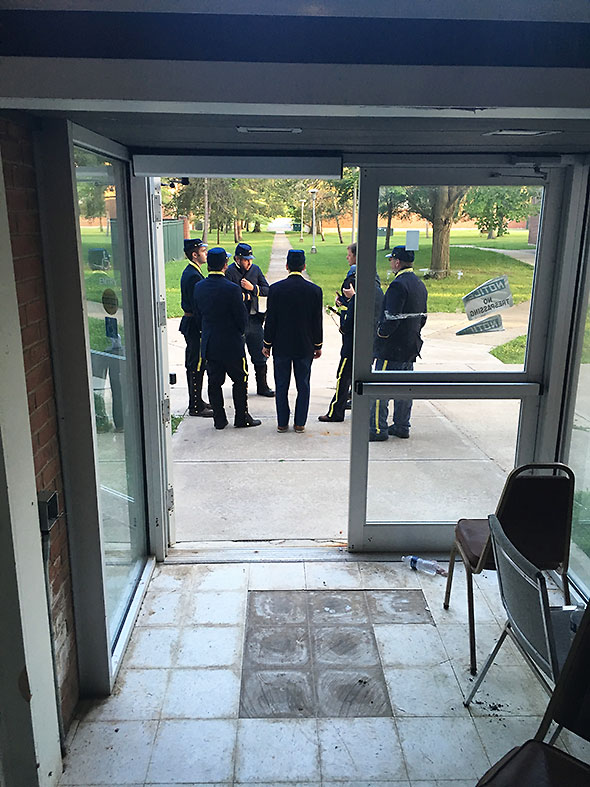 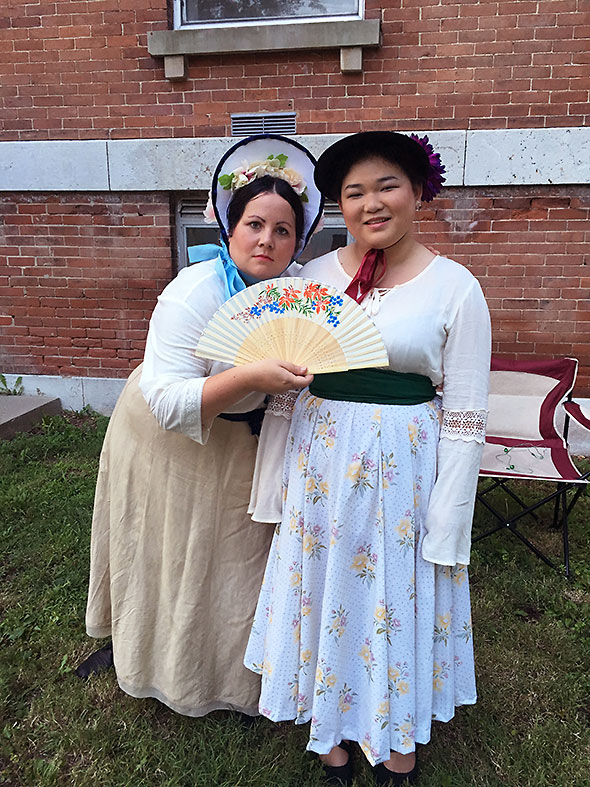 I have public television to thank for introducing me to As You Like It and the magnificent Helen Mirren. Perhaps it was the cross dressing…the fact that a woman didn’t have to be girlie girl to make her way in the world…but the familiar words also drew me in. Melancholy Jaques’s “All the world’s a stage!” resonates like a call to arms as too wise he sums up life’s many phases.

I was 12 years old when the BBC television production was broadcast in the US. Yes, it now seems strange that I would sit still for something as impenetrable as Shakespeare at that age but that strangeness comes only after several decades of exploding entertainment choices. In 1979, cable had not yet reached our household, atari had not yet reached our shore. I had spent formidable years glued to the television watching the public productions of PBS and the BBC and admiring their quality. I was rather hook on several BBC shows in fact and knew Mirren’s fellow cast member Angharad Rees from the Poldark series. 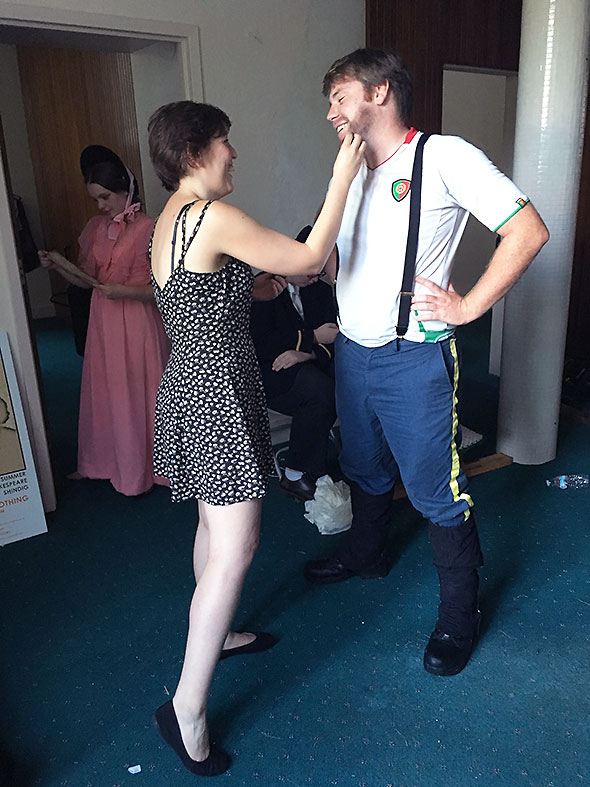 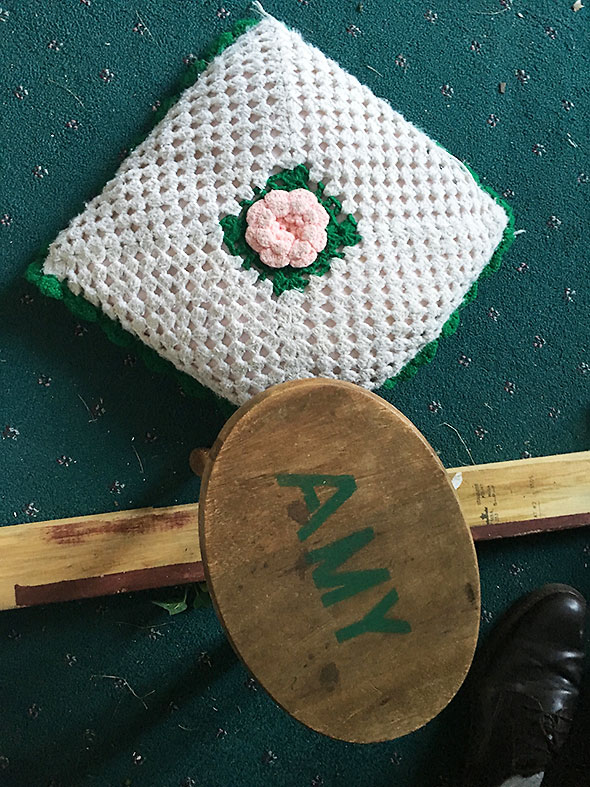 When they began in 1979, I added BBC’s Shakespeare broadcasts to my watchlist of dance programs, jazz concerts, and silver screen screwball comedies. I’d attend a play then seek out a well-annotated script to decipher the language. It was not easy going, but the exercise was interesting enough. Shakespeare’s cleverness delivered enough punch to keep my attention.

I began watching and reading plays of other authors as well and soon formed a preference for plays over novels. Plays don’t attempt to get in my head but they do give me words. I’m grateful that that most playwrights aren’t about embarrassing their characters but instead give them the perfect thing to say.

Plays are puzzles whose form is revealed only as we lift their words off of the page and attempt to hang them about the world. The words have to do more than tell a story; they have to populate a space, to give meaning beyond simple structure of three walls, chair, door, and table. They have to give up their secrets at a pace. 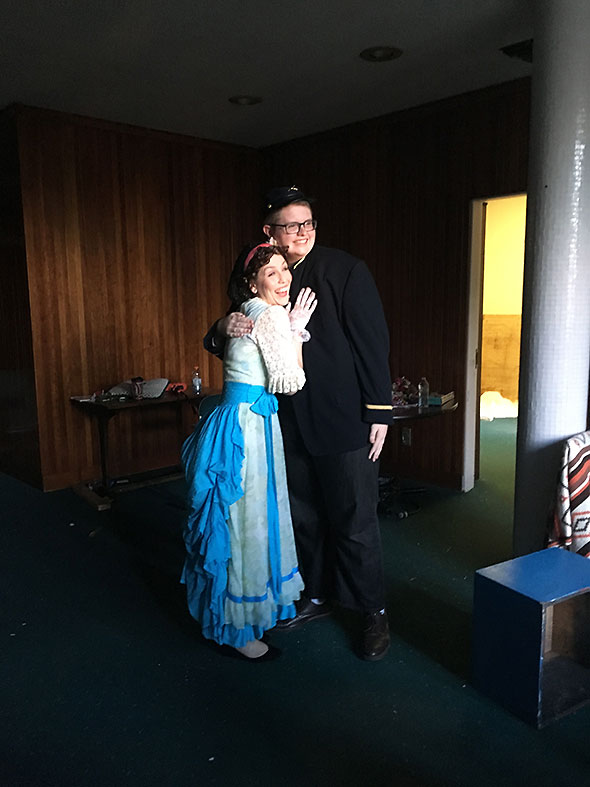 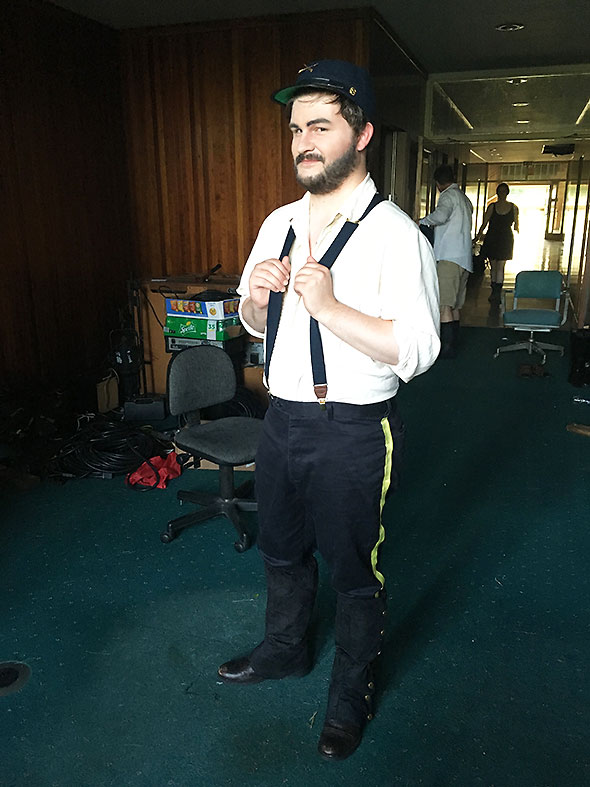 Shakespeare’s works take time and patience to parse. After reading several plays from various authors, I realize now that many scripts are punctuated with lines that are less than transparent in their purpose. These “throwaway” lines are the gems that a good acting troupe will mine. They won’t contribute to the play unless the actor who delivers them discovers their meaning usually by pairing words with physical act or object.

Among my lines in Much Ado About Nothing, I discovered one throwaway. “Have comfort, lady.” Three words in the midst of a battering exchange as the ensemble reacts to a wedding turned battleground. I have a choice. I can say the lines on cue and step out of the way or I can figure out what it means to offer comfort. 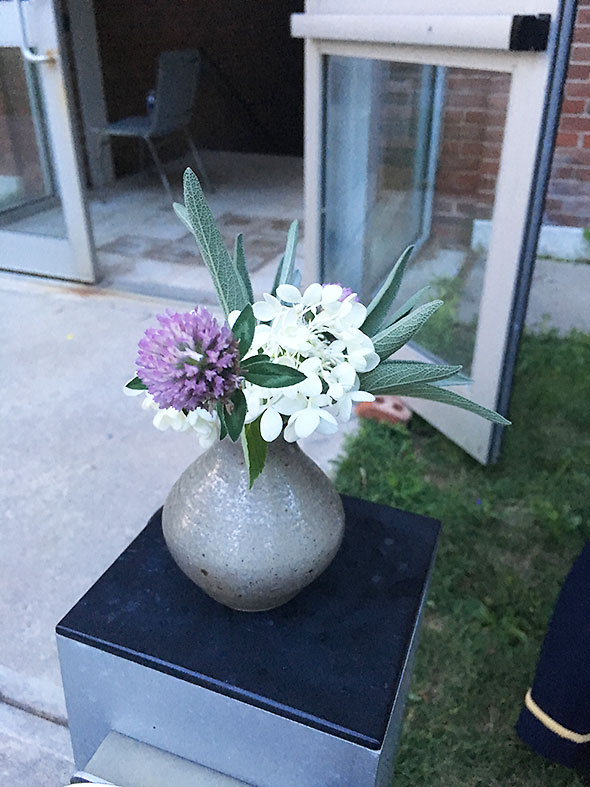 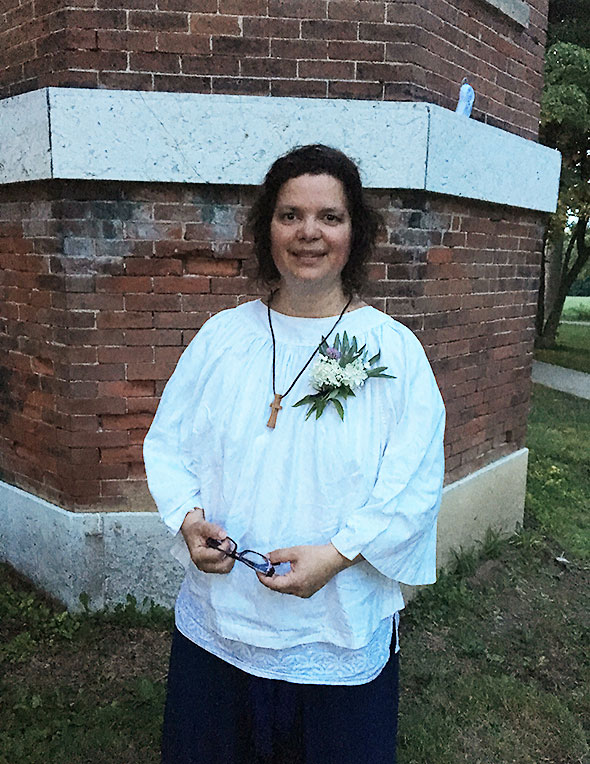 Perhaps I give Lady Hero a drink? No, that won’t work. We have limited props there out on the main lawn. It would have to be something I’d carry on my person. The wooden cross from around my neck? The prayer beads that I have strung on my belt? I tried passing Hero the prayer beads in dress rehearsal. When they wound up on the lawn at the end of the scene, I knew that I needed to try something else…something we could cast aside and not worry about losing in the grass.

Then a couple of things came together for my character. The very beginning of the play opens on an ordinary day. We decided as a cast that it’s mid morning on a Tuesday. I’m the town friar but, since it’s not Saturday or Sunday, there is no reason for me to be formally attired. Instead, I dress for the opening scene as a gardner—not unlike Brother Cadfael, one of my husband’s favorite mystery characters—who has wandered onto the main lawn fresh from the vegetable patch wearing a well-worn apron, carrying garden gloves and a basket of freshly harvested produce.

The role I’m assigned is town friar. The role I assign myself is healer, gentleman farmer who shares my wares with those in need. I make pots of mint tea for the forlorn, potato soup for the hungry. I have a garden row of cutting flowers and uphold a tradition of presenting nosegays to brides of the couples I marry. A token of sweet scented flowers and aromatic herbs. 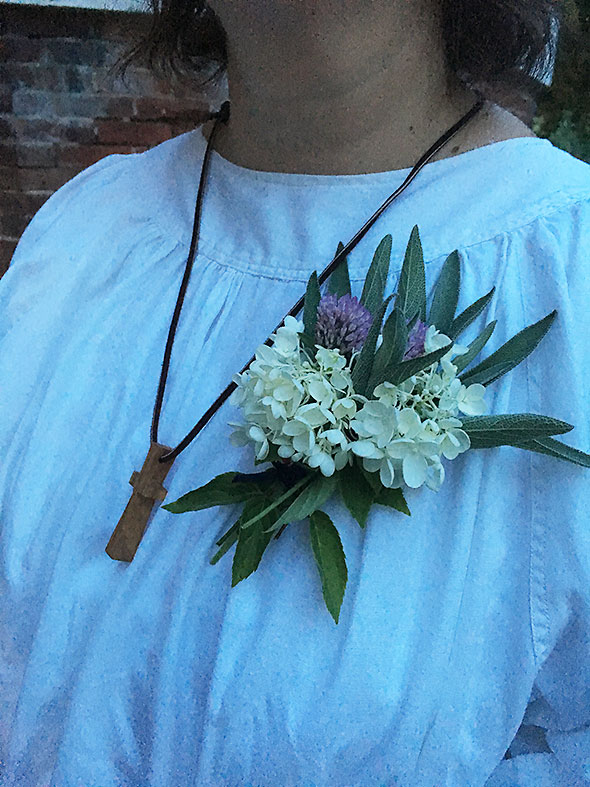 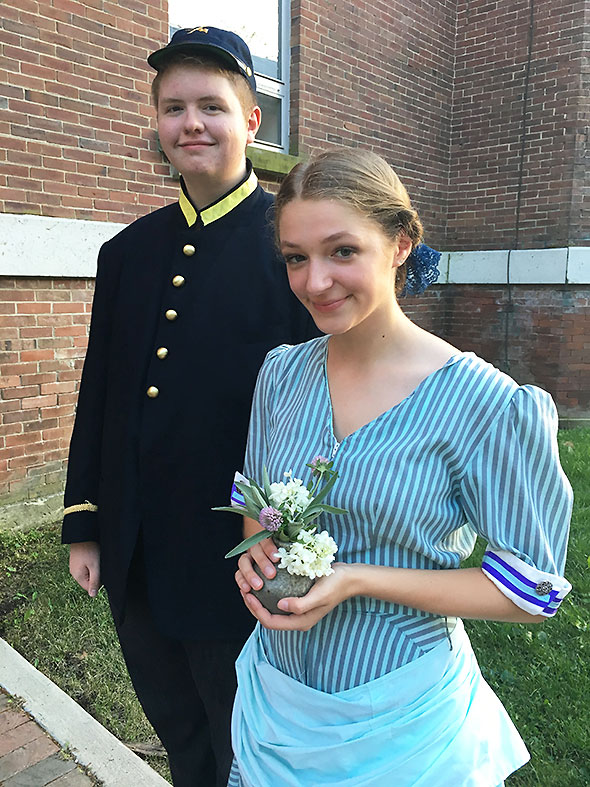 Yes, this assignment fits. When the wedding scene begins, I enter the scene with two nosegays pinned to my robe, each containing flowerheads of hydrangea and purple clover and a spray of green sage. One nosegay is destined for grace; the other disaster. The first I set on the shoulder of Hero’s best friend, Isabella, the new bride of a tall handsome soldier returned home. The second nosegay that remains pinned to my robe is destined for Hero. However, the groom confronted Hero at the alter. She is accused falsely of being untrue and unworthy. Overwhelmed by the assault of his rejection, Hero falls in dead faint. Called to her side by her cousin Beatrice, I attend the unconscious Hero and tear her nosegay from my shoulder. I bruise the sage leaves and hold the heady aromatic under the nose of the fallen Hero to revive her. She stirs, comes to as Beatrice cradles her and asks, “How now, cousin?” Hero looks up at us bewildered and I deliver my line, “Have comfort, lady.” I press the crushed flowers in her hand and leave…racing toward Hero’s mother Leonato…as if medic in the midst of an after battle triage.

That I fail utterly in giving comfort at that moment is lost on the ruffled friar, but I hope not to the audience. Later, I collect Hero to spirit her away to safety. I find the crushed flowers at her feet and shudder at innocence lost in such cruel unsparing fashion.

Pulling off this production took a lot talent. I learned a great deal about Shakespeare and meter but also emotion and the dear importance of navigating past craft into building relationships. In that full foaming sea, three simple words gave me rudder, a line to find my character and how Friar Francis fit in this brave bold world that we made.