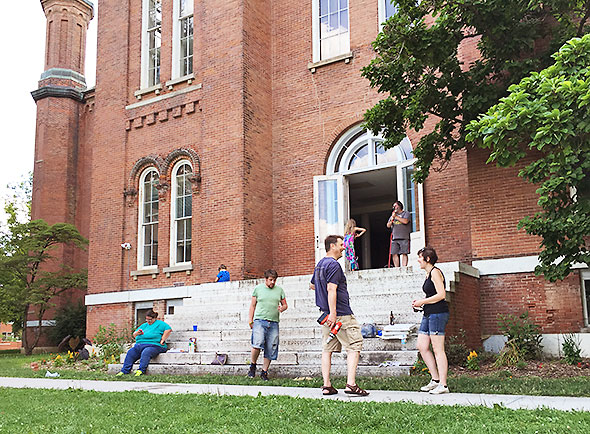 The audition was at Antioch Midwest on a Monday evening. I was passed a sonnet to read or rather to decifer. The sonnet was Shakespeare’s, number 147. Fourteen lines of Elizabethan dialect drenched in scorn and misery. Studying the form on the fly, I broke the lines into two sets of four followed by three sets of two then sifted the mood from set to set.

My love is as a fever longing still,
For that which longer nurseth the disease;
Feeding on that which doth preserve the ill,
The uncertain sickly appetite to please.

My reason, the physician to my love,
Angry that his prescriptions are not kept,
Hath left me, and I desperate now approve
Desire is death, which physic did except.

Past cure I am, now Reason is past care,
And frantic-mad with evermore unrest;

My thoughts and my discourse as madmen’s are,
At random from the truth vainly expressed;

For I have sworn thee fair, and thought thee bright,
Who art as black as hell, as dark as night. 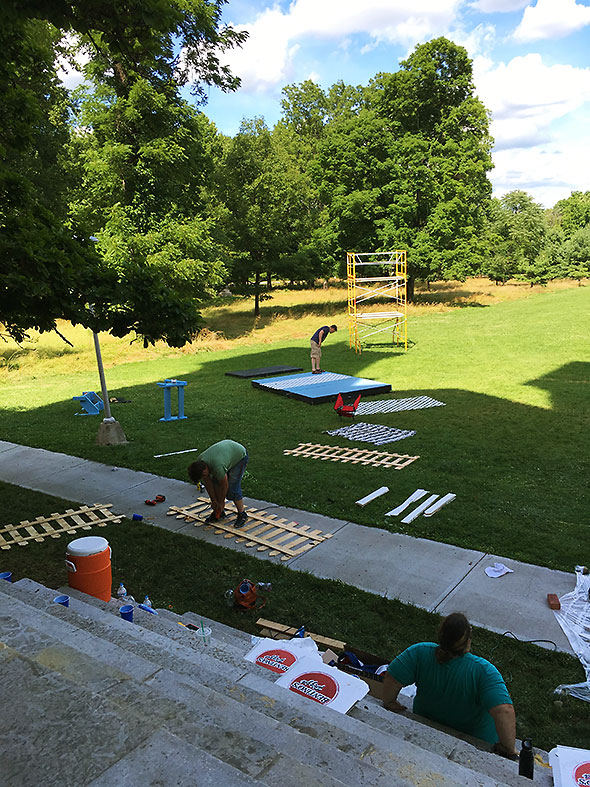 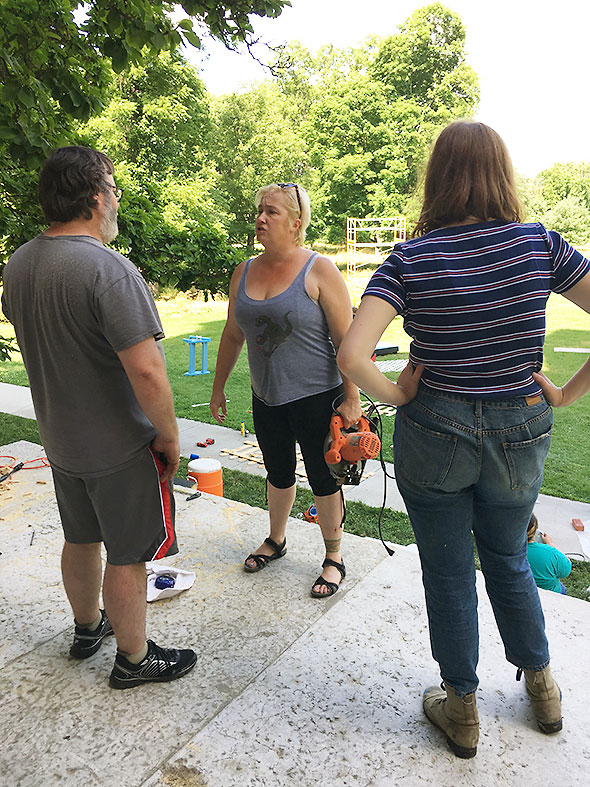 Waiting my turn, I tuned to the sonnet’s padder. I got the cadence down but, try as I might to school my tongue back into its normal northeastern lilt, the lines came out in an approximation of a BBC english accent. I couldn’t translate how I heard the lines in my head into how to say them naturally. No matter. When I hit the auditorium, I let my voice boom into the seats that rose before me and hoped for a part. A few days later, I learned I was cast and took up the task of deciphering a new set of lines intimidating in their length and meter. 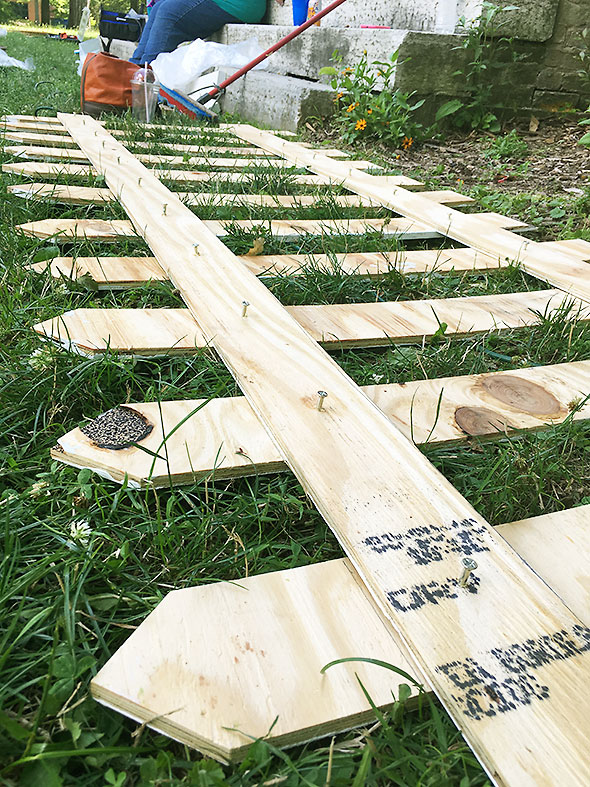 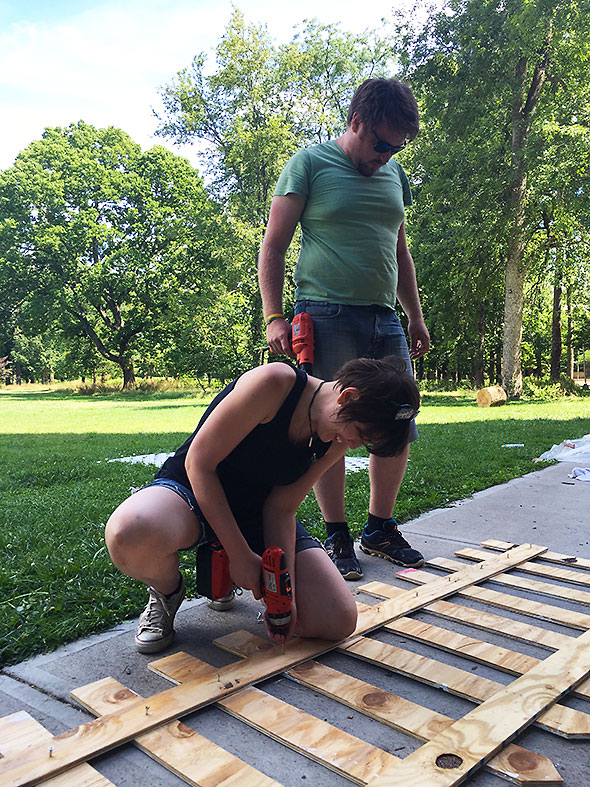 I couldn’t be happier. Much Ado About Nothing is a marvelous play. It would be just another screwball comedy if it didn’t go so fiercely for the jugular. Our interpretation is set in the mid 1800s on the return of Greene County guardsman from some intense military action in the Civil War. The men have returned from battle. The town is drunk on relief and good fortune. Love is in the air…but so too are the many slings and arrows of outrageous fortune for which William Shakespeare is well known. 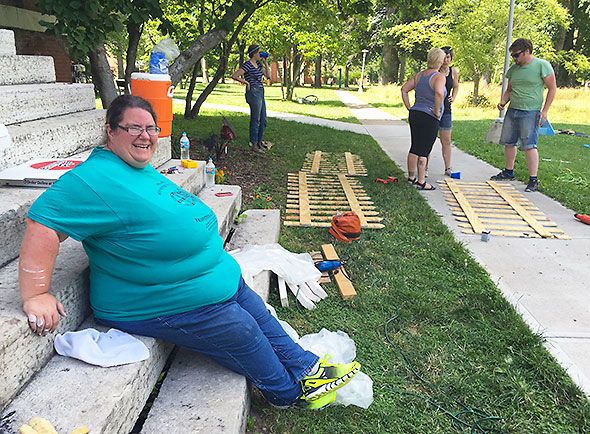 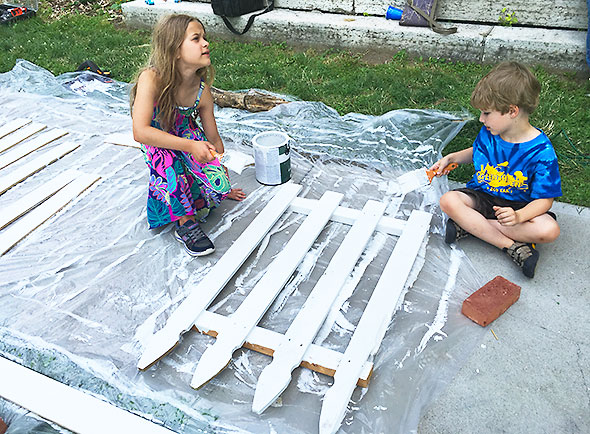 Saturday morning the cast and crew gathered at the foot of Antioch Hall on the main lawn of campus. We came to work on the set or rather the gardens of the neighborhood which our tale inhabits. There are white picket fences and climbing arbors around which lovers and conspiracies will wind.

When I arrive for set building, I take up a paint brush and join neighbor Sande Scott at the sawtooth picket fence gate. We soak our brushes in white paint and slap the vertical pickets like Tom Sawyer. Scott admits sending a picture to her friends of the Playhouse South Community Theater who are putting on the musical based on Mark Twain’s character this summer. Interrupting our work, my daughter and son take interest in our brushes so Sande and I trade the pleasure of painting with the children. Sande gives them pointers on how to load up the brushes and how to sweep the board in layers of white. 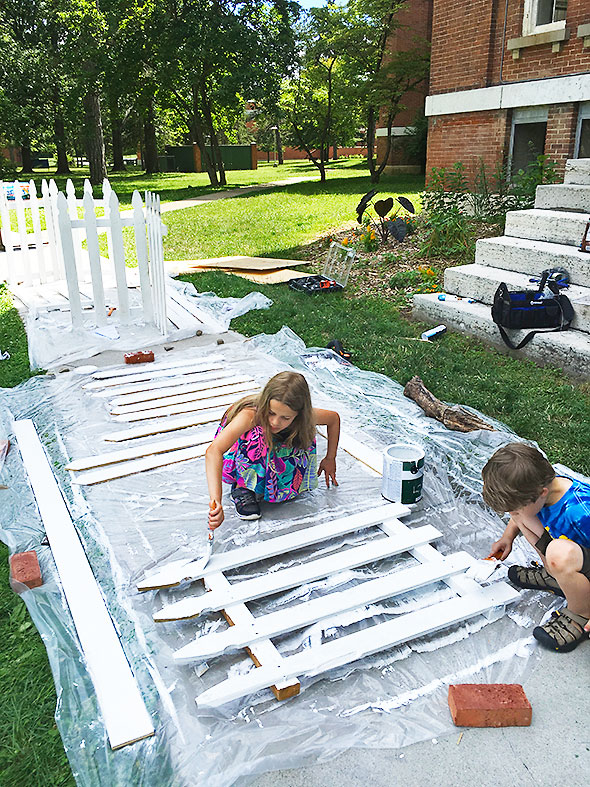 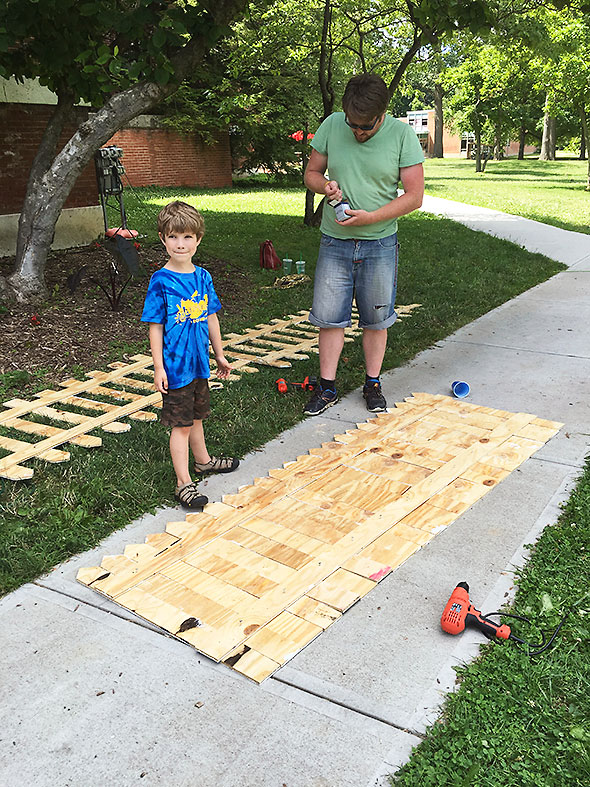 I take the free moment to wander about the lawn and peruse the various projects. My son worked intently at his tasks…painting first and then sweeping sawdust from the marble steps of Antioch Hall. My daughter would look up from her work and join me on my journey about the scene. Looking to the north side of the lawn, my daughter pointed to gray-blue platforms recognizing them as the ones she leaped down upon as a rough rider in Alice, Although. She asked how long we’d be working, and I asked them how long the crew were working on sets in their own production. I explained how we’d be adding and refining the set throughout the production much like the cherry trees and the cruise liner collected layers of embellishments during Alice’s reign at the Antioch Amphitheater. 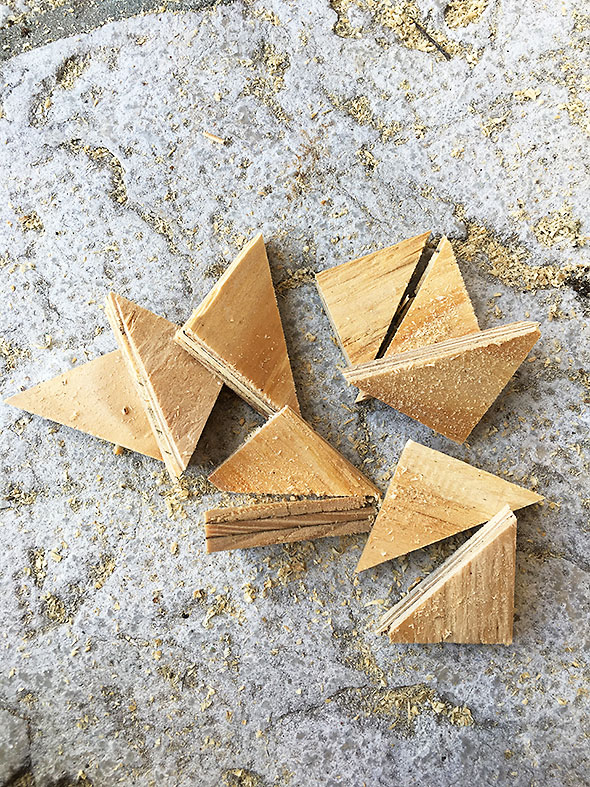 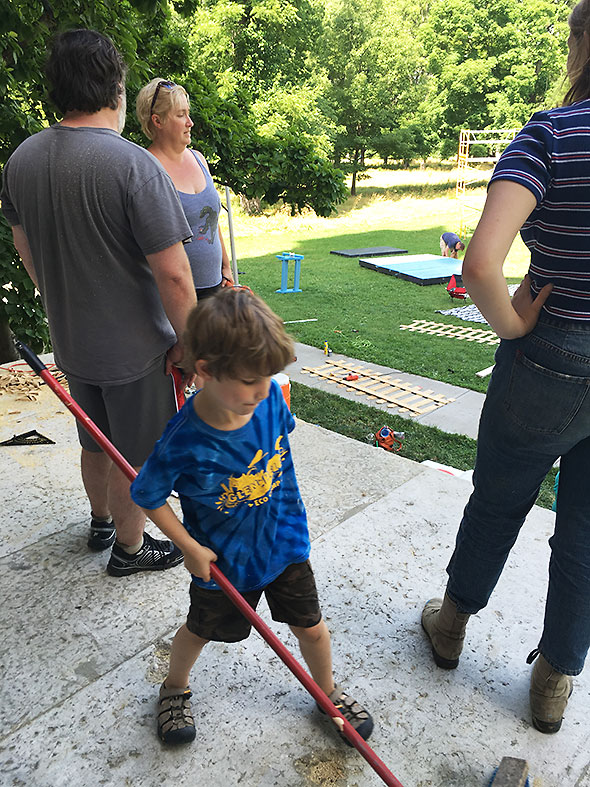 Saturday we were driving metal into wood, laying down floors, and raising the walls of our production. Sunday we’ll be back to build the play with words…raising the roof, driving the narrative at top speed, laying down our memorized lines like a rapper as rapidly, loudly, and proudly as possible. Lorrie Sparrow-Knapp, our director, told us to trust Shakespeare, to trust the ability of his words to sell the story. Don’t act around his metered syllables, she warned us, or we’d drag the narrative to a crashing halt. 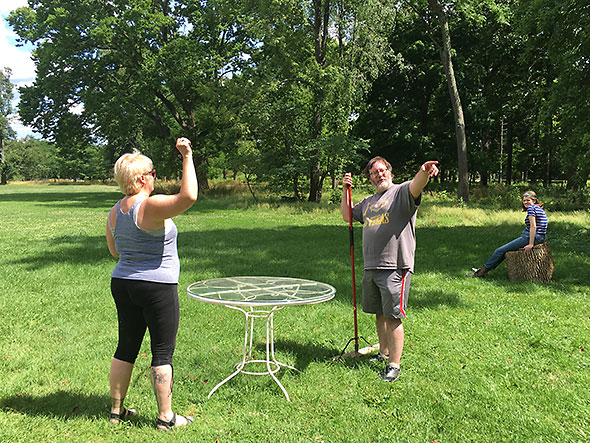 Slowing down the play’s passages seems reasonably. We might fear leaving the listener in the soup of strange language, as hero Benedict would say “so many strange dishes”. However, speak William’s words at the tempo of everyday speech and their insistent rhythm floods the scenes with life. Emotion bubble and break in natural time and it—the moment you create—feels right. Taking this note, I return to Sonnet 147 above. Whittling away the pauses and fashioning each sentence to a point, I can get to power of the poem…to its fierce, fiery heart.

Director Lorrie Sparrow-Knapp knows her Shakespeare. She’s excited, I’d even say stoked, about bringing the summer tradition back of putting on his works outdoors at the Antioch College. Arthur Lithgow started Shakespeare under the Stars here in the 1952. He set an ambitious pace in productions and within six years produced the Bard’s plays. It was an astonishing feat and one that got the attention and admiration of Queen Elizabeth. 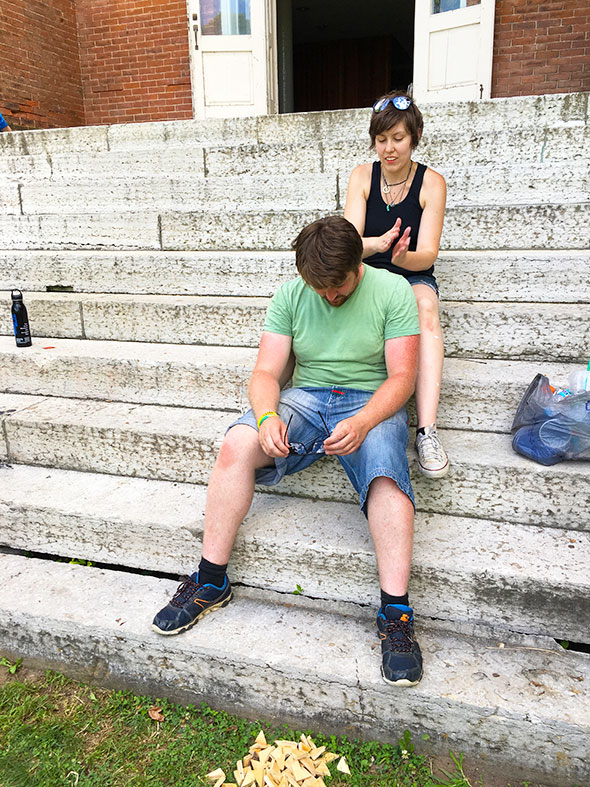 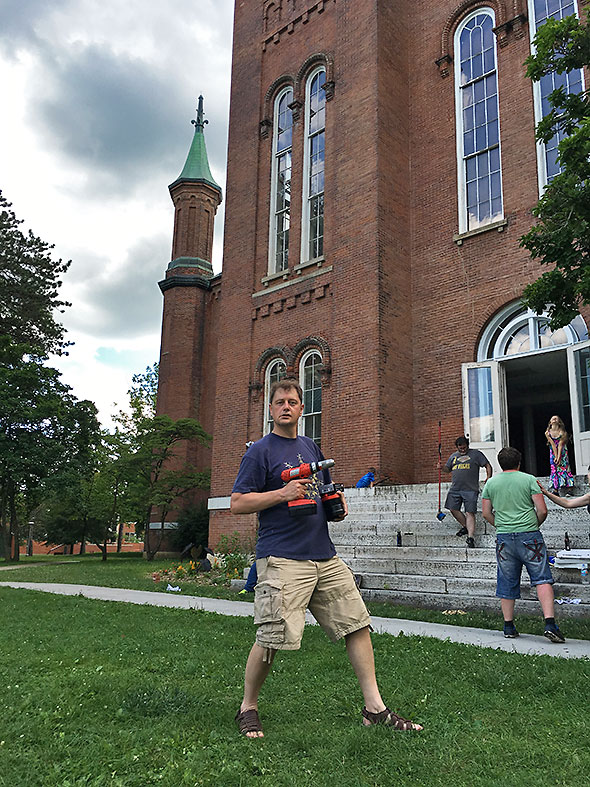 Sparrow-Knapp’s energy and ambitions are to plumb the same depths…but at time where the rules, the confides of our society are increasingly challenged. Why should Beatrice give way her place to a man? Why should Hero stand by while she is slandered and belied? Why should we be charmed by men whose games are too rough from war? Centuries separate us from William Shakespeare, but this man who came of an age of unique access to early education has much to teach us about what we’ve managed to learn in four hundred and where we’ve moved, not forward, but tangentially and only to one side. 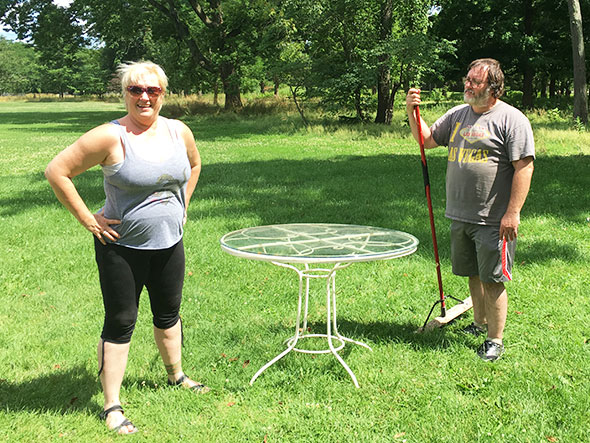 Come enjoy this fine revitalized Yellow Springs tradition and one of Shakespeare’s best comedies. We’ll be preforming on the Main Lawn of Antioch Hall at 8pm July 15-16 and July 22-23…Fridays and Saturdays this coming weekend and next. Admission is free. Bring your own lawn chair and, if need be, umbrella. We’ll be there rain or shine.