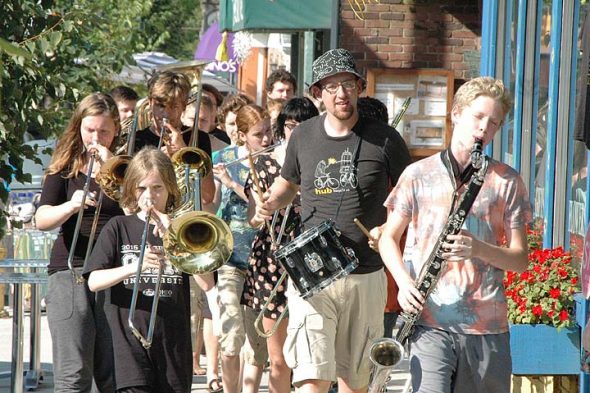 Friends Music Camp campers marched through town to promote their annual concert in 2014. This year’s concert is Saturday, July 30, at 7:30 p.m. in the Antioch College Foundry Theater. (News archive photo by Matt Minde)

A couple of busloads of young campers and adult staff from Friends Music Camp are set to arrive in town Saturday, July 30, for the camp’s annual “Musicians for Peace and Justice” concert to benefit Glen Helen. The 7:30 p.m. concert will be at the Foundry Theater on the Antioch College campus.

This year’s group of performers won’t be traveling as far as in past years, as the camp, founded in 1980 by villagers Peg Champney and the late Jean Putnam, has moved this summer from its original home at Olney Friends School in Barnesville, Ohio, about a three-hours’ drive east, to the Earlham College campus in Richmond, Ind., less than half the distance to the west.

No one knows how the change in surroundings ultimately will affect the camp experience, but everyone hopes the fundamental aspects of community and meaningful music-making will be preserved, said Champney, who remains involved in an emeritus-like role after transferring the director’s responsibilities in the past several years to longtime staff leaders Nick Hutchinson and Drea Gallaga.

The 2016 camp officially opened Sunday, July 10, with nearly 50 campers and about 18 staff members, Champney said. Champney, who is also bookkeeper for the Yellow Springs News, said that staff members had been on the Earlham campus since just after the July 4 holiday with the goal of being as prepared as possible to welcome campers to their new setting. Campers range in age from 10–18, with the youngest (10- and 11-year-olds) staying two weeks and the older youth staying a full month.

One of the highlights of the Earlham campus is the college’s new performing arts building that features state-of-the-art practice and performance spaces. Music-making by campers and staff began immediately, with the first full week concluding with auditions for the July 30 concert in Yellow Springs. Champney said that those are the only musical auditions held at Friends Music Camp, which differs from most other music camps in its otherwise noncompetitive structure.

Still, all of the full-month campers will participate in the benefit concert as members of the all-camp chorus. According to camp co-director Hutchinson, a Chicago-based pianist, the chorus will be 37-campers strong this year. Camper performances will include cello and piano solo pieces as well as a cello trio. The program also will spotlight members of the camp staff, inlcuding Martha Hyde, Rourke Papania and Minnita Daniel Cox, and the camp’s string ensembles will be this year’s featured performing groups. The concert, which became an annual tradition several years after the camp’s founding, alternates each year between highlighting the orchestral and band ensembles.

While drawing campers from across the United States and sometimes other countries, local and area residents make up a strong core of campers and staff. According to Hutchinson, local campers this year include Eliza Minde-Berman, Joseph Minde-Berman, Sophia Bottelier, Grant Crawford, Quintin Cole, Malcolm Blunt and Rhiannon Harsh-Wessendorf.

Along with the new location for camp, this year’s benefit concert will have a new setting as well. The Foundry Theater, which was the site for the camp’s scholarship benefit concert in December, is a new venue for the summer event.