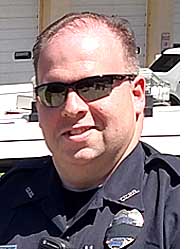 A newly hired police officer who sparked controversy in two recent village incidents by using what some saw as excessive force has been terminated from the police force.

Officer John K. Whittemore, who was hired by the department in March, was let go on Tuesday, July 5, according to a press release from Village Manager Patti Bates. Village Council President Karen Wintrow also announced the termination at Council’s regular meeting Tuesday evening.

“I thought that terminating employment was appropriate under the circumstances,” Manager Bates said in an email following the press release. Police Chief Dave Hale said on Wednesday that he had no comment, since the Village manager and not the police chief has the authority to terminate police department employees.

“Officer Whittemore was dismissed because he was not a good fit for the Village, which is why he was released under his probation, and not based on the findings of the internal investigation,” she said.

Whittemore came to the department with 16 years of policing experience, having worked most recently at the Jamestown Police Department and for eight years before that with the West Carrollton Police. However, he was terminated by West Carrollton for a pattern of not arriving to work on time.

Concerns about Whittemore’s use of force was expressed by several villagers and two Council members at Village Council’s June 6 meeting.

“These are the things making us feel unsafe in our community,” said Chrissy Cruz of the Human Relations Commission.

And according to Council member Marianne MacQueen, “We want our officers to de-escalate, rather than escalate, situations.”

In the first incident, which took place at 1 a.m. on May 28 in the parking lot behind the Gulch, Officer Whittemore smashed the car window of a longtime local resident who had refused his requests to provide identification and open the car door. The woman, who had had too much to drink and decided to not drive home, was waiting in her car for a ride home, according to an interview with the woman, who asked not to be identified. However, according to Whittemore’s report of the incident, the woman’s car keys were within her reach, which is a violation of the Ohio Revised Code if a vehicle’s owner is intoxicated. After breaking the window, Officer Whittemore forced the woman, who continued to resist, out of the car, threatened her with a Taser, handcuffed her and charged her with disorderly conduct, obstructing official business and resisting arrest.

According to the woman this week, she has pled not guilty to all three charges and the trial has yet to be scheduled.

Whenever force is involved, the department requires that a use-of-force report be completed, according to Chief Hale this week. In the recently completed use-of-force report of the May 28 incident, Yellow Springs Detective R.J. Hawley concluded that “based upon review, the use of force is within policy.” The review, which is based on Hawley having read the written reports of both Whittemore and Officer Jessica Frazier, who was also present, does not include any written analysis regarding how Hawley reached his decision.

In the second incident, Officer Whittemore stopped a 22-year-old local man as the young man was walking on Xenia Avenue near downtown at about 9:30 p.m. on May 30. According to Whittemore’s written report on the incident, the man looked “agitated” and also walked too near the police cruiser as Whittemore was parked in the Speedway parking lot. Whittemore followed the man down the street, then pulled in front of him at the Mills Park Hotel, where the man refused to stop. Whittemore reported that the man smelled like alcohol and pulled away when Whittemore grabbed his wrist, resulting in a struggle and the young man being forced to the ground. When the man continued to resist, he was threatened with Tasing, handcuffed and charged with disorderly conduct and resisting arrest. Because he was already on probation, he was required to stay in jail until his case was heard on June 20 in Xenia Municipal Court. The charge of resisting arrest was dropped and the man pled guilty to disorderly conduct.

An 18-page internal investigation of the incident, requested by Chief Hale, was performed by Yellow Springs Sergeant Josh Knapp. Knapp found that Whittemore had acted appropriately in using force to subdue the man; that there was insufficient evidence regarding whether Whittemore had probable cause to stop the man; and that Whittemore had acted improperly in not providing sufficient detail in his written report of the event. The investigation included interviews with Whittemore and with attorney Ryan Engle, although the man involved declined to be interviewed.

Regarding the use of force during the incident, the written report by Knapp notes that the man was combative once the officer grabbed him by the wrist to stop him. The man then swung at Whittemore and continued to be combative, according to the report, so that Whittemore felt physically threatened. Whittemore used arm holds, joint manipulation, a kick and the threat of a Taser before the man was subdued.

“It is acceptable that force be utilized to defend the officer’s person from physical harm,” the report concludes.

Regarding the issue of probable cause, Knapp’s report noted that Whittemore provided more details in his oral interview than he had in his written report regarding why he stopped the man on the street. Along with feeling that the man appeared “agitated,” the officer observed that he was breathing heavily, his fists were clenched and he was walking quickly. Because of this, Whittemore worried about the man’s mental state and whether there was a potential for danger to others who might encounter him, according to Knapp’s report. It seemed reasonable for Whittemore to stop the man to check on his well-being given these factors, Knapp concluded, and once he was stopped and the smell of alcohol was evident, it was reasonable to keep him detained. Once the man became combative, it was also reasonable to arrest him, the report states.

However, Knapp noted that perhaps additional case law should be consulted, so that he ultimately determined that there was inconclusive evidence regarding probable cause.