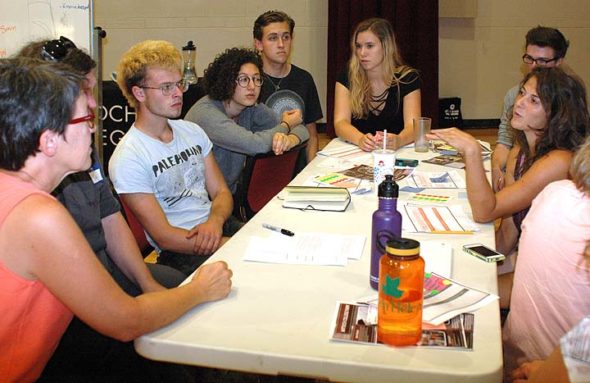 Two months ago, Antioch College President Tom Manley announced the college had received “the best news we could have gotten,” when the Higher Learning Commission granted the college accreditation after an intense five-year effort. Being accredited means the revived college now has undeniable legitimacy in the world of higher education, a legitimacy linked to easier access to both funding sources and students. But while the journey to accreditation was long and demanding, college leaders are wasting no time in placing new and bigger goals on the horizon of the revived Antioch College.

“We have an unparallelled opportunity to not only reinvent Antioch College, but also reinvent the idea of college altogether,” Manley said at last weekend’s reunion of college alumni.

Manley was referring to FACT, or the Framework for Antioch College Transition, a strategy he recently introduced to move the college forward by both enhancing Antioch’s financial sustainability and its educational offerings.

The college’s successes have been substantial since reopening in 2009, Manley said to the alumni. This fall, 230 students will be on campus, and 30 faculty will offer courses in 11 majors. The college’s co-op program has placed students at almost 1,000 sites across the nation and the world. Many buildings have been renovated on “one of the greenest campuses in the country,” he said, and the college has raised about $80 million.

“There are many victories in the past seven years to celebrate,” he said. “But the journey in front of us is still filled with challenges.”

The main challenge, Manley believes, is that the financial model used by Antioch, and by most colleges and universities, doesn’t work any more. That model calls for schools to rely on student tuition for 70 to 90 percent of their budgets, a situation linked to higher tuition costs and crushing debt for both students and their families. On average, a college graduate leaves school with $35,000 in debt, according to Manley.

“This is not a sustainable model,” he said.

The problem, according to Manley, is that currently, “We are not purposefully using these assets.”

As an example, Manley offered the Coretta Scott King Center, an “amazing gift” offered by alumna King when she allowed the school the use of her name. But while the center is beloved on campus, it is currently underused. It does not offer training, classes or conferences on social justice, inequality and diversity, issues the Coretta Scott King name brings to mind.

“Do you imagine that we could find outside support for these? I think we could.” Manley said.

If the college’s curricular assets could be leveraged to each bring in $500,000 to $1 million a year, the college would have a new sustainable revenue source, Manley said. And that financial stability would allow the college to cut costs for students, thus creating a diverse student body in line with the Antioch College traditions of inclusiveness and social justice.

An inclusive process
Manley acknowledges that he doesn’t yet know the exact outcome of FACT, as “a lot of this is still emerging.”

But he is clear that FACT involves a collaborative process aimed at identifying the best ideas for moving Antioch College forward.

“I was looking for something that didn’t foreclose on the ideas of people who have been at Antioch College longer than I have,” said Manley, who came to the college last spring, in a recent interview. “There’s always more and better ideas in the room than the ones you alone bring, and if you’re only interested in your own ideas, you won’t get the best thinking out there.”

The FACT process is a “hybrid” of various approaches to generating innovation, including some he used previously as president of the Pacific Northwest College of Art in Portland, Manley said. However, this particular approach is specifically designed with the needs of Antioch College in mind.

Manley introduced FACT to the college community in mid-August, at a week long design/build workshop. Keynote speaker for the workshop was Saul Kaplan, CEO of Business Innovation Factory, or BIF, of Providence, R.I., with whom Manley has previously collaborated.

“We’re looking at how we can appreciate all the different assets and capabilities on campus and how those capabilities might be connected in new and different ways to help re-invent the college,” Kaplan said in an interview.

The focus of the week was nine four-hour workshops, with each workshop connected to one curricular asset. Stakeholders of each asset — faculty, staff, students and community members — initially brainstormed in small groups suggestions regarding how to enhance that asset’s curriculum possibilities. Next, participants looked for patterns among the suggestions, then narrowed down the many suggestions to a few. In the last part of the process, they went deeper into the most popular suggestions, adding more possibilities. After starting out looking at each asset in terms of curricular possibilities, the groups then went through the same process with a focus on ways that asset could produce revenue. Groups then continued the process with a focus on creating new networks and developing new resources for each asset.

At the end of the week, 12 “actionable ideas” were chosen for each assest. For example, for WYSO, curricular ideas included creating an Antioch College Media Institute and increasing opportunities for student training at the station, while revenue-raising ideas included launching crowdsourcing campaigns for digital projects and sourcing grant funding for oral history programs. The ideas were displayed in Weston Hall, renamed “Solution Hall” for the event.

Several who took part said recently that they appreciated the collaborative, inclusive nature of the design/build week.

“It’s an interesting process and I think it speaks to Tom Manley’s mode of operatiion as a leader, which involves crowdsourcing, and being collaborative and creative,” said Glen Helen Director Nick Boutis, who took part in workshops for the Glen, the Antioch Farm and Antioch Village.

Regarding the participatory nature of the process, Boutis said, “I don’t remember a comparable planning process that included so many slices of people who care about the Glen,” including faculty, staff and students. “It was really enlightening for people to hear each other”

Associate Professor of Performance Louise Smith also highlighted the collaborative nature of the event as its main benefit.

“I applaud the leadership in bringing us all into the conversation,” she said, while also noting that the event’s schedule was demanding, as it took place during a regular week’s schedule of classes and meetings.

Assistant Professor of Philosophy Lewis Trelawny-Cassity came away from the design/build week excited about the curricular possibilities that may evolve from the process.

“I’m excited and optimistic about Tom’s initiative to more closely integrate Glen Helen, WYSO, the Antioch Farm and other curricular assets of the college,” he wrote in an email, noting that the effort seems “Morganesque in its vision of bringing together co-op, classroom and community in innovative ways.”

Recent joint efforts with other college teachers have brought home to him the benefits of interdisciplinary classes, Trelawny-Cassity said. For instance, WYSO jazz host Dave Barber and Kevin McGruder, assistant professor of history who has written extensively about historic Harlem, came to his class to bring their expertise to a discussion of “The Autobiography of Malcolm X.”

“The combination of music and Dave and Kevin’s interaction led to a great discussion,” he wrote.

Following the design/build workshop, the college intends to assemble all the collected ideas that emerged and keep them on its website, Manley said.
“There will always be an idea bank that will get richer and richer,” he said in a recent interview.

To move the process beyond that of just ideas, participants from each asset workshop will gather again to establish one or two priorities for the asset. After that, a Fact Implementation Team will take steps to move the priority ideas forward.

Manley is pleased with the outcome of the recent design/build week, and a recent survey of participants indicated that they felt overwhelmingly positive about the process, he said.

While FACT aims to create a new financial model for Antioch College, the strategy is also about revitalizing the college in myriad ways, according to Manley.
“The hope is to create both a stronger financial platform and a more dynamic and innovative curriculum,” he said recently.

And both the process and its products are squarely in line with the traditions of Antioch College, Manley believes.

“This is a college that has never been afraid to experiment,” he said.