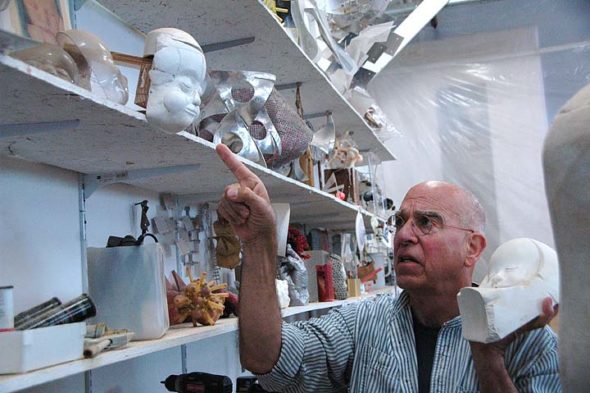 Yellow Springs resident Richard Lapedes has occupied his MillWorks studio for 12 years. He will be opening his first show on Oct. 21 at the Yellow Springs Arts Council Gallery. The show, entitled “Sculpture: Recovering from 30 years of Management,” celebrates his retirement from the corporate world but also incorporates the lessons he learned from it. (Photo by Dylan Taylor-Lehman)

When an artist announces his first show, one could reasonably assume that he is relatively early in his career, and is perhaps still honing his craft and the intentions behind it. Yellow Springs resident and sculptor Richard Lapedes is having his first show, but there is nothing of the novice about his work. In fact, that lack of any previous shows reflects part of his philosophy as an artist.

Lapedes worked as a business executive for decades and wants his art to stay free from a business-oriented mentality. The title of his show — “Sculpture: Recovering from 30 years of Management” — sums up his feelings on the matter. Nevertheless, he touts the commonalities of those seemingly distinct worlds, and acknowledges that his artistic process is influenced by what he learned in the corporate sphere.

The overlap can be seen firsthand later this month, when Lapedes’ first show in the 12 years he’s been working out of his studio in Yellow Springs opens at the YS Arts Council Community Gallery. The exhibition’s opening night will be on Oct. 21, from 6 to 9 p.m. Lapedes will give a short talk entitled “Metaphor and Materiality” at 7 p.m. The exhibition continues through Nov. 12. Gallery hours are 1–4 p.m., Wednesday through Sunday.

Lapedes makes large sculptures and occupies a substantial warehouse space near the Yellow Springs Brewery to do so. The scope of his work underscores the reasons why an artist may need a studio and not just a spare room in the house. The roughly 40-by-60-foot space is filled with well-organized shelves and tables, woodworking tools and coils of barbed wire, piles of scrap and a heated tub with 100 pounds of skin wax inside. There is a sealed room for painting and another sealed room for working with cement, a material that figures prominently in his works. Distended forms of plastic with molded faces on the end leer out from shelves like stationary ghosts.

While his current favorite materials are cement and wood (with a smattering of pieces of mirrors), his sculptures make use of many other materials, such as basalt rebar and sheets of recycled aluminum blown like foam. The materials have their own personalities, he said, and grappling with those personalities is crucial to the intentions behind his art.

On one of the shelves is a small sculpture he made more than six decades ago, when he was in middle school in Dayton, his hometown. He followed a pattern he found in an issue of Popular Mechanics and made a moving model of two boxers squaring off in a ring. Moving the weighted strings attached to the boxers’ arms makes them exchange punches. By that point he was already well on his way to being an artist, having begun making art in third grade. He did mainly two-dimensional art through graduate school, and started working in 3-D after he and wife refurbished a sailboat.

However, as is the case for many artistic spirits, the obligations of school and work reduced his time to make art. After his stint on the refurbished boat and some time in the American Virgin Islands, Lapedes and his wife returned to Dayton in 1976, whereupon he began his career as a business owner and executive. He owned and operated Lion Apparel, a Dayton-based company that manufactures uniforms for airlines and other businesses with uniform needs, and then branched into the business of protective equipment for firefighters. His stint as a businessman lasted for decades, during which he never forgot his passion for making art. He sometimes wondered about the trade-off.

“People who make art don’t have a choice — they have to make it,” he said. “But I bottled up that impulse for 30 years. I waited too long to retire. The over-monetized lifestyle is a disease for executives.”

In exhibiting his work, he needed to avoid this “disease” by allowing people to acquire his art without it feeling like a business transaction, he said. Ultimately, he decided that, instead of paying him for one of his sculptures, he’ll suggest a price to an interested buyer and that buyer will give a donation of that amount to either of his “favorite nonprofits,” the Yellow Springs schools or the Dayton Contemporary Dance Company.

“That’s how I avoid doing business,” he said.

Lapedes has been a lifelong fan of contemporary dance, an interest only furthered by his work as an artist, considering it as he does “kinetic sculpture.” And the process of his development as a multimedia artist is reflected in the local school district’s deeper learning philosophy.

Lapedes is a firm believer in project-based learning, or PBL, and as a member of the school board, was instrumental in its implementation in local schools. Superintendent Mario Basora is scheduled to give a short talk at the opening of his show.

The project-based learning philosophy mirrors Lapedes’ own growth as an artist. He learned by doing, he said, and immersing himself in whatever he could learn. There are so many commonalities between running a business and creating art: change, innovation, careful planning, he said. The difference between the two worlds is not huge, it’s just a difference in vocabulary.

Lapedes has been able to use lessons from his life in business to progress as an artist. He said he has taken the best ideas, works and metaphors and consolidated them into the approach that will characterize the next stage of his career.

“The previous 12 years has been like a period of Research and Development,” he said. “I know exactly where I’m going next.”

He indicated his piece “Book Guys Totem” as an example of the result of that research and development. The piece, which will be on display at his upcoming show, is a six-foot-high sculpture with concrete hands, five-sided varnished wood polygons and bits of mirror. The hands are those of his friends from an area book club, and the shapes and structure of the piece — almost like a geometric potted tree — is a structure that has an “obvious narrative format” that conveys the messages important to him.

The narrative capabilities of the piece and forthcoming works like it are influenced by the massive totems of the Haida people, who live on what were formally known as the Queen Charlotte Islands off the coast of western Canada. He recently took a trip to see their centuries-old technique in action, and was awed not only by the workmanship but the calculated ways in which the totems tell a story. The Haida totems are a “shorthand version of the narratives important to the people for whom the pole was built,” he said. His pieces will likewise aim to tell stories and messages important to him, though on a much smaller scale: some of the Haida totems are six feet in diameter and 60 feet tall. Raising the poles requires the work of hundreds of people pulling on ropes.

Telling a story or conveying an idea is central to Lapedes’ calling as an artist. Whether through the mix of strange shapes and words of the Book Guys Totem or the eerie grins of translucent plastic faces, the “next step” is to get the viewer to look more closely to see beyond the initial attraction of the materials.

“Making art alone is not satisfactory,” he said. “It has to have ideas, it has to express ideas that can propel us forward. Otherwise [a piece] is just materials, just a design.”

In Lapedes’ case, that story is one of rediscovering his calling and pursuing it with his lifetime of experience in art and business.

“My quest goes on; and in my seventh decade, I’ve still got years of energy to invest,” he said in an email this week. “Thus, I fully expect my work to become more sensually potent and metaphorically vivid as time goes by.”