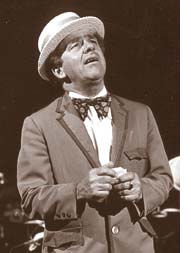 Leon Holster passed away Sept. 19, 2016. He was 95 years old. Well-known as a brilliant actor, he had a rubber face, a resonant voice — capable of a variety of non-verbal expressive noises — and a vitality that entertained and delighted his audiences and friends. A philosopher, songster and humorist at heart, in later years he regaled his friends at the daily coffee hour at the Emporium, his wife, Florence, at his side.

Leon’s parents “came over on the boat” in the early 1900s, escaping the pogroms of a violent Russia. His father was a five-foot-three teenager with a black eye when he was confronted by the immigration officers at Ellis Island. He explained the black eye: bullies had been pulling the beard of an old man and he plunged in to protect him. “That’s the kind of man we want in this country!” said the immigration officers; this family story was a formative one for Leon and later for his progeny.

Leon grew up in Brooklyn near Coney Island Beach. While still in grammar school, he organized a student strike when he discovered that the milk the school sold the students cost two cents more than milk from the store across the street. The strike was successful and the school reduced its prices.

Leon almost did not have his Bar Mitzvah. The rabbi hit his cousin and Leon hit the rabbi back. Horrors! It took considerable machinations by his family to allow him to return to his religious education.

Once as a teenager, Leon’s pals urged him to enter an open audition for “Hellzapoppin.” As he waited for his turn he saw that all the guys ahead of him did routines where they dropped their pants. When his name came up, instead of doing his own act, he stopped and said, “I do the same thing as those other guys.” The response: “Ged oudda here!”

On Dec. 7, 1941, Leon was celebrating his 21st birthday. Coming out of a lecture at Cooper Union he and his girlfriend heard the newspaper cries “The Japanese have bombed Pearl Harbor.” Later, at a surprise birthday party, an old communist seaman said, “Young man, there is going to be a war and you will be drafted and killed. You should join the Merchant Marine.” He did, though in the first year of the war, 30 percent of the merchant vessels were sunk by the Germans. By war’s end, the Merchant Marine had the highest percent of fatalities of all the services.

While in service, Leon became a radio operator. When not in immediate danger he was able to do a lot of reading. He read “War and Peace.” He took to heart Tolstoy’s belief that to obtain world peace, we must love our enemies and go back to the land.

He was in North Africa when the Allies were preparing to invade Italy. There he met an Army nurse, Katherine Philipson, a Roman Catholic farm girl and artist from Indiana whose view of the world was similarly idealistic. When she sailed off with the troops for the invasion, he thought he would never see her again.

Leon’s ship arrived at Naples within a week after its liberation. A symphony concert had been arranged, although the roof of the concert hall had a huge bombed out hole. At the concert, sitting two rows ahead of him, Leon spied that same Army nurse with an Army captain. At intermission he tapped the Army captain on the shoulder and said, “I would like to escort this lady home.”

The rest is history. Leon married Kay after the war and they had six wonderful children.

Both Leon and Kay were deeply concerned with social justice. He won a scholarship to Pendle Hill, a Quaker conference center in Pennsylvania teaching tactics of non-violent change. They worked on co-op farms in Michigan and New Jersey. They became impressed with the work of Dorothy Day who published a newspaper, “The Catholic Worker.” The Catholic Worker Movement also provided soup kitchens for the down and out and had farms that grew food for the kitchens. So Leon, with three children and one on the way, built a trailer for the washing machine and headed for a Catholic Worker farm in Missouri. Halfway through one of the long tunnels of the Pennsylvania Turnpike — two-way traffic in those days — the axle on the trailer broke and the car finally swerved to a halt at the tunnel’s end. It took a week for the repair.

There went the money, leaving not enough to buy gas all the way to Missouri. Leon drew a circle on a map and figured out how far the gas money would take them. Within that circle lay Yellow Springs where Leon had corresponded with a fellow, Roger Lorenz, who did organic farming. “Come on here,” said Roger when Leon called him. Arriving in Yellow Springs at 2 a.m., Leon stopped at the 68 Grill (now Ha Ha Pizza), open 24 hours, to get directions to the old Glen Homestead. Following behind Police Chief Russell Bradley, the family wound down Jacoby Road to the old farmhouse. Greeting them were local Quakers holding hot covered dishes.

They decided to stay. Leon milked the cow and sold the milk to the folks at the Vale. He plowed the organic garden with an old horse, built a chicken house and he and Kay took in homeless men wandering down the railroad tracks. After a while, he discovered he was not making enough money to support his family, so Leon walked down the railroad tracks to Morris Bean and got a job. It was a job “on the floor” where he knocked out the rubber tires they made from the concrete molds. Morris Bean also sent him to college to study civil engineering.

Leon and Kay were still involved in the Peace Movement. This was when the country was concerned about atmospheric testing of the atom bomb. At work Leon distributed Ban the Bomb literature. One day a man (who later turned out to be an FBI agent) visited Morris Bean. The next day Leon was fired. He had worked there for 10 years. Not long after, Yellow Springs Instrument founder Hardy Trolander offered him a job at YSI where, for the next 25 years, he worked as a production manager.

Impressed by the cultural advantages of a college town, Leon and Kay moved their family of six children to Yellow Springs. Attracted by the town’s Civil Rights “fair housing” movement, they purchased a home in the purposely-integrated neighborhood of Westgate, where Bill Hooper was constructing homes.

Leon was in his early 40s when he first got involved with theatre. In 1962 he was drafted into the chorus of an Antioch production of “Guys and Dolls,” where his exuberant Bronx cheer promoted him into a speaking role. After that there was no stopping him. He played principal and lead roles in “The Fantastiks,” “The Skin of Our Teeth, “The Inspector General,” “View from the Bridge,” “Waiting for Godot,” “The Miser,” “The Music Man,” “Lower Depths,” “The Drunkard” “Cabaret,” “Three Penny Opera” and many more; Florence appeared in many of the plays alongside Leon. Perhaps his magnus opus was “Fiddler on the Roof.” He directed the show and memorably roused the audience with his intuitive and fun portrayal of Tevye. It seemed as though half the children of Yellow Springs auditioned for that play. He cast them all. When he was a child his bed was the living room couch, and he remembered Friday nights when the relatives came over to play pinochle. Their arguing in the kitchen was like a lullaby to Leon. So in “Fiddler,” when the wedding scene turns into a big noisy fight, he had the children all slowly fall asleep.

A celebration of Leon’s life is planned for Saturday, Dec. 10, at 4 p.m. in the Glen Helen Building.