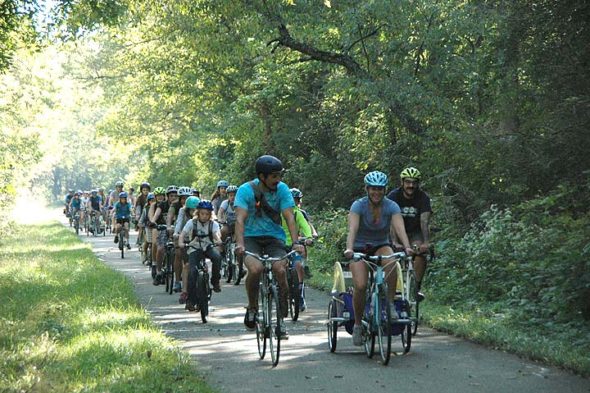 McKinney Middle School students and staff led groups of students on a 53-mile bike ride last week as part of the “Into the Wild” immersive learning field trip. Students biked, canoed and camped their way from Yellow Springs to Loveland, learning about the Little Miami watershed and the Underground Railroad in the process. (Photos by Dylan Taylor-Lehman)

McKinney students go ‘Into the Wild’ to bike, learn, bond

Last week, approximately 65 students left the hallowed halls of McKinney Middle School for the interactive classroom of the Little Miami bike trail and the Miami River watershed. Their excited whoops and yells could be heard from Yellow Springs to Loveland as the students biked 53 miles over three days as part of “Into the Wild,” a project-based learning (PBL) excursion.

The project was designed to provide students with cross-disciplinary learning opportunities outside of the classroom. The trip included lessons in science, social studies, math and language arts, in addition to providing the students ample time to bike, canoe and camp. Back at McKinney, students are participating in one of six projects that build on the experiences of the trip.

“This is what project-based learning is all about,” said Yellow Springs Superintendent Mario Basora in a press release about the trip. “Creating authentic opportunities for student learning, igniting a passion in our students, staff and community, and giving our kids the opportunity to develop skills like teamwork and communication through their work.”

The students dove headfirst into the trip. The group left on Wednesday, Sept. 21, biking 35 miles to Morgan’s Riverside Campground in Morrow. The group stopped every few miles for a lesson, learning about the former settlements along the way, for example, and those settlements’ contribution to the Underground Railroad. Once at the campsite, students were given time to relax before preparing meals for the group. PE/Health teacher and trip co-organizer Kate Lohmeyer marveled that they had enough energy to play tag and volleyball after the significant mileage of the day’s journey. The following day the students took a six-mile canoe trip up and down the Miami River, at one point disembarking to take water samples and collect macroinvertebrates for a science lesson. The students prepared dinner again that evening, and breakfast the next morning. The menu reflected the culinary tastes of middle-schoolers: grilled cheese, hamburgers, pancakes.

“We had sandwiches every day,” said student Connor Raymer. “But they were good sandwiches.”

Preparations for the trip began last school year. McKinney teachers began brainstorming projects in which they could integrate a number of lessons, and initially decided on a backpacking trip. However, a bike trip seemed a little more feasible and a little less strenuous for the students, Lohmeyer said, and so the teachers began planning accordingly. Different teachers tackled different logistical concerns and developed lessons specific to the trip.

A letter was sent to parents at the end of the year outlining the plans for the trip and suggesting that parents get their kids a bike over the summer. A survey was conducted that asked students and parents about aspects of the trip that worried them. Many people responded with concerns about popping tires and bike accidents, and the team tried to plan accordingly. Lohmeyer and co-organizers science teacher Becca Eastman and PBL Foundations teacher Jack Hatert rode the trail earlier this year and checked out potential campsites. Math teacher Jeff Collins had a trial run in meal planning over the summer at a church camp.

Seventh-graders began projects related to the trip as soon as the school year started. Lohmeyer’s science class began studying the water cycle, while Jaime Adoff’s English class read a novel that takes place on the Little Miami bike trail. Collins’ math class planned the meals, figured out proportions and had to purchase all the supplies under a strict budget.

Out in the field, students got a lesson in earth science by testing water quality and pH levels of the river. In fact, one of the favorite projects was the macroinvertebrate study, the second part of the water project, in which students kicked up silt and rocks and netted the creatures turned over in the process. Staff from YSI and the Ohio Department of Natural Resources helped guide the lesson. Student Rosemary Burmester said that the presence of animals (and what kind of animals) can say a lot about the quality of the water.

“We did a turbidity test that showed we could see up to 29 inches below the surface of the water,” Burmester said.

This reporter was imbedded with the educational caravan on Friday, Sept. 23, the last day of the trip, in which the students undertook the final 16-mile ride from Morrow to Loveland. A group of parents and social studies teacher Brian Knostman drove to the campground each morning to link up with the students and to deliver the teachers and chaperones some much-needed coffee. The parents also acted as support staff for the three days, meeting the students every few miles to check in with the group and provide water or transportation if necessary. A nurse and doctor also checked in on these stops, and two bike mechanics rode the whole way with the group.

Pulling into the campground, the grassy yard full of dozens of bikes looked like the scene of a children’s biker rally. There was a healthy bustle as students finished up their breakfast under the campground’s pergola. They’d already packed their supplies and dismantled the campsite for a 9 a.m. disembarkation. The students left in staggered groups to minimize the risk of tire-to-tire contact among groups following one another.

“Oh my goodness, I don’t want to leave this place,” one student was overheard saying. “Just kidding, yes, I do — let’s get going!”

That student’s excitement was reflective of the spirits of most of the students. They were ready without much herding and knew the routine of getting on their bikes into a single-file line with their groups. Being out and about with their friends inspired a certain giddiness, which resulted in one group of students singing Christmas carols and a couple rounds of “Happy Birthday.”

There were no lessons on the road that day, just a steady cruise to Loveland. The group stopped a little over halfway in Kings Mill, under the gaze of an enormous abandoned factory next to the bike path. The group resumed biking after a quick snack of Pop-Tarts and rode the rest of the way to Loveland, where a number of parents cheered their arrival at the end of the path. Students regaled their parents with highlights of the trip as they ate lunch together in a park.

“The trip was unbelievable,” said parent Al Ganley, whose daughter Abby took part. “I told people I worked with about ‘Into the Wild’ and they are so envious that their kids don’t get to do this.”

Upon their return to school this week, students began their follow-up projects. They were given six choices of projects to work on and ranked them according to their preference. Students could pick from preparing a water quality report, writing a piece of historical fiction based on history of the area, building a low ropes course, creating a bike wheel sculpture, constructing a traveling museum exhibit (which will be featured in the train station in Yellow Springs and will feature QR codes linking to YouTube videos), or putting together a documentary about the trip.

Although students Raymer and Burmester greatly enjoyed the science lessons on the trip, they’ll both be writing fictional works  as their project. Raymer said he learned a lot about the Underground Railroad, which may factor into his tome while Burmester is wondering how to combine her interest in indigenous cultures with the bike path and the 1960s.

“But I already have character names brainstormed,” she said.

The trip presented the opportunity for a few firsts. It was Camryn Strolger’s first bike trip, first time sleeping under a tarp and first time canoeing, which she said she preferred to biking because she got to swim afterwards. Her follow-up project is the documentary, and so part of her trip involved filming the ride itself and the goings-on of students at the campsite.

Burmester said that she liked preparing the meals because she has an interest in cooking, and that she appreciated being able to cook with the teachers.

Fortunately for everyone, there were no real calamities. There were one or two minor bike accidents, an asthma incident and a slight disciplinary episode involving boys who sneaked out of their tents to hide and scare their classmates. One student reportedly slept on top of a picnic table so as to not get earwigs in his ear, and two other students missed shower time because they were playing in the river. There were some “chafing issues” among the boys, as most (if not all) students had never taken a bike trip of this magnitude.

But Lohmeyer and Eastman reported that student conduct was exemplary, and that everyone was happy to complete their assigned tasks and help each other out when they could.

“Students were fantastic with one another,” Eastman said. “They exceeded my expectations.”

The students were even eager to help unload the bikes when they were brought back to the school following the trip.

Overall, the teachers deemed “Into the Wild” a success. The days leading up to the trip were pretty stressful, Lohmeyer said, but she had a feeling it would work out.

“It was by far the most alive I’ve seen the students,” Eastman said.

The teachers are already dissecting the trip to see what worked and what they can do better for next year’s trip, as Lohmeyer and Eastman both mentioned they hoped it will become an annual event.

“I hope this is the first of a long-standing tradition,” Lohmeyer said. “It couldn’t have been more meaningful to me as an educator.”

Considering three days’ worth of physical activity, meal preparation and on-the-go schooling, and the fact that their daughters couldn’t sleep the night before they left, Knostman and another parent said they expected some exhausted kids.

“We’re going to have a quiet weekend,” Knostman said.