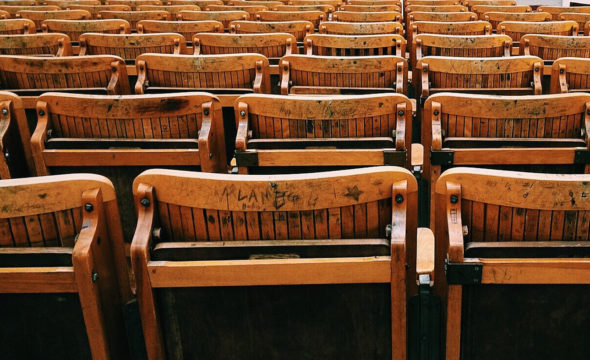 Antioch College will hold a post-election teach-in on Friday, Dec. 2, to address concerns that have arisen since the Nov. 8 presidential election.

After a presidential election that has left many Americans feeling bewildered, angry and afraid, Antioch College is rallying to try and bolster community psyche and keep citizens informed. The college will host a post-election teach-in on Friday, Dec. 2, 2–9 p.m., at the Foundry Theater.

The teach-in was organized by the college’s faculty, and will feature sessions that discuss topics like the Electoral College, activism and ways to intervene when marginalized people are threatened, and more. The sessions will be facilitated by students and community members as well as faculty, with each session comprised of both lecture and attendant participation.

Antioch College faculty member Corine Tachtiris said via email this week that everyone responds to crisis according to their own experiences and talents, and that the college’s faculty responded to the community’s post-election feelings with the desire to teach.

“But we also see the event as more collective,” she said. “Teach-ins began during the Vietnam War, and while they happened on university campuses, they also happened outside of the classroom. Teach-ins are collaborative, they emphasize active participation and the breaking down of hierarchies as everyone learns from each other and moves toward a common goal.”

In order to decide what to discuss at the teach-in, the college held a community meeting that included all students, faculty and staff. The meeting invited those in attendance to share their post-election concerns and what they felt they needed to address these concerns. The input from the community meeting became the outline for the teach-in, with the concerns that seemed most pressing and extensive slated for discussion at this weekend’s teach-in; further teach-ins will be held in upcoming months to address some of the topics raised at the meeting that won’t be covered on Friday.

Tachtiris said that while the educational aspect of the teach-in is important, the event also presents a restorative opportunity for participants to connect with one another.

“One thing many people talked about during planning input sessions was the need to build solidarity, especially across divisions,” said Tachtiris. “We welcome everyone to the teach-in, no matter their political views.”

Tachtiris said she also sees the event as a chance for those who have been shaken by the current political and social climate to not only heal, but to look forward with a little less grief than before.

“One thing I hope participants walk away with after the event is hope itself,” said Tachtiris. “The morning after the election I felt shocked, powerless and frightened. I also felt worried about our students and the toll these same feelings could take on them. The situation we are facing may seem overwhelming, so we wanted to give people a sense of empowerment about what we can do to move forward and take action to protect the people and values we cherish.”

The teach-in is free and open to the public, and no registration is required. All sessions will be held in the Foundry Theater, and the schedule, which is subject to change, is as follows:

For more information about the teach-in, contact Tachtiris at ctachtiris@antiochcollege.edu.

One Response to “Antioch College to hold post-election teach-in”