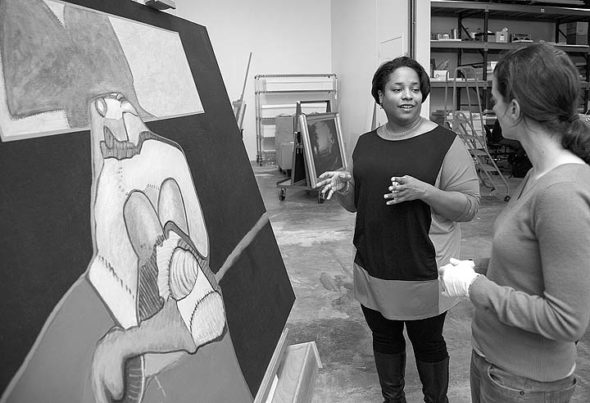 Smithsonian Institution.
Tuliza Fleming, a YS High School graduate, is the curator of art for the Smithsonian’s recently opened National Museum of African American History and Culture in Washington, D.C. Named to the position in 2007, she was tasked with creating the then yet-to-be-built museum’s permanent art collection. She’s shown here in 2014. (Submitted photo by Michael R. Barnes)

The opening of the Smithsonian’s new National Museum of African American History and Culture on the National Mall in September followed more than a century of efforts to recognize formally in our nation’s Capital the contributions of black Americans in the making, building, growth and life of this country.

Immersed in that endeavor for the past nine years has been Yellow Springs High School graduate Tuliza Fleming, the elder daughter of villagers John E. and Barbara Fleming.

Fleming, 43, is the museum’s curator of art — a prestigious, exciting and ground-breaking position.

In speaking with Fleming about her work with the museum, you hear that her responsibilities there bring together personal and career aspirations in profoundly rewarding ways, not least of which has been the public’s reaction to the museum’s opening. “The response has been “awe-inspiring,” she said in a recent phone interview from her home just outside Washington, D.C. Because of the overwhelming interest, museum visitors need to reserve tickets in advance, though admission is free. Eagerness to visit is reflected in the fact that reservations are full into March 2017, she noted.

Fleming, who was born in Washington, D.C., while her parents were in graduate school at Howard University, and then spent her first seven years in the city, said she “had always hoped to come back at some time.” With her father’s career as a museum professional, she grew up in museums — first visiting the many institutions of D.C. and then facilities in Ohio, where the family moved when her father became founding director of the African American Museum and Cultural Center in Wilberforce. Because that then-unbuilt facility is under the auspices of the Columbus-based Ohio Historical Society, the family started out living in the state capital. They moved to Yellow Springs as Tuliza was entering her junior year in high school.

When she set off for Spelman College in Atlanta two years later, she wasn’t planning on going into museum work. Her interest was art. But in that study she became keenly aware of the scarcity, even absence, of work by artists of color in the permanent collections of major institutions. She said she asked one of her professors why that was, and was told that decisions about  who was included were made by a curator. “Maybe I’ll be a curator and change that,” she recalled thinking.

She went on to the University of Maryland, College Park for her graduate work, inspired by a talk at Spelman by artist David Driskell, who was a faculty member and department chair at UM. “He was so impressive. He was an artist, art historian, speaker, writer. … I wanted to be just like him.”

Driskell “took me under his wing,” Fleming said, adding that the two remain close. “He’s like a second father,” she said.

Throughout her education, she secured a variety of internships at art galleries and museums, including the Smithsonian’s National Portrait Gallery. One of her assignments at the Portrait Gallery was to research the Harmon Foundation’s work to collect and exhibit African-American art in the early and mid-20th century. She found the collection so interesting that she made it the focus of her master’s thesis, and she recommended to the Portrait Gallery staff that the collection could be the source for a worthwhile future exhibition.

Not much later, she got a call from the gallery. A planned exhibition had fallen through, would she be interested in curating a show based on her suggestion? “I would be guest curator,” she said, “not an intern.” The exhibition, “Breaking Racial Barriers, African Americans in the Harmon Foundation Collection,” was on display throughout 1997. “I was about 23. It really opened doors for me,” she said.

She thinks that experience was probably what got her on staff at the Dayton Art Institute in 2001. The Dayton-area arts community fondly remembers Fleming’s nearly five-year tenure as the associate curator and department head of American art at the DAI.

Fleming said she had moved back home “to study for her orals rent free.” She had finished her graduate coursework, and writing her dissertation would be the next step after passing her oral exams. As a Ph.D. candidate, she went to the DAI thinking that the museum might have some kind of research work available. When she made her inquiry at the front desk, however, she was told there was an opening in the cafeteria. She said she went home and contacted the human relations department directly by phone and learned of the associate curator’s position. She said she didn’t realize until later that “the associate curator was THE curator” for American art.

She also learned that she was “at the time the only curator of American art who was black.”

She said all-in-all she enjoyed her time at the DAI, and still appreciates the quality of the museum’s collection, especially considering Dayton’s moderate size. She left in 2006 in order to focus on completing her dissertation, she said. A year later, she had her Ph.D. in hand, as well as her position with the National Museum of African American History and Culture.

She said her father’s vast museum experience, which in addition to the museum in Wilberforce has included the directorship of the Underground Railroad and Freedom Center in Cincinnati, has been “invaluable” throughout her career. “He’s not an art historian or art person, but just talking” with him is helpful, she said. “Just like having a colleague or friend who understands what you’re talking about.” He also had the experience of developing and opening new museums, which Fleming noted is a very different experience from joining a staff at an existing institution.

Working with Chief Curator Jacqueline Serwer, Fleming had the task of building an entire art collection for the new museum — from scratch. “When I came in in 2007, we had like one painting and one print, and we were asked to put together a comprehensive art collection.” The budget was tight. “We didn’t have a lot of money,” she said. “We started with $1 million to $1.2 million for the whole museum.”

“I came up with a wish list — all the stars,” she said. Then, “I had to quickly establish a network of donors.” Because “the vast majority [of work] would come through donations,” Fleming said she was faced with the challenge of “how to move people” to give to a museum that hadn’t even been built.

Another challenge was in finding the collectors. Many “were very much under the radar” of mainstream institutions and typical art collector circles. The art she was interested in finding was hanging on the walls of people’s homes, hung there “because they loved it.”

She said she ended up meeting people across the country — one person giving her the name of another — and going into their homes to talk about their personal collections and the museum. Fleming said she was moved by the response. “People were very generous,” she said. “They thought it was very important that they support this endeavor.”

Sometimes potential donors would call her, particularly family members of artists who hoped to find a suitable and receptive home for their loved one’s work.

One of those calls came from the niece of Meta Vaux Warrick Fuller, a sculptor, painter and poet who had been a protege of August Rodin and is considered a forerunner of the Harlem Renaissance. The niece inherited Fuller’s body of work after the artist’s death in 1968. “Scholars didn’t even know” all that was there, including Fuller’s sculpture Ethiopia, which now “is one of our prize pieces,” Fleming said.

“Jackie and I were dancing up and down the hallways” after that call, she said.

The collection now stands at about 150 pieces, with about 85 currently on display. The museum’s entire fourth floor is dedicated to the fine art gallery, with works spanning the history of American art. Included are two paintings by 19th century artist Robert Duncanson, who spent significant time in Cincinnati and Mount Pleasant, Ohio, and famously made a painting of the Little Miami River’s “Blue Hole” in present day John Bryan State Park.

For Fleming, it was important that the collection be about the art work first and foremost, as opposed to an historical narrative featuring works of art. All the artists are people of color, but “race would only be discussed when important to understanding the work of art,” she said. The historical and social context of each work is then explored through that lens.

Contemporary artist David Driskell’s 1956 painting “Behold Thy Son,” a modern-day pietà completed the year after the murder of Emmett Till, is a particularly significant museum acquisition for Fleming, as it represents the artistic expression of an important American artist who is also responding to the world in which he lives. “It’s a sad painting, but it shows a historical moment in American history and it shows how artists reacted to it.”

The results of Fleming’s and her co-workers’ efforts are earning wide praise. The New Yorker recently called the fourth-floor gallery of fine art “[t]he triumph of the building’s interior” and the art collection “a genuine treasure.”

For Fleming, the gallery forms a piece of the museum’s whole in fulfilling its mission, which fundamentally “revolves around the black experience in America,” she said. “We want to show all sides of the experience.”

“Whiteness is a default in America,” the fact of which creates problems of inclusion and recognition for those who aren’t part of the default group, she said. Visit any art museum, and the work of white artists won’t be designated as such, while the work by black artists will most always indicate the artist’s race. “They’re always seen as a black person first.” That’s when they’re included at all. For the most part, black artists have been historically ignored and excluded by the white-defined canon, she said.

Fleming said she is moved by “how long people waited for this museum to arrive.” And she is “very happy” to be in a position to share a more complete picture of American artistic life and expression.

“This county has been built on our labor,” she said, and the Smithsonian’s new museum “affirms” the African-American presence and contribution.