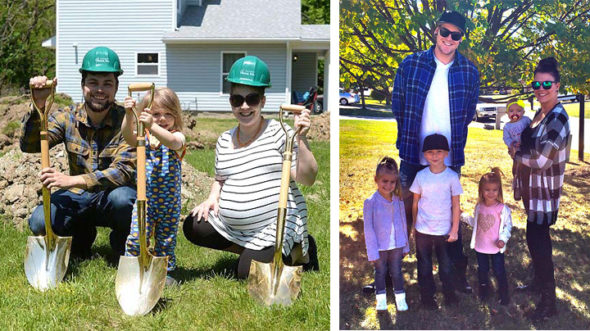 Two young families are moving to Yellow Springs, thanks to local land trust nonprofit Home, Inc. The Hange and Schaade families will complete the four-unit neighborhood on Cemetery Street, a collaboration between Home, Inc. and the Village of Yellow Springs. Pictured are Patrick and Brandy Hange, pregnant with Nico June, now 5 months, and Nolan, now 3, in front of their new home during an earlier phase of construction. Also pictured in a family photo are Matthew and Elizabeth Schaade with children Rowyn, 4; Gavin, 6; Marley, 3; and Vaeda, 1. An open house for the two families and their new homes will be held Friday, Oct. 28, from 4:30 to 6:30 p.m., at 134 and 136 Cemetery St. (Submitted Photos courtesy of Home, Inc.)

When he was growing up in Huber Heights, Matthew Schaade often visited Yellow Springs with his parents. The family came to the village to hike in Glen Helen, or just walk around downtown. Schaade’s memories of those times are good ones.

“It always seemed like a magical place,” he said recently of Yellow Springs.

Now at age 29, Schaade, a graphic designer, and his wife, Elizabeth, a stay-at-home mom, are thrilled to be joining the Yellow Springs community. With their four children — Gavin, 6; Rowyn, 4; Marley, 3; and Vaeda,1 — the couple will move to the village this weekend, to live in one of the four homes built by Home, Inc. on Cemetery Street. The move culminates their search for the right place to raise their children, a place that embraces their own “forward-thinking” values, has a sense of community, celebrates the arts and offers good schools. After worrying that they might have to move to Oregon to find those attributes in a town, the Schaades realized they could stay closer to their big Ohio extended family if they instead settled in Yellow Springs.

“This is definitely a dream come true for us,” Schaade said.

Patrick and Brandy Hange were also looking for the right town in which to raise their children, 3-year-old Nolan and Nico June, five months. Having both grown up in the Cincinnati area, they lived in Westchester on the north side of the city until Patrick joined the Air Force. For the next four years, they were stationed in England and found they loved life in their small village, where they could walk everywhere and everyone knew everyone else.

“It felt like home,” Brandy Hange said in an interview last week.

After Patrick, who now works for Costco, left the Air Force and the family returned to the States, they were surprised to find that the Cincinnati area no longer felt like home. Rather, it felt too big and anonymous, and they needed a car to go anyplace. No place felt right until they visited Yellow Springs, according to Brandy, a stay-at-home mom.

When they came to Yellow Springs for the day, “it felt so sad when it was time to leave,” she said.

So Brandy became determined to find a place to live in the village. But the Hanges ran into the same obstacles that the Schaades encountered — the homes for sale in Yellow Springs were way outside their budget, and available rentals were neither affordable nor desirable.

But looking online, both families discovered Home, Inc., the local land trust nonprofit, and wondered if Home, Inc. could help them. And each couple ended up working with Home, Inc. Program Manager Chris Hall to become eligible for an affordable home.

“We couldn’t have worked with better people, giving us the information and tools we needed,” Matthew Schaade said.

And the work paid off. This Friday, the community is invited to an open house to celebrate the completion of the two houses that will soon become the homes for the Schaade and Hange families.

The event celebrates not just the completion of the last two homes, but the culmination of the Cemetery Street project, the first collaborative partnership between Home, Inc. and the Village of Yellow Springs.

“This project is symbolic of the Village’s commitment to income diversity and inclusiveness,” Home, Inc. Executive Director Emily Seibel said last week. “I think it’s an important and historic first.”

The four-home Cemetery Street project, six years in the making, has provided new homes for four families, or 20 individuals, including 11 children. Besides the Schaade and Hange families, the homeowners are the Wyatt family and the McCowan/Benning family. Before moving into their new homes a year ago, both families were renting in town, and Julie McCowan had worked for 27 years as a nurse’s aide at Friends Care Community.

Now that the Cemetery Street project is complete, Seibel is especially excited that it met the nonprofit’s goal of providing homes for both those who currently rent in the village but want to own a home, and those who want to move into Yellow Springs.

“It’s a mix of new families coming in and existing residents,” she said.

Helping to make Yellow Springs more affordable was the main objective of Council members Judith Hempfling and Lori Askeland in 2010 when they proposed the Cemetery Street project to Village Council. While the Village has in the past given financial breaks to Home, Inc’s projects, this was the first time that the Village and Home, Inc. partnered on a project.

Addressing the need for affordable housing had also emerged as a community goal during the 2010 villagewide visioning project.

“Locally, there’s a strong sense in the community that government should do our part,” Hempfling said, emphasizing that the land trust model used by Home, Inc. ensures that not only are the homes affordable for the first buyers, but they remain affordable in future transactions.

Affordability is also enhanced by the energy efficient nature of the homes, according to Seibel, who said they are expected to use about half the energy of a conventional home.

Council sold the Village-owned .7 acres on Cemetery Street to Home, Inc. for half price, a savings to the nonprofit of about $85,000, and also upgraded water lines, a move that benefitted the whole Cemetery Street neighborhood.

And while those actions represent an initial Village financial investment, local government and schools are reaping many financial rewards from the Cemetery Street project, according to Seibel.

All together, the four homeowner families will pay more than $10,000 yearly in property taxes, which benefit both local schools and Village government. A number of construction-related jobs were created during the project (developer People’s Homes LLC, which won the project with the lowest bid, employed many subcontractors) and overall the four new homes add about $750,000 in local infrastructure development, Seibel said. The project included $260,000 in grants that covered the gap between the affordable sales price and the cost of development. Providing the grants were Huntington National Bank, Bike and Build Inc., the Ohio Community Development Finance Fund, the Vectren Foundation, the Dayton Foundation, the Morgan Family Foundation and the Federal Home Loan Bank of Cincinnati.

“The project not only meets the public goal of being a welcoming community, but has economic benefits to Yellow Springs,” Seibel said.

The year 2016 has been significant for Home, Inc. in many ways. Not only is the Cemetery Street project winding up, but the nonprofit also completed its 20th affordable home since its inception in 1999. When the Cemetery Street homes are complete, the number goes up to 22 homes. The community now reaps about $60,000 yearly in property taxes from all the Home, Inc. development, Seibel said.

And having addressed the need for affordable homes to buy in Yellow Springs, Home, Inc is turning in a different direction. After a feasibility study indicated that the village needs both affordable homes for sale and affordable rentals, the nonprofit will focus its attention toward rentals.

Two different sites on Dayton Street have been identified as the future location of up to six rental apartments geared toward seniors. The organization is also in the early stages of creating a pocket neighborhood with 10 to 14 units of modest-size cottage housing that emphasize community interaction in a yet-to-be-named location. The upfront costs for building rentals are higher than for constructing homes for sale, so the organization is building its capacity for these new projects, according to Seibel.

In its almost 18 years working to make Yellow Springs more affordable, Home, Inc. has enjoyed significant community support, both in donations and volunteer labor. Over the years, hundreds of volunteers have donated their time painting, landscaping and installing insulation in Home, Inc. homes, which brings down the cost of the home to the homebuyers.

“It feels like the whole community becomes a part of the project,” Seibel said. “It’s lovely to see the community come together to do something so positive and welcoming.”