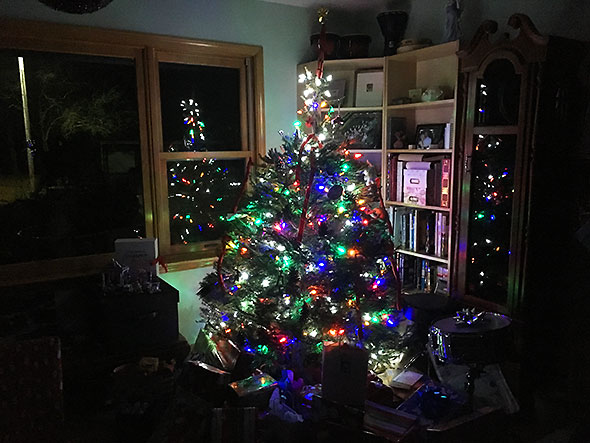 My husband was elated recently to find the Peanut Christmas special available for download. We gathered in the master bedroom and all heaped onto the queen sized bed to watch the cartoon. All five of us. The kids tucked in between Jeremy and me. Bellatrix perched herself between the kids and the laptop at our feet. Huddled there, we watched Charles Schultz’s 1965 classic A Charlie Brown Christmas.

Why I hadn’t realized the television show was a year older than me? Seems like it’s always been there and, for me, it has. The tradition of gathering around the television and commiserating with Charlie Brown and Linus has been going on for 51 years now. It must have been a moment for people—my parents, for example—to hear a young able-bodied man admit on air that the Christmas season can be a little hard to take.

My favorite day is Christmas Eve Eve. It’s a day of anticipation but restrained obligation. It’s like the moments between Santa Claus’s arrival and when the parents wake up. A time that brims with hope and endless possibilities.

I remember Christmas mornings and the bubbling intensity I felt in my tummy. I could barely handle the frenetic chaos of unwrapping packages so I was pleased with my parents’ tempered morning ritual. We could open our stockings and perhaps one present before leaving for the McCoy family breakfast. The day started early, every ritual taken at a pace and unfolding slowly through many gates. The joy of gifts soon turned into the joy of giving as I devised ways to spread cheer among my family. Giving was a pleasing way to take control—to assert order into the threatening chaos of receiving—and to serve the best instincts that our holidays distill. Now, I’m moving through this well-traveled space with my children wondering how they will take to the glittering traditions of the season and what they will take from them.

My daughter surprised us over a year ago by asserting her intention to audition for the Dayton Ballet Nutcracker. It was October. We were astonished by her forethought as much as her initiative. My husband looked into auditions and had to break the news to our daughter: We missed the dates already. Auditions for the 2015 cast had passed just two weeks earlier. As Jeremy comforted her, I formed a plan: We’d sign up for the Dayton Ballet school’s summer intensive and audition the following fall. In the meantime, we’d invest in season passes to the Dayton Ballet for the whole family.

I may have formulated this plan, but Jeremy executed it. He contacted the school and set our daughter up for the summer intensive. He took our daughter to the intensive every day. He made sure she got there on time and in the proper attire. He drove both children to the audition, our daughter auditioning with the preteens and our six year old son trying out among youngest applicants. A week later we received two thin letters from the Dayton Ballet. The first offered my daughter a role; the second offered our son condolences and encouragement to try out again next year. We gave both children deep hugs; then my husband drew a deep breath and dove into the rehearsal schedule with our daughter. We learned she would be an attendant which means that she’d be on stage during the dance of the sugar plum fairy. Then we learned she’d carry the banner of the arabian dance…only my favorite of the special treats that delight in the Nutcracker’s second-act journey through candyland. As the holiday season got underway in mid November, Nutcracker rehearsals filled our weekends. They grew to intensity in the middle weeks of December until her performances last week.

My son and I looked on with great interest and a little envy as father and daughter prepped, planned, and performed. I’m a little gobstopped…the opportunity to perform with a professional company, to witness the inner workings of a highly choreographed production are frankly things I’ve dreamed of fervently but unattainably. Here are my husband and our nine year daughter making it happen.

There’s a song I used to sing in church…a favorite of the children’s choir. “It only takes a spark to get a fire going. And soon all those around can warm up in its glowing.” That how it is with love—love of family, love of heritage, love of God—we want to pass it on. My love of dance is a spark, a small intense flame. My family is the tinder. It warms my heart to see them, all three, aflame.