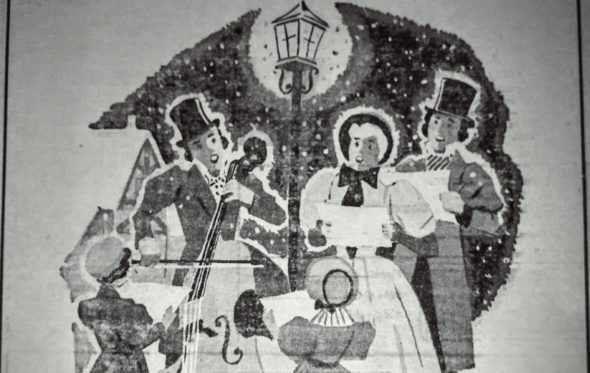 A 60-year-old holiday tradition will make its return this Sunday: the village’s community carol sing, which has been dormant for the last few years, will be held at 3 p.m. on Dec. 18, in the lobby of the Mills Park Hotel.

Ruth Bent is one of a handful of villagers who remember the history of the carol sing and how it began six decades ago. Bent said that her next door neighbor, the late Joan Brucker, first hatched the idea of a carol sing. “[She] decided that this would be a good, fun thing to have in the village,” said Bent.

The YS News reported that the very first carol sing was held Sunday, Dec. 23, 1956, in the elementary school auditorium, and lasted “only an hour, so that children [could] make their bedtime.” With Brucker at the helm, the event was sponsored by the now-defunct Community Council, which helped fund nonprofit events in the village. Walter Anderson, who was chairman of the Antioch College music department, led the singing that year, and for many years after. Jean Putnam, well-known local musician and co-founder of Friends Music Camp, provided the piano accompaniment at the first carol sing. Carol books were assembled by several village volunteers who were named in the YS News as: “Mrs. Robert Woodruff, Mrs. Gordon Cowperthwaite, Mrs. Thomas Brown, Miss Bessie Totten and Mrs. Roger Brucker.”

Hundreds of cookies were baked for the first event — 500 to be exact — and carols were sung by candlelight. Bent said the event became a highly anticipated one for families over the years.

Children were warmly welcomed to the event; as the YS News stated: “Parents are especially invited to bring their children, if the children can stay in their seats, Mrs. Brucker said. She pointed out that this safety measure will be necessary on account of the candles.”

After several decades of popularity, however, the event “kind of dwindled, the way things often do,” said Bent.

The carol sing has dropped off the radar in recent years; it was last held at the Senior Center in 2013. It’s been organized by a rota of different village volunteers over the years, but as folks have moved out of town, passed the torch or passed away, the event has fallen out of public knowledge. Bent speculated that the decline perhaps can be attributed to shifting cultural tides.

Hoping to reinvigorate this storied tradition, the YS United Methodist Church has organized this year’s carol sing. YSUMC Pastor Rick Jones stressed that, though the church has taken the reins this year, the carol sing is not a “church-sponsored” event.

“This is a revitalization of that original, traditional event,” said Jones. “It’s a Yellow Springs tradition that shouldn’t die on the vine. We’d like to make certain it continues.”

When Jones approached Libby and Jim Hammond, congregants and owners of the Mills Park Hotel, about hosting the event at the hotel, he said there was “no hesitation” in agreeing to the use of the space.

“They thought it was a cool idea,” said Jones. “They’ve got the place all decorated, and the hotel is a good community focal point.”

The hotel also offers one benefit that other venues around town can’t match: “There’s lots of parking!” said Jones.

The carol sing at the hotel will actually be the second caroling event that the United Methodist Church will sponsor on that day; members of the congregation will meet at Friends Care Community at 2 p.m. to sing with residents, and then make their way to the hotel at 3 p.m. for more singing. The community is welcomed and encouraged to attend both events.

Though the church has made the effort to bring the carol sing back this year, Jones said that the church feels no ownership over the event.

“It belongs to the community,” said Jones. “Singing brings people together, it breaks the barriers between different denominations — and it’s fun! So to me, it doesn’t matter who’s in charge in the future. As long as it’s still here.”

Scroll down to read the announcements of the original carol sing from the 1956 volume of the YS News, and see a few pictures.