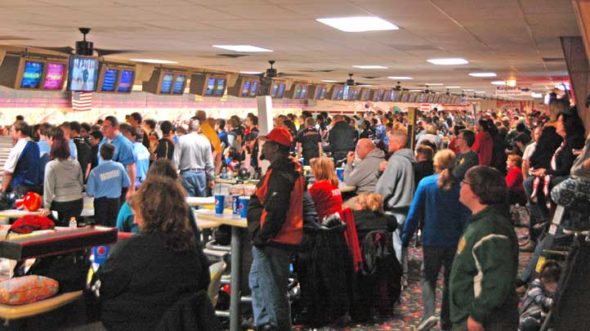 The YSHS bowling team was one of 52 teams crammed into Beaver-Vu lanes last week as part of tournament hosted by Wright State University’s bowling program. So packed was the tournament that spectators brought stepping stools and homemade periscopes. Coach Matt Cole said that organizers were very happy to introduce a first-year team into the fold. (Photo by Dylan Taylor-Lehman)

When pulling up to a bowling alley, one does not normally expect to have to park at an ancillary lot a few buildings away or navigate the sardine-tight crowd inside the bowling alley. And yet this was the sight that awaited the members of the Yellow Springs bowling team last Saturday when they arrived at Beaver-Vu Lanes for the Wright State Collegiate Challenge bowling tournament.

The WSU Challenge was a tournament organized by the WSU bowling team, designed to show high school students what college-level bowling is like. According to tournament literature, “high‐tech equipment and forgiving lane conditions tend to conceal weaknesses in the games of even the top young bowlers. Competing on the lane patterns used in the highest level of competition can help you find and eliminate weaknesses in your game.” The tournament was also a fundraiser for WSU’s prestigious self-funded collegiate bowling team. WSU’s women’s bowling team is currently number one in the country, and its men’s team is number five.

The sheer scope of the Challenge made for the impressive crowd. No less than 52 teams from all across Ohio were scheduled to compete, and there would have been 60 but for the weather. Each team had at least five bowlers and a coach, and each team brought with it a phalanx of parents and supporters. Only the bowlers were allowed on the benches and tables by their assigned alley; everyone else had to stay on the carpeted throughway, which is why at least half of the fans brought with them a stepladder of some kind. The entire back wall was lined with parents standing a foot or two above the crowd. For those who couldn’t bring stools or a foldable painter’s bench, homemade periscopes did the trick. Yes, indeed, bowling fans handcraft sturdy cardboard periscopes to see the bowling action. And not only did they have homemade periscopes, but they had periscopes emblazoned with hand-painted slogans, designs and players’ names.

Being new to high school bowling this year, YSHS supporters did not have the stools and periscopes of the veteran teams but rather the bewildered expressions of people who had no idea that high school bowling was such a popular sport. And it was this popularity that caused YSHS bowling coach Matt Cole to issue a disclaimer before the team arrived.

“The students you are about to play have been bowling all their lives, they have a pile of bowling balls, this is all they do — bowl,” he said, elaborating further by saying that the top 25 players in the WSU tournament would be able to hold their own against probably anyone in the country.
Nevertheless, the YSHS bowlers were happy to be there and not especially intimidated by their opponents. In fact, as the YSHS team bowled, it became apparent that any player on the team could likely beat any person on the street, no small feat considering almost every Bulldog bowler only started taking the sport seriously at the beginning of the season.

Team scores were cumulative: five bowlers bowled two individual games each, and then there were eight Baker’s games, in which five players bowled two frames each game. The tournament was elimination-style, with high team scores qualifying teams for subsequent rounds.

While the Bulldogs did not make it far into the tournament, Cole had nothing but good things to say about the experience and about the tournament organizers, who made a point to welcome the new YSHS team into the fold.

Not all matches are going to be as jam-packed as the WSU tournament, Cole said. It’s easily the biggest tournament of the season, with YSHS scheduled to participate in only one other tournament. Either way, it was an introduction to a new world, Cole said, and one of the most exciting iterations of it.