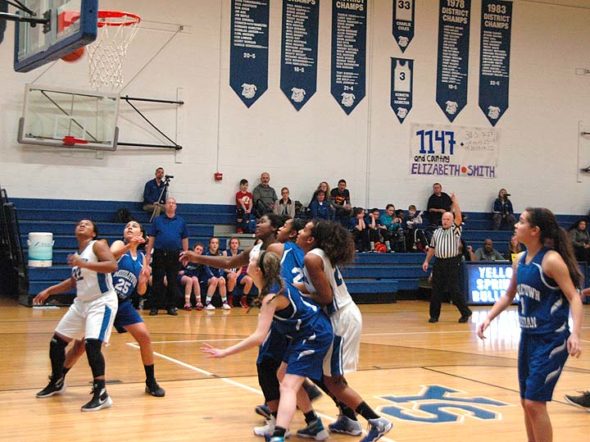 YSHS Bulldog Liz Smith (#22) was poised to go after a rebound during their game with the Middletown Christian Eagles on Jan. 23. The game was a fast-paced exchange of points, turnovers and finesse up and down the hardwood, ultimately leaving the Bulldogs victorious. The final score was 70–52. (Photo by Dylan Taylor-Lehman)

Athletes are just over halfway through the winter sports season, and according to Yellow Springs Schools athletic director Nate Baker, it is a time when the competition starts to really heat up. Almost all of the games the various teams play in January are conference games, and the athletes are feeling a mix of fatigue and a renewed sense of fight.

“Once you get back from Christmas break, it’s serious,” Baker said.

Baker’s assessment was made while watching the YSHS Bulldogs girls basketball team play its Jan. 23 game against the Middletown Christian Eagles, and it was evident that the seriousness he described was in full effect. The game was faster paced than some recent basketball outings, with the teams charging up and down the court and barely stopping to breathe after a basket was made. By the end of the first quarter, the score was 19–18 in Yellow Springs’ favor.

A series of missed shots in the second quarter raised the score in the opponents’ favor, at one point giving them a seven point lead. But a turnover and an interception helped lessen the gulf between the figures, and a couple of impressive field goals and layups kept the score close. The score was 35–30 by the half. A banner touting senior Elizabeth Smith’s career points (“1147 and counting!”) loomed over the visitor’s section.

There was a brief exchange among coaches and refs in the third quarter when the score was 43–37 in the Bulldogs’ favor — “was it a blocked shot or an out?” — but no matter the outcome, the home team racked up more and more points, propelling them towawrd certain victory. Junior Jasmine Robinson exemplified the team’s approach by almost lackadaisically snagging the ball away from the opponents just as the third quarter came to an end, as if to prove they could do it with attitude and ease.

As the fourth quarter wore on, a turnover and a comfortable 15-point lead by the Bulldogs made for a height to which the Eagles simply could not soar. With six minutes left in the game, senior Morgan Minnich sunk her fourth three-pointer of the night. As the crowd’s exhortations for the visiting team to miss usually resulted in the opposite outcome, the Bulldogs were able to taste sweet victory, ending the game with a final score of 70–52. The team is currently 8–8 for the season, and 4–3 in the Metro Buckeye Conference.

YSHS Bulldogs boys basketball assistant coach Phil Renfro expounded upon his team’s approach halfway through the season. The team should be settled into a groove by this point, he said, and should be trying to peak by the end of the year. The team is in a tough position, as there are only 14 players on both the JV and varsity teams combined, a few of whom are injured and had to sit out a number of games.

Nevertheless, Renfro has been helping the team learn some of the life lessons of basketball, in which the team has to pay its dues before reaching the top. While the team’s record is currently 2–13, many of the games have been lost by only a few points, and two of the games were lost in overtime. The team’s spirits are high, as the relatively young roster has been coalescing as a team.

“We’re in a good place right now,” Renfro said. “We’re back to playing well and the support has been awesome. The community understands it’s a young team that [comparatively] has not played a lot of ball,” and they are being encouraged by the fans, who want to see them grow.

The YSHS bowling team, the newest addition to the school’s winter sports offerings, is likewise finding its bearings and developing its own fierce identity as the winter season wears on. While coach Matt Cole noted that the team has generally come in last place in the tournaments it has played, the players are nonetheless moving forward as bowlers, teammates and Bulldogs.

To give an example of this progress, Cole cited the fact that many bowlers routinely score over 150 points per game. A score of 150 means at least five spares and every other frame being a score of eight or nine. For people without a lot of previous bowling experience, 150 is remarkable, he said. A few bowlers have scored more than 20 points beyond that, prevented from further success by an errant gutter ball. As everyone has been improving, the team has a number of good bowlers to chose from when putting together the eight-person squad that competes in each tournament. There are a few regulars on the team, but the other positions rotate in and out. The team’s next match, the Pirate Challenge at Capri Lanes in Dayton, will boast a co-ed team bolstered by the appreciation for their own progress.

The community has also been supportive of the bowling team. A recent fundraiser brought in some money for the bowling Bulldogs, part of which will be used to get names embroidered on bowling bags. In fact, the fundraiser was so fun that it will likely become an annual benefit, held on the Sunday of the Martin Luther King Junior holiday weekend.

All in all, the camaraderie, the tournaments and the ability to see improvement at an enjoyed sport has made for an exciting season for the inaugural YSHS bowling team.

“As far as I know, all of the bowlers are coming back next year,” Cole said.