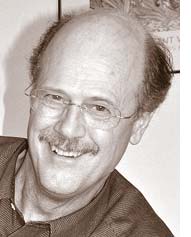 Eric was born on Feb. 27, 1941, to Lynton and Valeska B. Appleberry, and took his last breath on Jan. 18, 2017. He was a man who loved his wife, his children, his vegetable garden, his dental profession and helping others.

Eric grew up in the village of Yellow Springs, a place and community that remained close to his heart throughout his life. At age 12, just before starting 7th grade, he began working at the Yellow Springs News doing odd jobs as a “printer’s devil,” and within a year was running the huge 1895 Babcock press. He credited these early years for his later ability to easily “read” his dental patients’ mouths upside down and backwards. According to a 1958 newspaper profile, he was known at the print shop for his technical expertise, calm under pressure, impish humor and feisty spirit. These traits never left him.

After graduating from Bryan High School in 1959, Eric attended Ohio State University, where he pursued his future wife Patricia Paxton and his Doctor of Dental Surgery degree with equal dedication and resourcefulness. He and Pat married in 1964 and were soon joined by daughters Jennifer and Nicole. In 1968 Eric entered the United States Air Force; the family was stationed in California, then Japan, where daughter Gretchen was born. In 1972 they moved to Ann Arbor, where Eric earned his specialty degree in periodontics at the University of Michigan School of Dentistry. He then taught at the university and eventually transitioned into full-time private practice.

At home, Eric made time for nightly family dinners, frequently illustrating scientific concepts for his daughters on a seemingly endless series of napkins. He enjoyed playing folk guitar and caring for tropical fish in his 75-gallon saltwater tank. Influenced by his parents’ homesteading, Eric and family moved to the countryside east of Ann Arbor where he spent many a happy hour planning and working in their giant garden. He loved taking long runs down dirt roads, soaking in the sights and sounds of the rural landscape.

Eric always chose to move forward through challenges with a positive outlook. Even after a spinal cord injury in 1998 left him paralyzed from the chest down, he concentrated on what he could do, not what he couldn’t. He recruited friends to help adapt his John Deere tractor with hand controls and a boat-winch-powered seat lift. An avid photographer, he continued to document family gatherings and the beauty of nature. He kept up with a wide circle of friends through the magic of the internet.

Eric’s wholehearted commitment to serving others took many forms over the years. He was devoted to his patients and meticulous in their care. After his injury made private practice impossible, he found other ways to contribute to his profession and community. He reviewed articles for the Journal of Periodontology and served on the UM Medical School’s Institutional Review Board. He volunteered as a member of the Dean’s Faculty at the UM School of Dentistry, providing students with a long-term practitioner’s perspective. Although he had received a number of awards throughout his career, he felt particularly honored when the periodontal program’s graduating class of 2011 selected him for their Faculty Appreciation Award.

Eric was a member of the First Unitarian Universalist Congregation of Ann Arbor and served as its treasurer and on multiple committees. He worked with organizations advocating for people with disabilities. In order to give hope and practical advice to others newly facing life with paraplegia, he wrote articles for and helped edit the UM spinal cord injury program’s SCI Access newsletter.

On toasting occasions, Eric would raise a glass to those unable to be present, through death or otherwise. He believed that those who have died live on in the hearts of the people whose lives they touched. Eric carried in his heart his parents, Lynton and Valeska, and his sister, Valeska Lynne Lindner.

In lieu of flowers, please consider donating to the First Unitarian Universalist Congregation of Ann Arbor or the Humane Society of Huron Valley, or simply think of Eric as you share an act of kindness in the world.

One Response to “Eric Appleberry”