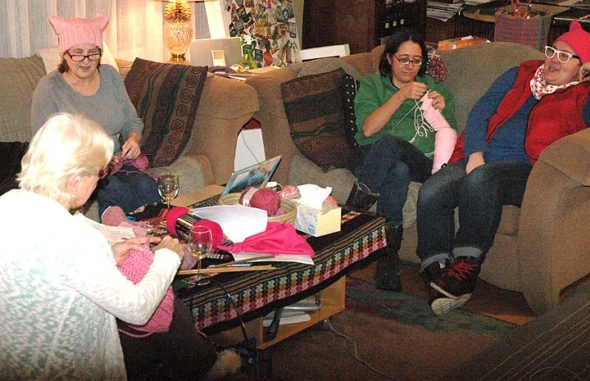 From left, Linda Sikes, Eve Fleck, Kate Mooneyham and Katie Rose Wright gathered Monday evening at Fleck’s home to crochet and knit pink, cat-eared “pussy” hats for participants in the Women’s March on Washington, Jan. 21, to wear. The women are participating in the Pussyhat Project, a national initiative tied to the march. Local resident Annie Blanchard is set to host several other hat-making gatherings at the Emporium at 10 a.m. Wednesday, Jan. 11, and Friday, Jan. 13. (Photo by Carol Simmons)

Local women to march on D.C.

On Saturday, Jan. 21, the day after the presidential inauguration, hundreds of thousands of women from across the United States are planning to converge on the nation’s capital for the Women’s March on Washington. And many Yellow Springs women will be among their number.

Getting an advance head count is impossible, but anecdotal word of mouth suggests more than 100 local women — 54 on a chartered bus —– will be heading east for the march. Others, who can’t make it to D.C., plan to participate in “sister” marches in Ohio — one is scheduled Jan. 15 in Columbus, while marches in Dayton, Cincinnati and Cleveland are planned on the 21st.

The reasons women will participate are as diverse as women themselves, but the galvanizing impetus was the outcome of the presidential election. Yellow Spring resident Annie Blanchard, who has reserved a seat on the local bus, noted that the national organizers are stressing that the gathering isn’t meant to be an anti-Trump rally, but rather is being planned to inspire and promote a movement around issues related to women — issues that came forward during the election campaign as we saw the real possibility of a woman becoming president of the U.S. and then earning nearly three million more votes than her opponent.

The idea for the march grew exponentially on social media in the days immediately following the election. Locally, Christine Monroe-Beard started exploring the possibility of securing a bus. She said she’s part of a 14-women group of friends who get together each fall for a weekend retreat, and she queried them about their thoughts on getting a bus for the march. “If we have interest, then others have interest,” Monroe-Beard said.

They had interest.
Monroe-Beard reserved a bus through a company that specializes in transporting groups to one-day events ranging from the sporting to the political. She also set up a Yellow Springs-oriented page on Facebook to secure passengers. The bus needed a minimum of 40 riders to confirm the trip.

“The response has been insane,” Monroe-Beard said. So many people responded that she went back to the company to see about reserving a second bus, though at press time, it appeared that no more buses are available. Apparently, some women who made reservations on the company’s website didn’t know that signing up for the bus Monroe-Beard had reserved needed a specific password, and they weren’t able to get a seat. She had hoped a second bus would take care of the disappointed women as well as others who had come forward after the first bus had filled.

The coach-style bus that has been confirmed will leave Yellow Springs at 11:45 p.m. Friday. Jan. 20, then drive through the night and deposit its passengers in D.C. on Saturday morning. The return trip begins Saturday evening with an anticipated arrival back home at 4:30 a.m. Sunday.

Monroe-Beard said she didn’t expect to sleep much on the way to D.C. She’ll be too excited.

While the national march organizers say the gathering isn’t anti-Trump, Monroe-Beard said she is, at least in terms of his presidency. “The catalyst for me (to go to Washington) was to protest Trump’s presidency. I am appalled at the idea of him being president. I don’t think I’ve ever wanted to protest as much as I do now.”

She hopes the march is the beginning of new alliances and initiatives. “I believe in strength in numbers,” she said. “I’m loving the fact that there are so many of us becoming more aware and vocal.”

On the national front, the march initiative has raised issues and questions of race and class within women’s groups and organizations. The initial organizers were criticized for the lack of diversity among their ranks, and media reports have shown their attempts to be more inclusive. Nevertheless, on the local level, the Yellow Springs contingent appears to be mostly white. Travel costs, being able to get away and available accommodations are among the considerations.

In addition to those traveling on the bus, other women in town planning to go are car-pooling or meeting up with friends near or in the city. They’re staying on couches or in hotel rooms that had been reserved for people expecting to attend Hillary Clinton’s inauguration.

Linda Sikes, who is driving with one or two local friends and meeting up with another friend from Maine, said she is experiencing many emotions after the election. “I’m just so upset, distressed, nervous, scared, horrified — pick an adjective — that Trump is going to be our president. He has just said all these misogynistic statements about women.”

Sikes described her state of mind in response to a question about her reasons for going to the march as she crocheted a pink, cat-eared “pussy” hat Monday evening during a knitting/crochet party at the home of Eve Fleck. The gathering was in response to the Pussyhat Project, a national initiative to provide the people of the Women’s March “a means to make a unique collective visual state which will help activists be better heard,” according to project organizers. Fleck has already made several hats to share with marchers and has secured a quantity of yarn in various shades of pink for others in town who would like to join the handicraft effort.

Fleck can’t attend the march because of a work commitment, so in addition to making hats, she is financially sponsoring two women to take the local bus. Kate Mooneyham, who also cannot go to D.C., is sponsoring a marcher as well. She, too, was knitting a hat.

“If you can’t go (to Washington) and if you want to feel that you contributed to the movement,” making a hat can help, Fleck said. Villager Annie Blanchard has scheduled additional hat crochet/knit gatherings at the Emporium at 10 a.m. Wednesday, Jan. 11, and Friday, Jan. 13.
Fleck said that the election results left her feeling devastated. “I sobbed,” she said. “I filled a wastebasket with tissues.”

Katie Rose Wright, who attended Fleck’s gathering, had designed and sewed a hat out of fleece fabric that she plans to wear. She is going to D.C. on the chartered bus. “I’m a very activist person,” she said. “I know in my heart I will majorly regret if I don’t (go).”

Wright, who at 33 counts herself as a “millennial,” said she has been fortunate in ways that may be in jeopardy under a president who appears to devalue women. “It’s sad. For the majority of my life, I’ve been able to just be a human and have opportunities. It’s sad that there are girls who will feel as if they’re less than.”

She’s also concerned about the future of Planned Parenthood, which she noted serves men as well as women, and issues related to women’s health.

Fleck agreed. “It really feels like it’s a war on women in every way.”

“It’s a war on everybody that’s not white and rich and definitely on women,” Sikes added.

In a separate conversation, Monroe-Beard had said much the same thing. “My own personal opinion is we’re kind of ready for a revolution.”