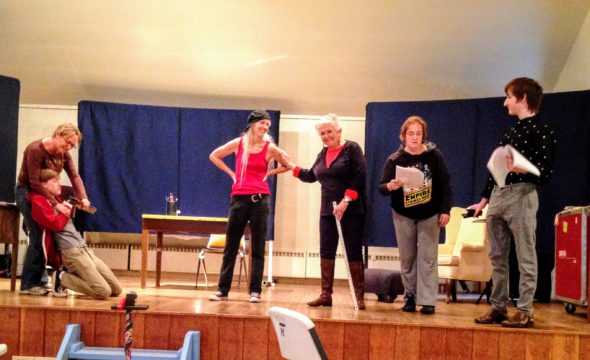 Local actors rehearse for the Ten Minute Play Festival, which will be held Jan. 27 and 28.

The annual 10 Minute Play Festival, presented by the YS Theater Company, will return for another weekend of short play performances this Friday and Saturday, Jan. 27 and 28.

This year’s festival is produced by Ali Thomas and Miriam Eckenrode-Saari – who are also both acting and directing in the festival. This is par for the course, said Eckenrode-Saari: “Well all kind of do a lot. Colton [Pitstick] is in five plays!”

Those attending may notice quite a few familiar names on the list of writers, directors and actors, as most of those involved with the festival are local, some of whom are not typically involved with the theater.

“The festival is kind of [YS Theater Company’s] tie to the community,” said Eckenrode-Saari. “Anyone can submit, anyone can direct, anyone can participate. It gives us a way to connect with the town, not just those in the company. It gives folks who might not otherwise audition — or who might not be cast when there are more experienced actors auditioning — a chance to perform.”

The plays this year are a mixed bag, said Eckenrode-Saari, and include comedy, drama and some experimental pieces. “There’s one that’s about military guys, one about cartographers, one about a missionary and a sports fan in Manhattan,” she said. “Ten minutes is not a lot of time, so often the ideas are either very small or very big.”

Performances begin at 8 p.m. on Friday and Saturday at the First Presbyterian Church, with doors opening at 7:30 p.m. Admission is $10 at the door, with proceeds supporting future YS Theater Company productions. For more information on the YS Theater Company, visit http://www.ystheater.org or follow them on Facebook.