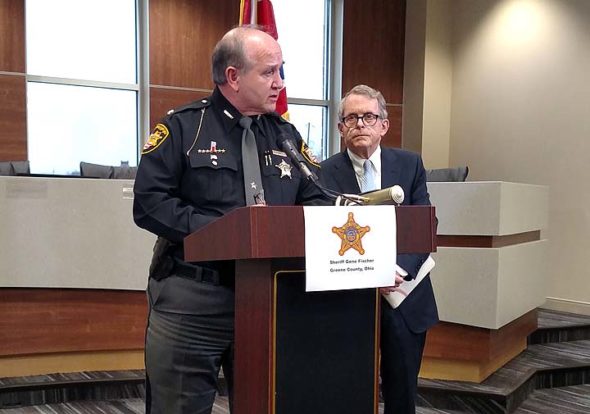 The two brothers arrested last week in connection with the murders of William “Skip” Brown and Sherri Mendenhall have been identified as family members of one of the victims.

Greene County Sheriff Gene Fischer and Ohio Attorney General Mike DeWine announced at a press conference last week that Dustin Michael Merrick, 25, and Bret S. Merrick, 24, were arrested in Xenia on the evening of Jan. 24 for the killings that took place at 4444 E. Enon Road on Jan. 15.

In a follow-up interview, Fischer confirmed that the brothers are the sons of Bobbi Brown, wife of David Brown, Skip Brown’s brother. Dustin Merrick was known to have worked with Skip as an employee of his roofing company, Legendary Roofing, including doing work on a number of buildings in the village.

Dustin Merrick was taken into custody without incident at his residence on Parnell Drive in Xenia and Bret was arrested the same night at his place of employment, Fischer said at the press conference.

The elder brother had been considered a “person of interest” in the case, Fischer said last week, including being interviewed by investigators on Jan. 20. Police had also previously seized a firearm belonging to Dustin Merrick that they believe to be the murder weapon. Subsequent ballistic and forensic testing revealed it to be a match with the weapon used in the crime.

Based on the evidence presented by the Sheriff’s office, the court issued a warrant for the brothers’ arrest, culminating in the arrests last Tuesday night.

Sheriff Fischer reiterated in a subsequent interview that he could not disclose information about possible motives for the murders of Brown and Mendenhall at this time.

“We’re not done. There’s still more to investigate,” he said at Wednesday’s press conference. “More interviews to conduct and more evidence to process.”

The brothers were arraigned separately at the Xenia Municipal Courthouse on the afternoon of Jan. 25. Dustin Merrick was represented by Dayton defense attorney Anthony S. VanNoy, who was also representing Bret Merrick until he could obtain his own representation.

The judge ruled that the brothers each be held on $750,000 bond. The brothers were taken back to Greene County Jail following their arraignment.

The Merricks were slated to appear before a grand jury on Feb. 1. The grand jury will determine if there is enough evidence to take them to trial.

Members of the Brown family did not respond to a request for an interview about the recent developments in the case.

At Wednesday’s press conference, Fischer shed more light on the events of Jan. 15, referring to the statement of facts on the case submitted to the court by the Greene County Sheriff’s Office.

The brothers entered Brown’s residence on East Enon Road in the early morning hours of Jan. 15. Brown was apparently alerted to their presence and attempted to dial 911. Brown was shot in his apartment with the firearm later recovered at the Parnell Drive residence.

According to Fischer at the press conference, after Bret Merrick was arrested and read his rights, he made the admission that he and his brother entered Brown’s apartment, and that both were armed. Mendenhall lived in the other half of the duplex, and quoting from the statement of facts, Fischer said Bret admitted he fired at but did not hit Mendenhall when she came to investigate the noises in the neighboring apartment. According to the statement of facts, Bret said his brother shot her as she tried to flee the residence. She succumbed to her injuries in the driveway, where she was later seen by the jogger who alerted police.

The statement of facts revealed that Bret told investigators that Dustin fired all of the fatal shots, and that he was acting primarily as a lookout for his brother.

Subsequent testing of the firearm recovered at the Parnell Drive residence revealed that three spent rounds of 9mm ammunition found at the scene matched Merrick’s gun, and that Dustin Merrick’s DNA was found on an unspent round recovered from the scene, Fischer said at last week’s news conference.

According to Douglas Berman, a law professor and expert on death penalty cases at The Ohio State University, aggravated murder is “one of the most severe prosecutable offenses,” and the only murder charge that brings with it the possibility of the death penalty in Ohio.

Murder is considered aggravated if it is defined by certain circumstances, Berman said, such as being committed with “prior calculation and design” (also known as “premeditation”) or in conjunction with another felonious act. According to the charges filed against the brothers, the murders were committed in conjunction with a burglary, resulting in the elevated charges of aggravated murder.

The prosecution has a lot of discretion in choosing what charges to pursue and how, Berman said. While the Merrick brothers have been charged with aggravated murder and complicity to aggravated murder, the nature of the charges may evolve as the case moves forward. Specific charges can change as the prosecution and defense negotiate how the case will proceed, he said.

Representatives at the Greene County Prosecutor’s Office are unable at this point to comment about their approach to the case, according to Fred Meadows, an investigator with the prosecutor’s office.

“We don’t know where we’re going with it yet — we still have to work things out with the defense attorneys,” he said.

Defense attorney VanNoy did not respond to requests for an interview in time for -publication.

At last Wednesday’s press conference, Ohio Attorney General Mike DeWine characterized the arrests as the result of “old-fashioned police work plus modern forensics.” He expressed gratitude for the multitude of agencies and agents involved in making the arrest, crediting them as “the type of law enforcement that makes a great deal of difference.”

Fischer said the sheriff’s office is continuing to ask the community to use the tipline established for the case to provide investigators with any additional -information.

Anyone with any information, “no matter how trivial,” according to authorities, is encouraged to call and leave a message at 937-562-4819.

“This is a great tragedy,” DeWine said last Wednesday. “A tragedy for the victims, the Brown family, the Mendenhall family, and it’s really a tragedy for the Yellow Springs community.”