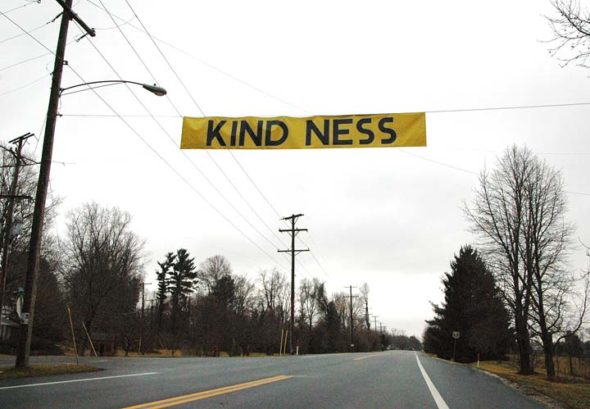 The Village of Yellow Springs’ Arts and Culture Commission has hung banners on the north and south ends of Xenia Avenue in Yellow Springs. The banners’ message, “Kind Ness,“ is intended to spur conversation and reflection about community values. (Photo by Dylan Taylor-Lehman)

What KIND of village?

Yellow Springs is a village of noticeable signs, from the “Springs” mosaic welcoming visitors on Dayton Street to the “Trump Kills” (née “Fracking Kills”) graffiti beamed down to pedestrians from the side of the Little Art building. For the next three weeks, a new set of signs has joined these, a semiotic gesture intended to transmit the underlying sentiment of the village to travelers and residents alike.

The banners can be seen over the north end of Xenia Avenue next to Subway, and across the road on the south end near Allen Street. The signs are 21 feet long and three feet tall, and with blue words on a yellow background, they are hard to miss. The text on both signs read “KIND NESS,” with the conspicuous space between the syllables a deliberate stylistic choice.

The banners were put up thanks to the Village’s Arts and Culture Commission, or ACC, a citizen group devoted to public art. Part of the committee’s work includes the VIDA Awards, operating the John Bryan Gallery (soon to reopen), designing the skate park and developing the Village’s official agreement between street musicians and business owners, according to ACC chair John Fleming, who also conceptualized the banner project. The banners were printed for the ACC for free, thanks to the generosity of an Ohio printing company.

According to Fleming, the cryptic spelling helps convey the nuances of the intended message. The phrase “Kind Ness” has a few layers, he explained. First, observers can read “Kindness,” and the banners serve as a general encouragement of that practice. Second are the meanings of each part of the word, Fleming said: “Kind,” in the sense that there are many different kinds of people in the world, and “Ness,” which is a suffix meaning “to be in a condition of.” Taken together, the phrase puts forth the idea that there are many different kinds of people all currently existing in a state of being on this earth.

The acknowledgement of kindness/kind ness is especially important in what Fleming called “The Age of Trump.” The banners are intended as a refutation of the divisiveness fostered by his campaign, said ACC member Britney Baum, who helped design the banners and facilitated getting them printed as a donation.

Fleming admits that the unconventional spelling has raised a few eyebrows, to the degree that the Village crew received a few worried phone calls about a misspelled sign. But making people stop and consider what the banners mean is partly the point, he said. Like any good piece of conceptual art, Fleming said, the message is more powerful when one has taken the time to reflect. There is power in its conceptual abstraction, as opposed to the relative banality of a more straightforward inducement to be nice to each other, he contended.

“It is intended to be something you think about, like a Pollock painting versus an Andrew Wyeth,” he said.

Fleming introduced the idea for the banners to Village Council in December. Council Vice President Brian Housh, liaison to the ACC, was moved by Fleming’s idea. Council wasn’t necessary looking for a project like this, Housh said recently, but the message and the intriguing way it was delivered made the project a go. Housh said he was certainly aware of how hard many people were hit by the outcome of the November election, and Fleming’s project reflected a guiding principle of the ACC: how can art inspire conversation and reflect the values and attitudes of the community?

“I see it as a way to remember that what’s most important is community,” Housh said. “What can we do locally to collaborate and problem solve?”

Both Fleming and Housh acknowledged the irony of the Village promulgating a sentiment like “Kind Ness” only a few weeks removed from the fractious events of New Year’s Eve. Some villagers have speculated that the Village put it up as a Band-Aid to the current tension in town, Fleming said, but the project was on the table since he pitched it to Council last year. In fact, the “Kind Ness” concept hearkens back to a play Fleming was in in the 1980s called “Kind Ness,” in which six characters — one of whom was a talking gorilla — explore the similarities and differences within their own community as they grow up. While the sentiment this time around was a direct reaction to Trump’s election — the banners went up to coincide with Trump’s inauguration — the intended message is all the more appropriate considering the events in the village so far this year.

The banners will stay aloft for the next three weeks. They’ll be taken down but will go back up in the spring to coincide with the reopening of the John Bryan Gallery in the Bryan Center, which will be a show featuring pieces themed around “Kind Ness.” The ACC is currently calling for submissions.

“It’s about being kind and not a bully, for Trump and for all of us,” Fleming said. “We recognize there are differences and we embrace that.”