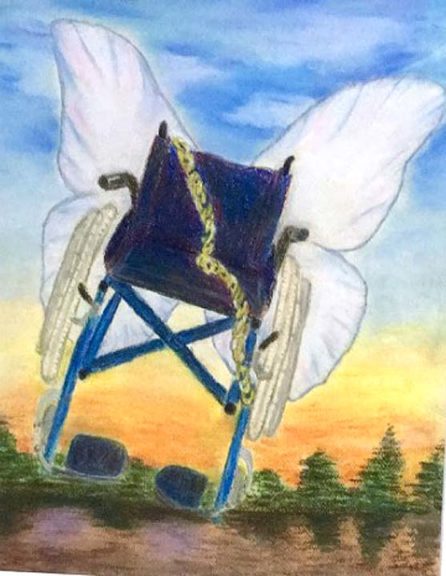 “Dichotomy — Chains and Wings,” a pastel drawing by local artist Theresa Mayer, will be featured in a new exhibit, “Try Another Way: Redefining Dis-abilities.” Showcasing works in various media by local artists living with disabilities, the exhibit will open with a reception at the YSAC Community Gallery on Friday, March 17, from 6 to 9 p.m., and will stay up through April 15. (Submitted photo)

Theresa Mayer loves making glass beads. But she can’t make the kind she loves most in the way most bead-makers do, since a long-ago car accident left her with diminished control of her hand. So she devised a different approach to the bead-making,

“I figured out how to adapt. Basically, I’m doing it backwards,” she said in a recent interview. “I tried another way.”

In a wheelchair for 17 years, Christine Johnson often finds she can’t do the things she wants to do in the way she once did them. But she knows she can either accept that she just can’t do these things, or she can find a new strategy.

“I like to do the same things, I just have to do them differently,” she said recently.

Mayer and Johnson are two of the artists offering their work in “Try Another Way: Redefining Dis-abilities,” a Yellow Springs Arts Council exhibit featuring the work of persons with disabilities or living with those with disabilities.

The exhibit opens this Friday, March 17, with a reception from 6 to 9 p.m. at the Arts Council gallery. At the opening, Johnson will read a poem or two, including one called, “I Hate Being Controlled by Curbcuts.”

The idea for the show came during a meeting of the Arts Council gallery committee, when Nicki Strouss, manager of the Yellow Springs Pottery Studio, talked about her recent experience teaching ceramics to a group of Yellow Springs High School students with special needs. Excited about creating a show around the theme of artists who also happen to have disabilities, the committee decided to launch the exhibit.

The exhibit’s purpose isn’t to hold up artists with disabilities as different from others, according to Arts Council Gallery Coordinator Nancy Mellon. Rather, it’s to look closely at what all of us have in common.

“It’s the sharing of stories, people being able to understand each other better,” Mellon said recently. “I’m expecting growth in myself.”

Along with Mayer and Strouss, several students from Strouss’ class will take part, along with other members of the community.

One aspect of the exhibit is to look closely at the word “dis-ability,” and consider how most of us are disabled, at one time or another, according to Strouss. Both the very young and the very old need help in different ways, and others going through specific life changes, such as pregnancy, also need assistance. Some people are disabled in obvious physical ways, while others, such as those with learning disabilities or mental health issues, are invisibly disabled.

But most important is the person, not the disability, Mayer says.

“We’re all people,” she said. “The rest is just adjectives.”

Yet there’s no denying that the journey of a person with a disability can be a difficult one. For Mayer, that journey began when she was a young mother at age 30 whose neck was broken in a car accident. She was initially paralyzed from the neck down, and spent five months in the hospital. Doctors didn’t expect her to walk again, but Mayer, who at the time taught children with disabilities, wasn’t giving up so easily.

“I complained about not getting enough therapy,” she said. “I knew I should be doing much more.”

So she pushed herself fiercely. Now, three decades later, she walks just fine, although with the help of an electrical stimulator strapped to her leg that lifts her left foot up when she walks. And she needs to continually exercise her hands, to keep them flexible.

It’s been a long road, and Mayer addresses some of her challenges in the artwork she submitted to the show.  One piece, a collage, is called “Eyes,” and it shows rows upon rows of eyes staring out. On one side of the collage is the word “Staring,” and on the other side, “Opportunity to Educate.”

Mayer prefers to see herself as someone taking the opportunity to educate others, she said, rather than a disabled person being stared at by curious people.

Mayer’s second submission, “Dichotomy,” is a pastel painting of a wheelchair, adorned with both wings and chains. It’s a dichotomy she knows well, from those months right after the car crash.

But decades later, while not wishing such a tragedy on anyone, she can see how the effects of her disability has changed her life in ways she didn’t expect.

Nicki Strouss comes at the topic of disability from a different angle, that of someone who grew up having difficulty reading and spelling. She found  working with clay and visual images to be much more satisfying than working with language. She has several ceramic figurative pieces in the show.

Also in the show will be ceramic pieces by the Yellow Springs High School students who she has taught the past six weeks, in a new program funded by a grant by the Yellow Springs Community Foundation. The students, in the class of Jody Chick at YSHS, call themselves the Clay Dogs, and Strouss has found teaching them to be a reminder of how alike people are, rather than how different.

“I approach teaching with the idea of meeting the students where they are and inviting them to move toward greater understanding of what, why and how to make things,” she wrote in a press release. “In the Clay Dogs group, some students have people with them to help with gripping and manipulating, some need more than one explanation of the steps in the process. This is common with the very young/old, the injured, and a lot of people. Patience and pronunciation seem to help … with all people.”

For Jill Cox, program director of the pottery shop who has attended the classes with the special needs students, the class has been valuable not only in teaching art to the young people, but in working with them on socializing, communicating and strategies for handling frustration. And she’s been touched by how supportive the young people have been to each other.

In her life, Cox has known several artists with disabilities, and she’s been inspired by how art allows them to express themselves in new ways.

“We’re presenting the artwork as the valid work that it is,” she said. “But it has an extra story to go with it.”