Yellow Springs boys basketball coach Bob Carpenter spoke about the team’s hard work and dedication at the Winter Sports Award Night on Monday. The gym was packed with parents and siblings, who cheered on the various McKinney and Yellow Springs athletes recognized for their achievements this season. (Photo by Dylan Taylor-Lehman)

The winter sports season, like every sports season, can officially come to a close following the banquet thrown to honor its athletes. The gym was packed with parents and siblings on Feb. 20, who cheered on the various McKinney and Yellow Springs High School teams that took the stage to be recognized for their achievements this season. 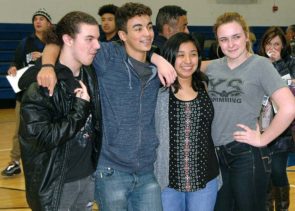 Every team was represented — boys and girls basketball, bowling and swimming — as well as the high school’s cheerleading squad. Coaches gave poignant remarks and bestowed certificates and awards on the athletes they’d just spent so much time with.

For some teams, the season entailed overcoming challenges, such as a JV boys basketball team that was “plagued with injuries,” while for others, the season demonstrated that any athlete can improve tremendously and become a seasoned bowler or swimmer.

The coaches had their individual ways of recognizing the acts of sportsmanship and athletic valiance. Morgan Mahalsky, co-coach of the JV boys basketball team, used the letters of each player’s first name to create a list of reasons why that player was great while Hardwick presented each swimmer with a double-sided certificate with their individual achievements and the team’s grueling, 51-practice schedule so they wouldn’t forget the hard work they’d put in. Girls basketball coach Tim Minnich gave a verklempt thanks to the community for welcoming him so warmly while bowling coach Matt Cole said he was proud to be coaching in the state with more high school bowlers than any other.

High schoolers were given letters for their varsity jackets while senior players were bid a special goodbye as they go on to play sports in a different realm.

Following the hour-long ceremony, students were dismissed and promptly raided a table set up with cookies and cupcakes.

Two teams had to tie up some loose ends before calling it a night for the season.  A YSHS swimmer raced her way to state swim finals while the boys’ basketball team competed in the district tournament.

“In a season run that has been nothing but exceptional, our best swimmer Olivia Chick had a stellar finish at the state swimming finals held in Canton, Ohio,” Coach Hardwick said recently.

Chick was the lone Yellow Springs representative at the meet, which took place last week. Chick characteristically went out with a bang, Hardwick said.  She had her best swim ever in the preliminaries on Thursday, creating a new personal record and a new school record in the 100-yard backstroke  with a time of 56:54.  She also swam a blazing 51.29 in the 100-yard freestyle.  This first day of excellent swimming set her up for the finals held on Friday, Hardwick said.

In the finals, Chick was in the top tier and finished fourth in both events, making her a State Champion.  Her finishes were 51.64 for the 100-yard freestyle and 56.55 for the 100-yard backstroke.

The YSHS boys basketball team played their final game of the season last weekend, unfortunately succumbing to the Southeastern Local Trojans 46–39 in the first round of the sectional tournament held at Troy High School last weekend. The team finished with an overall record of 5–17 and a league record of 3–9.