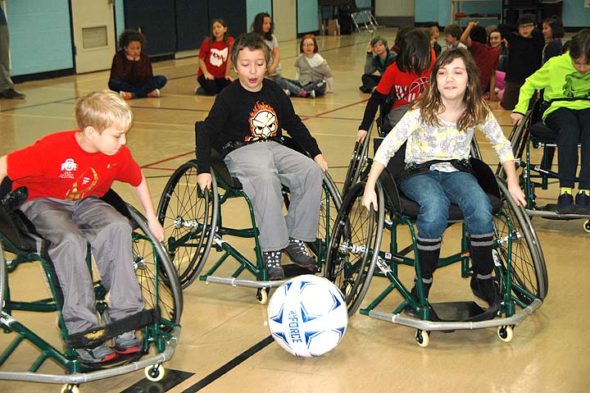 Above, from left, Nick Meister, Tyee Meeks and Ayla Arnold play soccer in sports wheelchairs brought over to the school from the Wright State Office of Recreation. (Photo by Robert Hasek)

Eight students from Mills Lawn Elementary School’s fourth-grade classes presented the findings of their recent project-based learning, or PBL, project at last week’s board of education meeting. The project was called “Wheelchair Experience,” which, true to its name, gave students in the class a better understanding of what school is like for their “wheelchair friends.” Students spent half a school day in a wheelchair and then formulated suggestions on how to make future Yellow Springs school buildings more wheelchair accessible.

Students took turns speaking to the board as they read aloud the results of the project. A PowerPoint presentation showed students going through narrow lunch lines and classrooms in wheelchairs.

“I was surprised at how hard it was to move around,” said fourth-grader Payton Horton. Her classmate Maggie Wright agreed. “The normal stuff you take for granted is really hard,” she said.

Wright was referring to normal stuff like going to classes and to the bathroom, as in the latter example students in wheelchairs couldn’t reach the taps when sitting in front of the sink. One student pointed out that the playground was not level with the sidewalk, as in many places there is a large step between the two that prevents students in wheelchairs from readily accessing the playground. Difficulties such as these lead to suggestions such as widening coatrooms and hallways and having lunch tables with removable chairs, as the school currently uses tables with attached benches.

The board also heard from Mia Campbell, a classmate who uses a wheelchair. “I would like a door to the playground so I can get outside by myself,” she said, referencing the difficulty of trying to prop open a door while going through it.

Mills Lawn intervention specialist Linda Kalter helped organize the project in part to help them understand their classmate better. “The purpose was to give all of her peers that experience,” she said in an interview this week. “I am happy with the insights the kids gained from the project.”

Wright State University loaned the class six wheelchairs and sent an instructor to teach fourth-, fifth- and sixth-grade students games in the wheelchairs. Students found that it was difficult to augment regular gym activities to include people both in and out of wheelchairs, resulting in the suggestion of developing games that are more inclusive in this regard.

The culmination of the project, which began last month, was to present the school board with a letter that described their project and outlined a number of suggested improvements.

“Thanks you so much for listening to our ideas,” the students collectively wrote. “We want Mills Lawn School to be accessible to everyone.”

• The board approved a renewed five-year contract for District Superintendent Mario Basora, effective from Aug. 1, 2018, through July 31, 2023. Basora was hired as the district’s superintendent in 2010.

• Basora noted in a handout that the “facilities exploration process is beginning to take form,” as the district is currently putting together committees to engage with the community about the possibility of new school buildings.

The public is invited to the first community forum discussing new building options. The forum will be held at 6:30 p.m. on Monday, March 27, in the YSHS cafeteria.

That meeting will follow the first Facilities Advisory Committee meeting, held at 6 p.m. on Thursday, March 23, also in the YSHS cafeteria. The committee will be made of parents, staff, community members and business owners. Members of this committee will “be provided in-depth reviews and have input in to key management and master planning design issues,” District Treasurer Dawn Bennett said in an email this week. The Facility Advisory Committee will meet approximately four times and will be led by Ruestchle Architects, the Dayton firm selected by the district to lead the community engagement process.

In addition, guidance will be provided by a Core Team made up of Basora, Bennett, school board member Steve Conn, board President Aïda Merhemic and representatives from Ruestchle Architects. The Core Team “serves as the executive group to facilitate the project through timely decision making,” according to Bennett.

• Krier informed the board that all juniors will soon be taking the ACT, which is part of state graduation requirements and an exam whose results are often required for college consideration. The state of Ohio will be paying for the exam, meaning that no student will have to pay to take it. Krier said that some seniors will be serving as mentors for juniors about to take the test, helping them understand what to expect when they take the exam. Greene County Career Center students will come to the high school to take the exam as well.

• Basora announced the retirement of district custodian Keith Harding in a handout to the board. The board approved his retirement starting on July 1 of this year. “He has been a pleasure to work with,” Basora wrote.

• Bennett announced that the district received a $13,000 grant from Lowe’s, applied for by Advancement Officer Dawn Boyer in the fall. The grant will fund an outdoor education facility at Mills Lawn Elementary and supplies needed for outdoor lessons, such as tables, gardening tools and ready-to-use seeds and plants. A timeline for the project is expected to be developed this week, with the hopes that students will have an outdoor work day some time in May. Boyer noted that the district’s grant was one of 20 in the country funded above the grant’s standard amount of $5,000, a bonus she attributed in an interview this week to the school’s good working relationship with Lowe’s and the comprehensive plan that accompanied the grant application.