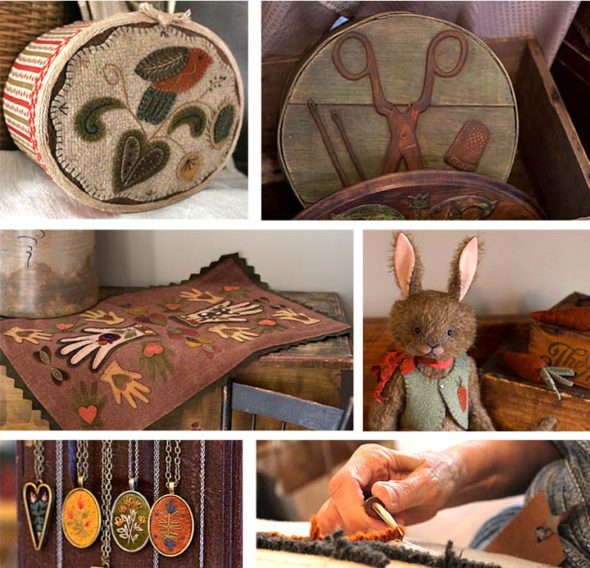 “From Our Hands and Hearts,” an annual creative retreat for needlework artists, is coming to Yellow Springs April 24–27. Organizers are Lori Ann Corelis, a folk artist who sews rabbits, teddy bears and other collectibles, and Rebekah Smith, a wool appliqué artist. The public is invited to a show and sale on the last day of the retreat, April 27, from 1 to 4 p.m. at Mills Park Hotel. (Submitted photos)

Next Monday, April 24, needlework artists from across Ohio and states such as California, New York and Rhode Island will converge on Yellow Springs. They will check into the Mills Park Hotel, and the artists — some known to each other, some strangers — will take up residence there for four days. They’ll stitch, and they’ll stitch some more. They’ll learn new techniques, and they’ll make new friends.

“We stitch all day long. It’s wonderful,” said Lori Ann Corelis, one of the organizers of “From Our Hands and Hearts,” a creative needlework retreat being held at Mills Park Hotel April 24 through 27.

Actually, Corelis and fellow organizer Rebekah Smith will be extremely busy, teaching classes and keeping things humming along behind the scenes. Both needlework artists, they met years ago at a folk art show, and have been friends ever since. They began “From Our Hands and Hearts” several years ago, merging two events they had each separately organized into an annual creative retreat for those involved in rug hooking, wool appliqué, needle punch, cross-stitch and other traditional needle arts.

For the first couple of years, the retreat was held in northern Ohio, where the women also jointly organize another annual event, a folk art and antique show. Smith lives in northeastern Ohio, while Corelis lives on the western side of the state. But various factors led them to seek an alternative venue for their creative retreat, including the desire to find a place attendees could both gather during the day and stay overnight. Corelis was familiar with Yellow Springs from past visits, and had recently seen a friend’s Facebook post about a new hotel opening up downtown. The decision was sewn up from there.

“Yellow Springs seemed like the perfect artsy place for this,” Corelis said. The lively downtown and the walkability of the village were also factors in their choice.

In fact, Mills Park Hotel hosts a wide variety of groups for retreats and special events, according to Assistant Hotel General Manager Monika Lindsay. The hotel markets itself as a venue for weddings, family reunions, business meetings, church retreats and other gatherings. Bicycle clubs, rollerbladers, old-time car enthusiasts, knitters, quilters and stitchers are a few of the groups that have gathered at the hotel since it opened last spring.

“It’s a part of our business we’re hoping to continue to grow,” she said.

In March, the hotel organized a cancer awareness week, with a variety of events including a mammogram unit on site, a gathering of guests and local residents to create heart-shaped pillows to donate to mastectomy patients at Springfield Regional Medical Center and a jazz brunch fundraiser. The events drew people from Yellow Springs and beyond, and raised a total of $1,500 to benefit Circle of Victory, a Greene County cancer charity, according to Lindsay.

Handcraft gatherings have been particularly popular, perhaps because of the hotel’s historic feel, its small size (28 rooms) and, of course, the artistic vibe of Yellow Springs, she speculated.

The organizers of “From Our Hands and Hearts” expect next week’s needlework retreat to draw between 45 and 60 participants — all women, if previous retreats are a guide. Most will be staying at Mills Park, though some may opt for other local lodging. They’ll be dining both at the hotel and in the village, and taking time to stroll and shop.

The retreat consists of workshops focused on specific projects and techniques taught by Corelis, Smith and other folk artist instructors, as well as informal gatherings to stitch in the evening. Workshops include an introduction to cross-stitch, the making of an heirloom sewing box, the trimming of a papier-mâché box with wool appliqué and the creating of a “jaunty” mohair rabbit. Although the event is designed as a cohesive retreat, organizers may be able to accommodate registration for individual workshops, depending on availability. To learn more, visit fromourhands.com.

And there’s a public component to the retreat. On Thursday, April 27, from 1 to 4 p.m., the public is invited to “the Mercantile,” a show and sale in the hotel’s ballroom that will feature finished artwork, as well as tools, hand-dyed wool, thread, rug hooking patterns, antique buttons and other materials. The ballroom is located on the first floor, off the lobby; admission is free. Vendors will set up on the perimeter of the room, while retreat members will continue to stitch in the center, allowing visitors to see some of the techniques first-hand.

“We invite the community to come in and see what we’re about,” Corelis said.

She and Smith share a lifelong love of textiles, folk art and antiques. Smith has a degree in graphic design from the Art Institute of Pittsburgh, but was dissatisfied with the increasing computerization of the work, according to her website. So she turned to folk art, finding “an endless variety artistically,” she wrote in a recent email. She creates wool appliqué artwork using hand-dyed repurposed wools; she also paints on old surfaces in the style of folk artist Rufus Porter. She’s written two books on wool appliqué folk art, one of which will be released in June.

Corelis has been sewing ever since she could hold a needle. Her mother was a seamstress, and her own interests coalesced around stitching. “The greater part of my life has been spent sitting cross-legged on the floor, stitching like a tailor in a children’s fairy tale,” she writes on her website. For 30 years, she’s been making and selling rabbits, bears and other woodland creatures out of wool, velvet and mohair. These are not children’s toys, but rather collectible items, she said. She uses antique textiles wherever possible, and has a special fondness for antique velvet.

Maybe most of all, the two women share a love of stitching and creating in community. “When you share an appreciation for creativity, it’s a natural progression that you want to share your work with other creative people. We so enjoy encouraging one another and creating together,” Smith wrote in an email.

And that’s what they’ll be doing for four days next week. If all goes well, they plan to do it again — same town, same venue — next year.

“We can’t wait to come to Yellow Springs,” Corelis said.