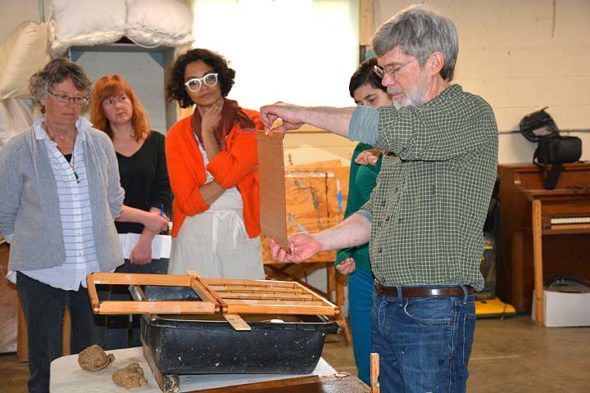 The second annual Ohayo Ohio event will include a Washi papermaking workshop with Antioch alum and MacArthur Fellow Tim Barrett, who studied Japanese printmaking in Japan. He is shown here with participants at last year’s event. (Submitted Photo)

A Japanese aesthetic in Ohayo, 2nd annual in Yellow Springs

Caitlin Meagher was first attracted to Japan for intellectural reasons, as an interesting place to study because the culture is so different from that of this country. In Japan, people think first about the welfare of the group, then of their individual needs, according to Meagher, while the reverse tends to be true in the United States. So she spent two years writing her doctoral dissertation on community housing in Japan as the only acceptable way for young working women to live away from their parents.

And while Meagher, now assistant professor of anthropology at Antioch College, found the topic of her research compelling, she came away from those two years surprised by the emotional connection she felt for the country and its people. Especially, she missed the Japanese attention to the arts, in all areas of life.
“One thing is that, in Japan, everything is beautiful,” she said in a recent interview. “There’s always attention to aesthetics, even in the mundane. Even a lunchbox is beautiful.”

Beginning this week, villagers have a special opportunity to explore the culture and arts of Japan. During the second annual Ohayo Ohio, a series of programs and workshops will allow villagers to experience various aspects of Japanese society, including its music, storytelling, pottery, calligraphy and papermaking. The weeklong event is the first “mini-festival” of Japanese culture in Yellow Springs this year, according to organizer Meagher, who said a second series of events focused on Japanese performance will take place in the fall. The events are funded by the Japan Foundation and the Yellow Springs Community Foundation.

This week, the festival kicks off with a sake tasting and gallery opening of the exhibit “Japan: Through an Antiochian Lens,” a photography exhibit at the Emporium. The exhibit features the photos of three current and one former Antioch student who worked a co-op job in Japan, with sites ranging from a non-governmental peace agency in Nagasaki to social welfare organizations supporting the elderly to a tea farm in the countryside. The students are Meridian Howes, Michelle Fuji and Dale Kondracki, along with recent graduate Sylvia Newman.
The gallery opening takes place from 7:30 to 9 p.m. on Thursday, May 18.

The beauty of Japan was also the most compelling takeaway for Newman. Working on a tea farm in the rural mountainous countryside during her first visit to Japan, she didn’t expect the visual power of her environment.

“I was stunned at how beautiful it was,” she said in a recent interview.

Like Meagher, Newman was also intrigued by the complexity of a society that has both a deep respect for tradition and keen interest in change. At the tea farm, Newman appreciated the complex character of the farm manager, a dropout from the Japanese business world who left his corporate life behind to go into farming. At the farm, Newman, who studied Japanese at Antioch, witnessed the man and his colleagues engage in many intense critiques of Japanese society, with an especially sharp focus on the urban corporate culture.

“They were looking at their culture with a critical eye, which is just what we do at Antioch,” she said.

The festival continues on Friday, May 19, with a choral concert and panel discussion by the Harmony of Japan’s women’s chorus from the Dayton area. The free event takes place at the Herndon Gallery on the Antioch College campus.

On Saturday morning, May 20, villagers may take part in a shibori workshop led by Jackie Mulhall of Yellow Springs and Antioch College student Shannon Hart. The women will be teaching the shibori resist natural dyeing process on fabric, using the plant substance indigo.

Participants will be learning the ancient Japanese dyeing technique on a silk scarf and two cotton dinner napkins, according to Mulhall in an interview last week. While the event is free to Antioch College students (although a refundable deposit of $10 is required) non-students have a cost of $40, which includes all materials. The event takes place in room 107 of the Arts and Science Building on the Antioch Campus. To reserve a space, go online at brownpapertickets.com/event/2940804.

For Mulhall, who learned the natural dyeing technique at last year’s Ohayo Ohio from local fabric dyeing expert Karren Brito, the workshop is an opportunity to share with others her excitement at working with indigo, along with teaching traditional ways of folding the cloth to create specific effects. She especially enjoys the transformation of the fabric after it’s lifted out of the dyeing pot.

“What’s exciting about indigo is watching it change from green to blue. There’s no other dye that does this,” she said. “You never know what you’ll get, so it’s magical.”

And on Sunday, May 21, participants have a chance to make one of those beautiful lunchboxes. Villagers Kasuko and Lauren Heaton, second and third-generation Japanese Americans, will guide participants in making healthy, nutritious and pleasing Japanese lunch boxes. In an interview this week, Lauren Heaton said she has purchased bento boxes for the workshop, and she and her mother will instruct participants in making meat dumplings, rice balls and a Japanese omelet to fill the boxes up.

According to Heaton, she was inspired to make the lunchboxes by the memory of her grandmother, Yasuko Kakehashi, a longtime villager known for her cooking and sewing. Every Friday afternoon when her granddaughters were in high school, Yasuko would make them a bento box to take to school.

“It was the most exciting part of the week,” Heaton said. “The boxes are so damn cute.”

Participants will pay $25 for the workshop, which takes place from 11 a.m. to 1 p.m. at the North Hall kitchen on the Antioch College campus. To sign up, go online to brownpapertickets.com/event/2921422.

Another round of activities takes place later in the week, with a Washi papermaking workshop and lecture on Wednesday, May 24, from 8 a.m. to 3 p.m. Teaching the workshop will be Antioch alum and MacArthur Fellow Tim Barrett, who studied Japanese printmaking in Japan for two years under a Fulbright Fellowship and has since become a scholar of hand papermaking and director of the University of Iowa’s Center for the Book. The event takes place at the Arts and Science Building, room 107, and requires $60 for general admission, along with a $10 refundable deposit for Antioch students. Interested persons can register online at brownpapeertickets.com/event/2940902.

At 7 p.m. on Wednesday, May 24, photographer Everett Brown, who is being flown in from Japan for the event, will give a gallery talk on his photo exhibit in the Herndon Gallery. He has photographed the people of Soma, who have continued their samurai horseman heritage of more than 800 years.

Friday, May 26, 10 a.m. to 2 p.m.: Raku pottery workshop by long-time potter Todd Hickerson. The event costs $40 for non-students, and people may register online at brownpapertickets.com/event/2940904.

Friday, May 26, 7 p.m.: A free Koto performance at the Herndon Gallery by the Gai Koto Jim ensemble using the koto, the national instrument of Japan.

For more information, go to facebook.com/ohayoohio2017.