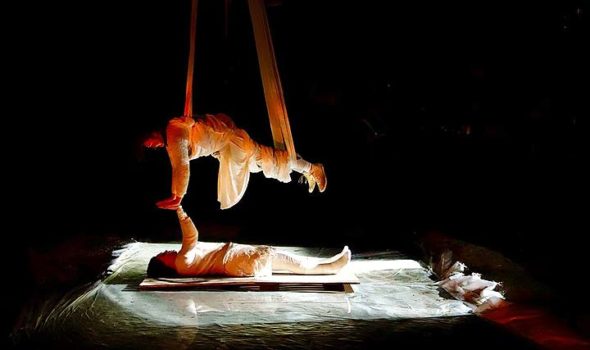 Antioch College—‘Colloquia’ invites in the community

Antioch College’s Herndon Gallery was busy on Monday. Sam Stewart was putting the final touches on his photo and video installation. Kathryn Iris Olson was reinstalling her piece, 1 in 5, that had just finished its run at the Yellow Springs Arts Council Gallery. The piece has a searing theme — her personal experience of rape and sexual assault — and taking it down and putting it up again is exhausting, she said. But Olson hopes the work speaks to survivors; she got “beautiful responses” from the YSAC show.

Both students are graduating seniors, and both are taking part in Colloquia 2017, a campus-wide “sharing out” of senior capstone projects, according to Herndon Gallery Creative Director Jennifer Wenker, who is coordinating the program. Colloquia 2017 opened on June 12 and runs through June 24, graduation day, with special events on June 15 and 22. All events are free and open to the public (see sidebar on page 5 for schedule).

More than 50 graduating seniors across all academic divisions are represented in this year’s colloquia, which the college plans to hold as an annual event, according to spokesperson Mark Reynolds.

“We’re proud of our students, and we want to share their work with the community,” he said.

The idea for a public sharing of work began within the arts division, but was expanded to include all four of the college’s academic divisions, according to Wenker. Students are presenting work in the manner that is typical within their discipline: science students are holding a poster session; humanities students, a salon and reception; social science students, research presentations; and arts students, exhibitions and performances. Beyond the work itself, there will be food and a festive atmosphere, Wenker said.

“This is educational, but also celebratory,” she said.

The colloquia catalog, designed by graduating senior Hannah Priscilla Craig, presents descriptions and images of student work. It demonstrates the extraordinary breadth, depth and interconnection of learning at Antioch, according to President Tom Manley in his introduction to the catalog.

“I am confident you will be as impressed as I am with the wide range of questions, problems, intersections, connections, subjects and approaches represented within. … [I]t almost seems impossible that a small college could be the site for such production,” he writes.

Graduating senior Kelsey “Teddy” Pierson’s project, a “friendly” field guide to Yellow Springs and environs, reflects one such intersection. A practicing photographer, Pierson entered Antioch four years ago intending to major in media arts, but became fascinated by the natural world, especially botany, while working in Glen Helen during her first co-op.

She designed her own interdisciplinary major, “Communicating the Natural World.” And the field guide she’s created does just that — in a highly personal, idiosyncratic way. It combines her own close-up “portraits” of plants with botanical information, plus personal reflections and meditations.

“I take time to sit with the plant that’s my subject, opening myself up to it and trying to relate as two beings,” Pierson explained.

Photographs from the guide are currently on display in the Herndon Gallery, as is a copy of the guide itself. And Pierson and other arts students will be on hand to discuss their work at an arts reception Thursday, June 22, from 7 to 10 p.m.

Graduating senior Rian Lawrence, an environmental science major, is exploring another kind of connection: between soil health and water quality. Her final co-op took her to the Ohio State University extension campus in Wooster, where she and other researchers designed a way to test whether soil pH had an impact on certain nutrients leaving the soil and entering bodies of water, causing harm to aquatic ecosystems.

The theory, she explained, is that decreasing levels of acid in rainfall — a good thing, the product of clean air measures enacted in 1990 — combined with heavy fertilization of farm fields, may cause more nutrients to leave the soil and pollute surface water.

Her research suggests that this might be the case with certain types of soils, at least in the microcosm that she and fellow researchers designed.

A research poster presenting her findings will be one of almost a dozen projects on display Thursday, June 15, from 12:30 to 2:30 p.m. during the sciences division poster session and networking reception at the Arts & Sciences building.

Lawrence said she’s excited to share her research with the community. “It’s good practice for students to communicate what they’re doing, why it’s important and why people should care,” she observed. And it builds “trust and understanding” between emerging scientists and the public, a critical issue in a culture where science is sometimes viewed with suspicion.

Graduating senior Hannah Priscilla Craig (the Colloquia 2017 catalog designer) is also excited to share her work. A performance major, she’s interested in creating “immersive” pieces that explore the body in space and invite audiences into the performance process in novel ways. She and fellow senior arts majors Sam Stewart and Hannah Linger already presented a performance last Friday that involved swings hung from trees, a bed made of pancakes (the audience ate some) and a window of simulated rain.

“We made something we would want to attend,” Craig said of the work, which explored the necessities of air, food and water.

And on June 22, she’ll be performing a short, spontaneous dance in front of a video montage of 20 such dances she’s performed in locations across the country and world.

Such work culminates four years of growth and change.

“I came to Antioch with a classical theater background, but I was introduced to performance and given a lot of space to experiment,” she said.

That space has resulted in new interests and directions, a common theme for graduating seniors who spoke with the News this week.

“Antioch really challenged me to be proactive in my internships and classes, to take the initiative of being curious and seeing where that led me,” Lawrence said.

That’s precisely what Colloquia 2017 is designed to showcase and stimulate, according to Wenker.

“Participants can follow their own curiosity, the same way students have,” she said.