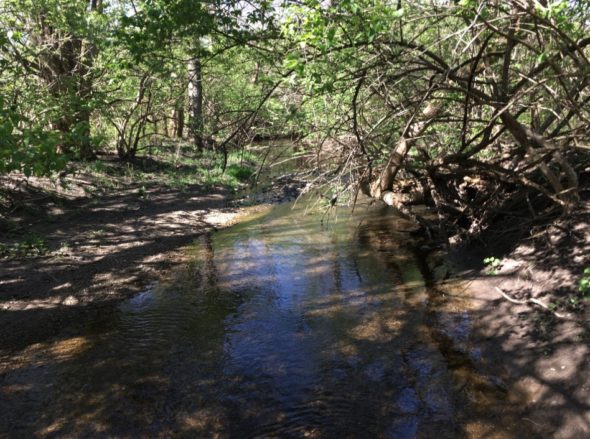 BLOG— One Earth, one home

Summers as a child I played in a stream. A creek, trickling through the edge of a park in my neighborhood, bearing all the marks of human disturbance: tin cans, bottles, paper trash, even for a time an overturned shopping cart. Also algae, stagnation, funky smells. It was the 70s, early 80s. There wasn’t so much plastic then. At the grocery store, the baggers packed our comestibles into brown paper bags.

A stream: polluted but still beautiful, still mesmerizing to a child.

I thought of my childhood stream/creek on Saturday, crossing and recrossing the Jacoby Creek on a portion of the former Arnovitz farm, now home to Community Solutions’ regenerative farming project and stream conservation effort. Tecumseh Land Trust’s annual meeting was held there Saturday afternoon, in a magnificent cathedral-barn, after which attendees split into two groups for a tour of the land. I tagged along with Devin Schenk from the Nature Conservancy, the organization partnering with Community Solutions and Tecumseh Land Trust to restore the stream and its riparian environment. About 80 acres of Community Solutions’ total 128-acre parcel may ultimately be put under conservation easement for this purpose. The proposed conservation area includes the creek, its immediate wooded banks and generous swaths of land where wetlands wait, just beneath the surface of farm fields, to return.

Village money is helping to purchase the easement, so all villagers have a stake in the beauty and future of this land.

I was amazed, but shouldn’t have been amazed, to learn that the creek’s smooth arc through the property was humanmade. A stream, like the best of thoughts and conversations, naturally meanders. And so one of the tasks of the Nature Conservancy wizards is to re-meander the stream. Re-meander! That was the actual term Devin used.

They’ll also be improving the creek’s shade, depth and flow — more magic. They’ll plant trees near the fords, the shallow areas where the stream is exposed to direct sun. All that sun exposure overheats the water, creating dead zones, breaking up the continuous ribbon of life that a river should be. They’ll create pools in some areas and riffles in others, distinct habitats where different creatures dwell. Riffles are those places where water runs fast and turbulent, adding oxygen to a stream. Plus personality, plus a silver voice.

Our final crossing brought us into the ooze, the best part, I thought. We were all pretty hot by then, and I won’t speak for the rest of the group, but I was prepared to lie down in the muck and let it and the long sloppy grass swallow me up.

Last week the U.S. pulled out of the Paris climate agreement, a pact with 194 signatory nations, and two, now three, dissenters. When I first heard the news, I found it hard not to smash something, to weep. The world’s industrial behemoth and number-two polluter: going its own way.

Does it have to be said? There is only one way. Only one Earth, only one home. A blue-green marble spinning in space. A reclaimed farm, a re-meandered stream. A deeply grooved old cottonwood growing up from the middle of a marsh. An Ohio field, expectant, on a June afternoon. A childhood summer. A childhood of summers, long past yet flowing on and on.

I came home Saturday dirty and a little tired. I wished I’d been able to join the second group as well, which walked the property talking about soils. Community Solutions has big plans for soil remediation. What I saw of the current fields, conventionally farmed for decades, was discouraging: the ground was dry, cracked, weed-ridden, with last year’s broken corn cobs and stalks crunching in a grisly rubble underfoot. But soon the fields will be planted with cover crops, a small step toward rebuilding soils, then farmed sustainably using different and ingenious methods to produce food and enrich, not deplete, the earth.

Such farming is an act of love, I think.

On Saturday I felt that love, which as much as the day’s heat made me to want to sink deep into the earth’s ooze. I didn’t, at least not literally. But my heart, clenched since last Thursday’s climate agreement news, became less stone, more bird. I watched the slow creek, the grass and trees, the faces of my fellow walkers and the daytime stars of cottonwood seeds, drifting over all of us.

Wherever we were going, we were already home.