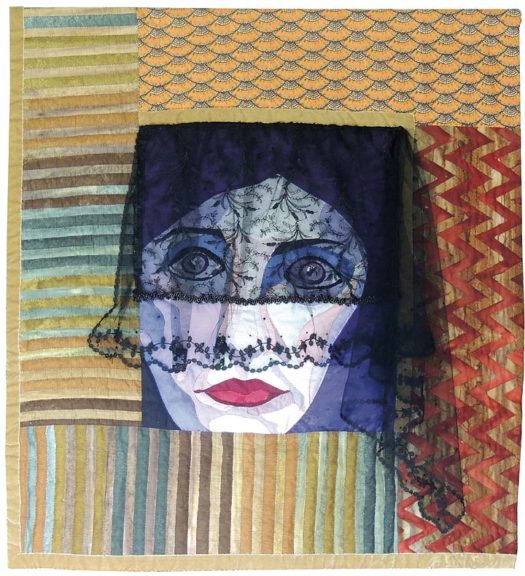 The multi-layered wall hanging Black Veil is one of about 50 works by the late fabric artist Marianne Britton on display in a new exhibition at Springfield Museum of Art. (Submitted photo)

In the last years of her life, Marianne Britton was known to have a fabric-art project always in hand. In the weeks after her death early this year, family and friends discovered that Britton apparently had multiple projects simultaneously in progress — in her home studio, they found drawings and designs for future projects as well as pieces at various stages of completion.

A memorial exhibition representing a wide selection of works by Britton, including quilts, wall hangings and fabric pictures, is currently on display through late September at the Springfield Museum of Art. And an opening reception will be held in conjunction with the museum’s annual juried members show on Sunday, June 25, 5–7 p.m.

“I’ve seen Marianne’s work piece by piece over the years, but seeing a collection of work all together, I am amazed by the incredible breadth and depth,” said villager Eve Fleck, who is the director of communication and membership at the museum. “The creativity and attention to detail is  extraordinary.”

A visit to the show reveals that Britton’s work defies classification, as every piece is different -— in style, material and mood. Certain themes reappear -— travel, people, nature, animals, the sea — but each composition earns a different treatment. Some are whimsical, some are thoughtful; some charm, while others evoke personal reflection. Some are based on observations from life, some are purely imaginary and some are thoroughly abstract.

All are created with fabric, needle and thread.

Some include beads and found objects such as stones, shells and feathers. But the foundation for all the work is fabric and thread. Her sewing techniques included quilting, applique, embroidery and needlepoint. Every inch of every work is transformed from its original state — even the borders. What at first appears to be part of a fabric’s print, on closer inspection is seen to have been created by Britton’s hand.

And everything is by hand.

While many contemporary quilters and even fabric artists opt to use machines that mechanically sew a design programmed into a computer, Britton never did, said former villager JoAnn deArmas Wallace. Married to Britton’s cousin, Edward Wallace, JoAnn was named in Britton’s will as the recipient of her quilts, which the estate lawyer interpreted as all the work and materials related to Britton’s fabric art.

That included the fabric, the sewing tools, the files of patterns and designs and the books on quilting and other handicrafts, said Wallace, who had the pleasure of working with Britton some years back to make a wall hanging for Wallace’s granddaughter.

“It was so much fun to work with her,” Wallace said recently by phone from her home in Pennsylvania. “I can do applique. I knit, crochet. I can sew. I do some drawing. I have that.” But she said Britton was on a different level. At one point she observed Britton using “a needle less than an inch long. The hole was so tiny. The thread had to be very, very fine.”

The wall hanging featured “animals shaped like letters of the alphabet,” Wallace said. “That was great. She was always finding something new and would be excited.”

Born July 26, 1941, in Fort Knox, Ky., Britton spent her youth as an “Army brat,” moving every couple of years, according to her obituary.

“She came to Yellow Springs because we were there, said Wallace, who oversaw Antioch’s travel abroad program in the 1990s.

“We found out (local sculptor) Jon Hudson was looking for someone to help with a big project.” Britton took the job, and “they became great buddies,” Wallace said.

Later, “We found out from a friend of ours who also worked at Antioch that the Morgan House was up for rent.” Britton was the well-known proprietor of the bed and breakfast for the next 20 years.

It was after she left the Morgan House that she began working on her fiber art more seriously, Wallace said.

The Wallaces left Yellow Springs in 1999, after JoAnn took a job at another college. While they came back often to visit, she said she wishes she could have spent more time with Britton and her work.

Most everything else is packed up in cardboard storage boxes stacked in villager Sharri Phillips’ fiber arts studio above the Little Art Theatre. Wallace said there are about 10–15 boxes filled with fabric. Then there are boxes of “patterns, ideas and pictures she had cut out” and boxes of tools — lots of scissors — and thread.

Wallace said she wanted the materials to stay in Yellow Springs. “If I brought it back here it would not be where she was.”

Wallace’s hope is to find a permanent home for the materials — “where they can be used.” Her vision is to see a nonprofit established that would focus on teaching and creating new works, with Britton’s materials and patterns as inspiration and guides.

Phillips, who knew neither Britton nor Wallace personally, said she is happy to offer a storage space while Wallace explores the nonprofit possibilities. As a fiber artist herself, she said she admires Britton’s work, and especially appreciates her level of detail and dedication to working by hand.

“Stories by Hand” is the title of the memorial exhibition in Springfield. Wallace is happy that more people will have the chance to see Britton’s work, and hopes the show will inspire movement toward the formation of a nonprofit.

The museum’s Fleck said she feels that “it is an honor” for the museum to host the show. “It’s just a gift,” she said.

The shared opening reception with the museum’s juried members’ show also offers an interesting connection in that the members’ show top prize winner is Jon Hudson, the artist for whom Britton came to Yellow Springs to work.

Fleck also notes that works by a number of Yellow Springs based artists are included in the show as well as in an exhibition already on display by the Western Ohio Watercolor Society. What’s more, villager Jennifer Rosengarten’s one-woman show, Gardens & Ponds, remains on view through next January.

Britton’s work is hung in the Beach Gallery. Upon entry, visitors will be greated by her first quilt, Butterfly Quilt, which Britton started at the age of 7 under the guidance of her grandmother, Mabel Tomlinson. They began the project in 1948, and she finished in 1971. A note by Britton, hung on the gallery wall next to the quit, points out that her sewing development can be observed as the quality of stitching improved over time.

Wallace said she was delighted by the note. “It was such a lovely thing to find.”