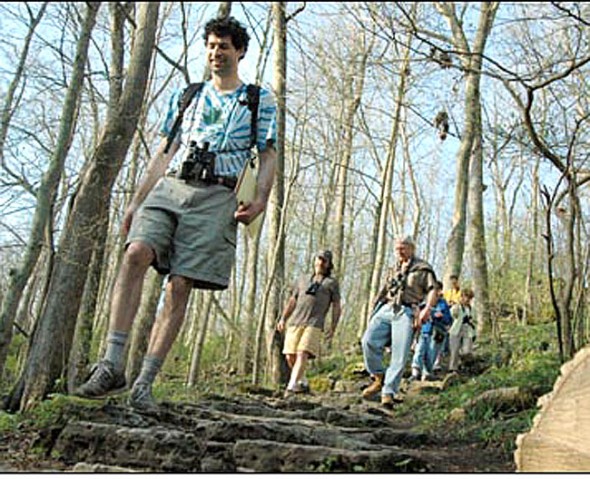 A special hike along the Inman Trail will follow a more than 50-year-old scripted guide written by former Glen Helen Director Ken Hunt on Saturday.

Glen Helen’s weekly schedule of events always includes a number of guided hikes along its trails. This weekend, however, hikers will also get the chance to travel through a part of the Glen’s history: on Saturday, July 1, Glen Helen Director Nick Boutis will lead a one-mile walk along the Inman Trail using a recently rediscovered scripted guide interpreting its history and ecology, which was written by former director Ken Hunt in the late 1950s.

Hunt was the first director of the Glen, coming to Yellow Springs in 1946 to teach biology at Antioch College and to head up the Glen. As both a conservationist and an educator, Hunt was passionate about “the educational potential of the land,” as he said in an interview with the Antiochian when he retired.

“[I]n many respects, he set the wheels in motions on programs [that] continue to this day,” said Boutis via email this week. “The trail system as we know it, Trailside Museum, the Outdoor Education Center, the Raptor Center, the South Glen Farm, the Riding Centre — these all got going under his watch.” He also established the School Forest, dedicating 100 acres of the Glen that YSHS students still farm to sell Christmas trees every year.

Hunt’s scripted guide to the Inman Trail was donated by longtime Glen volunteer and supporter Doris Clemens, who found it in her personal collection. The donated guide still bears a 15 cent price tag, which indicates that it may once have been sold in Trailside Museum.

“I had no idea it existed,” said Boutis. “I’m sure that folks with a longer view of history would have been aware of it, but considering that Ken retired about 45 years ago, this hasn’t seen the light of day in a while.”

Despite its age, Boutis said that the script still holds up in terms of its ecological understanding of the Glen. The only thing that’s aged is the Glen itself.

“The biggest change is that Glen Helen was a substantially younger forest when the guide was developed. … [L]ess than a third of Glen Helen was forested when it became a nature preserve in 1929. … Ken would have been viewing a forest where, in many areas, the oldest trees were only 30 or so years old. This translates into different habitat for other plants and animals.”

“[Hunt] describes research and land management activities undertaken in the 1940s and ‘50s, and enlivens these stories at a time when there are fewer living keepers of this history,” said Boutis. “Consider this sentence, mentioned when describing the burial mound near the Yellow Springs: ‘Local residents remember the Chautauqua tents that brought entertainment and lectures here during the World War I era.’”

As the Glen’s director, Hunt was also one of its biggest defenders: in 1958, he led a large opposition to a proposed re-routing of U.S. 68 that would have taken the highway straight through the Glen. He was later instrumental in stopping the installation of a sewer line and disposal plant in the Glen, which was proposed by the Village. Hunt was also a proponent of preserving open space in general, having aided in setting up conservation easements in the area.

According to Boutis, his efforts “were defining in the history of both the Glen and the Village.” Hunt retired from the Glen in 1971, and died in 1995, 20 years before the Glen became fully protected in perpetuity by a conservation easement.

The one-mile guided hike along Inman Trail will begin at 11 a.m. at Trailside Museum, and will last approximately two hours. Admission is $5; tickets are available online at the Glen’s Eventbrite page.