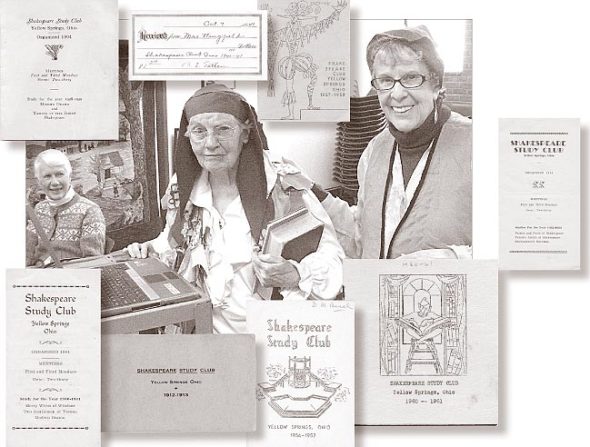 Longtime Shakespeare Study Club members Rae Dewey and Esther Rothman, both now deceased, presented a two-part program, “Fools in Shakespeare,” in 2009, with current member Donna Denman looking on. The group was formed as a women’s club in 1904, and has met continuously since then, still with an all-women membership. Copies of annual program booklets dating back to the club’s earliest years are held in the Antiochiana archives. (Submitted photo; scans courtesy of Antiochiana)

For 113 years, a members-only group of Yellow Springs women has been meeting to read and discuss the works of Shakespeare and other authors. The women call themselves the Shakespeare Study Club, and that middle word — study — signals the group’s seriousness.

“I wouldn’t say it’s a scholarly group, but it’s serious,” said Ruth Bent, a longtime member who stepped down from the club just a year ago due to failing eyesight.

The group meets twice a month from September through May — first and third Mondays, the same schedule the club has followed since the 1920s. One of its early rules was “no refreshments,” and it’s stuck to that, except during special meetings at Christmastime and end-of-the-season Guest Day. That rule is important, according to Bent.

“It said: we’re here to do something other than socialize and brag on our cooking to each other,” she said, with a chuckle.

In other words: this is no ordinary “woman’s club.”

In fact, it’s a club of some renown, with a reputation beyond Yellow Springs. Susanne Oldham, a current member, worked for 10 years at the Folger Shakespeare Library in Washington, D.C. Her boss knew about the club, and about one of its illustrious, longtime members, Jewel Graham, who died in 2015.

“The club is known in Shakespeare circles,” Oldham said.

Over the years, the club’s membership has included many Antioch College graduates, faculty and faculty wives. Membership was, and is, by invitation only, and members tend to stick around, exiting the club only through ill health or death. The club’s official history, written by member Elsie Owen Hevelin, notes that the club’s “first lady,” Edna Carr, was a member for 34 years. Nine days before her death, she asked who would be reading “The Tempest” at the next meeting, and said she would keep a copy by her bed to follow along.

Being a member is an honor and a commitment, according to Donna Denman, who’s been a devoted participant for almost 20 years. Her friend Esther Rothman, who passed away this spring, invited her into the club in 1998. Though she knew Rothman well, the invitation came by mail.

“Back then it was much more traditional. You received a letter and you responded by letter. If they voted you in, it was a big deal,” Denman said.

Flo Lorenz is a second-generation member, invited into the club after the death of her mother, Winifred Lorenz. “You have no idea how exclusive it was,” she said, eyes sparkling with mischief. But Lorenz also knew from her mother’s experience that membership was a duty as well as a pleasure.

Members are required to organize and present a program related to Shakespeare or another literary or cultural topic of their choosing. In the 1912–13 season, for example, programs included French Drama, Study of Bernard Shaw and Shakespeare of Japan. Over a hundred years later, the 2014–15 season featured a Poetry Jam and Soliloquies by Shakespeare’s Female Characters.

“I saw how hard my mother worked on her presentations — for months,” Lorenz said. She and other present-day members concurred that similar levels of effort go into today’s programs.

At the club’s annual Guest Day in May, an outside presenter comes in. This year’s Guest Day, for example, featured local actor and director John Fleming discussing how to act Shakespeare using nuances of voice and gesture.

Club membership was originally capped at 16, then lifted to 18 active members, where it remains. (There is no limit on associate members, who remain affiliated but without full membership duties.) The 18-member limit probably relates to “how many people would fit in your living room — or how many chairs you owned,” Bent explained.

The Shakespeare Study Club is Yellow Springs’ oldest continuously operating club, according to Antioch archivist Scott Sanders. When the group was formed in 1904, American women did not yet have the vote. The club has persisted through enfranchisement and a host of other revolutions in women’s lives and roles. It remains a gathering of women “serious about a cultured life,” according to member Becky Eschliman, a Shakespeare enthusiast and club member for 15 years.

The club has periodically considered opening its ranks to men, who are excluded by tradition rather than constitution. (And there is a constitution — it’s printed in full in the pages of early programs.) Barbara Brookshire, the club’s incoming president, favors such a move. “I’d like to see it be more inclusive,” she said. Outgoing club president Dinah Anderson said she has several male friends who would like to be part.

“But too bad,” Anderson laughed.

Eschliman said the club remains women-only as a way of honoring tradition and “knowing that women will have their voices guaranteed” as they come together in a group. So far, a majority of members has agreed with that thinking.

But the club is changing in other ways. It’s relaxed its previous formality; invitations to join no longer come by mail. And recent deaths of stalwarts — Graham, Rothman, Mary Agna — invited in a fresh wave of members, bringing new energy to the group. The club still tilts older, however; most members are retired, and many joined only after they retired. Women who are still working aren’t always free two Monday afternoons a month, members pointed out.

“The world has changed. Women have a range of opportunities to spread their wings,” said member Mary Frost-Pierson, a retired University of Dayton professor and former owner of a mystery and detective bookstore in Yellow Springs.

Every member interviewed for this story said it was the other members — the circle of bright and literary women — that drew them in, and kept them there.

“I was so impressed,” Frost-Pierson said of her early exposure to the group. “I was getting to meet some of the most interesting women in Yellow Springs.”

Anderson concurred. “Every meeting is ‘Old Home Week,’” she said. “The fellowshipping is just delightful. The women are there because they think this is fun!”

And then there’s the enduring draw of the Bard. The club has persisted because of the Shakespeare, Brookshire said. “He compels us to continue to read him.”

Asked to name favorite plays, most members had quick and decisive answers.

“The Tempest,” Denman replied, citing similar reasons. “It emphasizes forgiveness and reconciliation. … It’s one of Shakespeare’s last plays, and it says what he in the end had to say.”

Frost-Pierson offered her favorite characters: Beatrice and Benedick of “Much Ado About Nothing,” calling them “the two wittiest lovers in all of literature.”

Asked why the Shakespeare Study Club took root and still endures in Yellow Springs, Eschliman grew thoughtful. Shakespeare is something that “soaks into the ground here,” she said.

In the 1950s, the village was home to Shakespeare Under the Stars, the first Shakespeare festival in North America, produced by Antioch Area Theatre, a troupe of professional and amateur actors led by Antioch professors Arthur Lithgow and Meredith Dallas and actor Ellis Rabb. Several members of today’s Shakespeare Club have memories of those performances. Eschliman, who grew up in Yellow Springs, was too young to attend, but sensed through her parents’ excitement that something magical was afoot.

“I knew this was a special deal,” she said.

And Shakespeare remains a “special deal” in Yellow Springs. Walk through the empty amphitheater on Antioch’s campus and “you can almost hear the voices,” Eschliman said. “The Shakespeare Club is connected to all that,” she added.