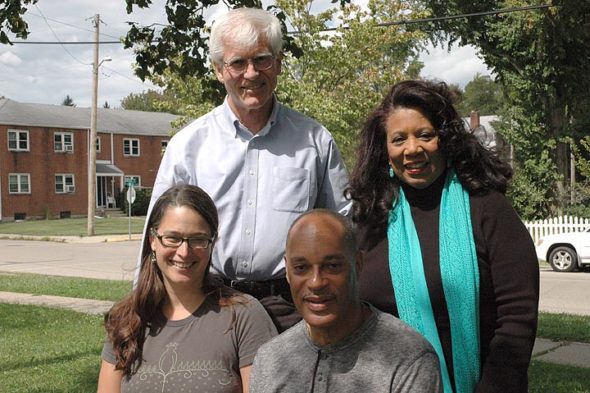 When your mission is to ameliorate disputes, it’s hard to quantify the scope of your effectiveness. How does one measure the absence of strife?

So there’s really no knowing the extent to which Yellow Springs might be different if not for the existence of the Village Mediation Program.

There are, however, some markers. And as the program celebrates its 30th anniversary year working to facilitate a more harmonious community, the Village is honoring that work. Village Council unanimously passed a resolution Tuesday, Sept. 5, recognizing VMP’s contributions. And a public celebration will be held Thursday, Sept. 14, 7 p.m., at Antioch University Midwest.

John Gudgel, the program’s part-time coordinator for the past six years, said the level of service fluctuates, with an average of four to five mediation referrals or requests each month. Actual mediations, however, number “two or three, or sometimes one. Sometimes we don’t have any,” he said.

Recent years, however, have seen “an uptick in community facilitations,” where Village mediators are called on to help with larger discussions about such hot-button topics as the controversial New Year’s Eve policing incident or proposed uses of the Village-owned property commonly known as the CBE, Gudgel said.

The service is invaluable, Village Manager Patti Bates wrote in an email earlier this week. “The Village Mediation Program is a wonderful asset to the Village,” she said.

Since its inception in 1987, inspired by a proposal by villager Bruce Heckman, the purpose of the VMP has stayed the same: “to help disputing parties reconcile differences through constructive dialogue leading to mutually acceptable solutions,” according to a description written by Heckman.

Retained under the auspices of the Village, with the coordinator reporting directly to the village manager, VPM nonetheless maintains a degree of autonomy within the Village government, serving more like a contract agency, Gudgel said.

Villagers either seek out mediation services on their own or they are referred by police, Mayor’s Court or other officials.

Heckman, who is one of five original mediators still active with the program, said that a certain amount of “conciliation” can happen over the phone when a potential client makes that initial phone call.

“Most people would rather eat live toads” than confront disagreements in a mediation setting, Heckman said. So they have an incentive to find workable solutions to their problems before taking that next step.

Not that the mediation process is necessarily unpleasant, Heckman said. In fact, the opportunity for each participating party to speak and be heard in a safe space can be  powerfully uplifting.

He recalled a neighbor dispute a number of years ago over security lights on  a house keeping the folks next door awake at night. The neighbors “ended up hugging,” he said.

Heckman, who is also a psychologist, cautioned, however, that mediation is not counseling or therapy.

“We keep it real simple.” The role of the mediator “is not to solve the problem [at hand], but to move the conversation in a constructive way.”

The result is “people realize they have options. There’s a third way here somewhere.”

The mediators, “who come from all walks of life,” according to Heckman, are trained for the work, but don’t have to have backgrounds in specific areas or fields. “They’re generally public-spirited,” he said. “You’ve got to listen really well, and check your biases at the door. And stay out of the way, just stay out of the way.”

“There have been some really incredibly gifted people who have been mediators,” Heckman said.

In addition to the good will VMP generates, Village Manager Bates said that the program is an effective way to “keep many issues out of the court system.”

Heckman agreed. “Litigation would be the last recourse,” he said. What’s more, VMP is free, and the courts “can get expensive in a hurry.”

After 30 years of the Village Mediation Program’s local existence, the basic concepts of mediation and conflict resolution are widely known. But that wasn’t the case in 1987, said Marianne MacQueen, an early facilitator who was the program coordinator from 1990 to 1996.

“When I first got involved in mediation in the late ‘80s, a lot of people mistook mediation and meditation. During the past three decades, I think the term ‘mediation’ has become much more commonplace,” she said in a recent phone interview.

She noted that the local mediation program began at the same time that conflict resolution was developing and growing as a professional field of study. “It was a very exciting time,” she said.

The basic concepts, she said, go back to “tribal societies, where they recognized that people were better off if they got along.”

The methods are much preferable “to our so-called justice system, which creates a winner and a loser, and a right and a wrong,” MacQueen said.

“The [mediation] idea is to heal the community. … I think that’s really cool that it has these very ancient roots that are much different from our legalistic system.”

Another former coordinator, Lisa Kreeger, affirmed the value of the program in the village’s life. “The Village Mediation Program provides a deeply important service to the people of Yellow Springs,” she wrote in an email. “The process is an ideal example of how community members can work together to resolve difficult situations.”

While the concept of mediation is more widely known today than in 1987, similar programs in villages the size of Yellow Springs are still rare, current coordinator Gudgel said.

Nearby “Dayton and Springfield have well-established programs, but I have not come across a town our size with village mediation,” he said.

While noting that the program’s full effects can never be measured, Heckman said that the benefits are surely many. Relationships have been strengthened, and larger local issues have been addressed in constructive forums. What’s more, the ideas, thoughts and feelings expressed in broader facilitated discussions “help policy-makers discern what they have to do next,” Heckman said.

Through VMP’s 30-year presence and service, “I’d like to think our community is stronger,” he said.

One Response to “Celebrating 30 years of community mediation”