For the next several weeks, the News will run profiles of candidates for Village Council, school board, Yellow Springs mayor and Township Trustees. The series begins with the race for Village Council, where one incumbent and five challengers are seeking the three open seats currently held by Brian Housh, Karen Wintrow and Gerry Simms. Only Housh is seeking re-election, as Wintrow is retiring from Council and Simms is running for mayor.

This week’s story will focus on Housh, Taki Manolakos and Chrissy Cruz, while next week the News will highlight Kevin Stokes, Dave Turner and Lisa Kreeger. 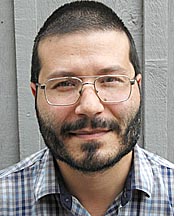 As the only self-described Socialist running for a Council seat, Taki Manolakos believes he would bring to the job a unique perspective.

Manolakos is especially concerned about making Yellow Springs more affordable, and wants to see Council adopt a living wage ordinance. Such an ordinance would require that all Village employees, along with employees of all businesses that accept economic development support from the Village, be paid a living wage.

“This would be wonderful for the village as a progressive town,” Manolakos said, stating he believes such a move would boost the local economy.

While some municipalities, such as Seattle, have passed a law requiring a $15-an-hour minimum wage, determining the amount of the living wage itself requires study, as a living wage varies from town to town, determined by such factors as housing and transportation costs, he said. To determine a local living wage, the Village would commission a study, although Manolakos said several of his economist friends have volunteered to conduct such a study.

An adjunct instructor at Wright State University, Manolakos is an economist himself. He holds master’s degrees in econometrics and the economies of developing countries. Economists view the world in a unique way, he believes, with an emphasis on incentives, costs and benefits.

“I would bring a different angle of thinking to Council,” he said.

Along with establishing a living wage, Manolakos wants to see Council address local affordability in other ways as well. He supports the work of Home, Inc. in constructing low-cost homes, but would like to see more focus on affordable rentals.

“I think Council could do more,” he said.

Manolakos would also like Council to encourage or develop businesses that reflect village values. In the now Village-owned CBE land on the western edge of town, he believes businesses built on a co-operative model would be a good fit. The Village could encourage such businesss by funding them through the Economic Development Revolving Loan Fund, he said, and Council could also highlight the issue through its discussions.

“Let’s talk about co-operative businesses and how they could help the village,” he said.

Council could also take a more proactive role in addressing the local decline in  racial diversity, Manolakos believes. While the solutions, aside from more focus on affordable housing, aren’t clear-cut, he would like Council to bring attention to the issue.

An appreciation for racial and ethnic diversity comes naturally to Manolakos, who is the child of immigrants. His parents came to this country from Greece, settling first in Texas, then Massachusetts, where he grew up. He and his partner, Sirisha Naidu, came to the village 10 years ago from Washington, D.C., where he attended graduate school at American University. Naidu is an associate professor of economics at Wright State University.

“I would be good at making Yellow Springs a natural leader in different areas,” he said. 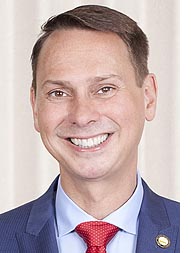 Having served on Council for one four-year term, Brian Housh is most proud of  what he perceives as his role in helping Council become a more effective governing body.

“I think we have a functional Council,” he said in a recent interview. “We’re civil and listen to each other, and we all respect each other. We’ve tackled some difficult issues. I’m proud of the work that we’ve done.”

Housh believes he has contributed to that functionality with his emphasis on listening to others, his comfort with hearing others challenge his thinking, and his interest in forging solutions out of differing points of view.

A five-year resident of Yellow Springs, Housh initially ran for Council thinking one term would be enough. But now he believes it’s valuable to see current projects through to the end.

“There’s an advantage to continuity as well as fresh blood,” he said. “It’s important at this critical time to get the right balance on that.”

Issues that Housh wants to see through include local policing. Villagers’ concerns with a policing style that some saw as too harsh grabbed Council’s attention early in Housh’s tenure, during the leadership of then-police chief Anthony Pettiford, who was followed by Dave Hale. Since Brian Carlson took on the chief job last spring, Housh feels good about departmental changes, especially regarding increased engagement with the community. Yet there’s still work to do.

“It’s important work, and I’m proud of the changes,” he said.

Making Yellow Springs more affordable is also high on Housh’s list of Village priorities. An upcoming Council-sponsored housing needs assessment will be “huge,” according to Housh, who also perceives that economic sustainability and community development contribute to local affordability.

“I think Judith articulated it well,” he said, referring to his fellow Council member Judith Hempfling. “This has to be at the forefront of everything we do.”

Continuity will also be valuable in the upcoming Village leadership transition, as Village Manager Patti Bates has announced her plans to retire in two years.

Other priorities for Housh are local arts and transportation, which he believes contribute to the quality of life in the village. As such, he is Council liaison for the Village Arts and Culture Commission.

Ending up in a small Ohio town wasn’t what Housh expected, after growing up in West Carrollton. He left that city after high school with the intention of not going back, disappointed by its lack of diversity. Following college at Cornell, he received a law degree at Tulane University in New Orleans. He practiced environmental law for several years but left that field, discouraged by how “the corporate side always won.” So he went back to Tulane to get an MBA, with a focus on social entrepreneurship.

Housh next moved to Thailand, where for 10 years he ran his own company, English Solutions. But illness and the lure of family and friends brought him back to the states and to Yellow Springs, where his younger brother, Matt Housh, is principal of Mills Lawn School. He has worked for the Yellow Springs Arts Council and the Little Art Theatre, and is currently Midwest policy director for Rails to Trails.

Housh’s busy schedule got busier last fall when he ran on the Democratic ticket for state representative. While he lost the race in this overwhelmingly Republican district, Housh learned a lot during the experience, he said. And one thing he learned is that he prefers local to state politics. 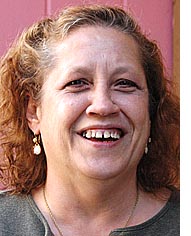 For several years, Chrissy Cruz has been suggesting to others that a good fit for the CBE  land would be a medical marijuana company. When Cresco Labs approached the Village about locating a marijuana processing and cultivation facility in Yellow Springs, she was pleased by what she saw as a promising economic development. Cresco Labs is currently waiting for state approval, after which it plans to build a medical marijuana operation on a portion of the CBE land. Cruz believes the Village should pursue similar opportunities.

“That dream has been fulfilled. Why not keep dreaming big?” she said in a recent interview.

Cruz has more ideas for the CBE land. She’d like to see more agriculture-based businesses on the property, including small farmers growing crops, a food processing company and a year-round farmers market on the land.

“It would keep the land in agriculture but also generate jobs,” she said.

Cruz thinks a lot about what’s good for Yellow Springs. Her creative thinking makes her a strong candidate for Village Council, she believes.

“I think I have some innovative ideas, and it’s good to have on Council someone who’s thinking outside the box,” she said.

Making her third run for Council, Cruz is also in the race due to her concern for lower-income villagers, whose needs she believes are often overlooked. As the owner of an independent baking business and single woman raising her grandson, Cruz knows what it’s like to sometimes struggle financially in Yellow Springs.

“I connect to the low-income people in town,” she said. “I’m walking in their shoes.”

That concern for lower-income people has led to two efforts that have engaged Cruz in recent years. Two years ago she created the $10 Club, an informal project that lends a helping hand to villagers facing one-time financial needs. Last year the organization helped 27 families who needed short-term help to address such financial emergencies as a utility cut-off.

Cruz launched the effort when a friend faced losing her home due to a utility cut-off. The friend needed several hundred dollars, which Cruz didn’t have, but she did have $10 to spare, and she figured others might have $10 as well. So Cruz put out the call on Facebook, and within hours raised the money from many small contributions.

“It’s a way for people who don’t have much to contribute,” she said.

She now relies on an advisory board — Jane Nipper, Kate Anderson, Wendy Ricks and Lindsay Burke — to advise her on funding requests.

Cruz is also a member of the Village Human Relations Commission, or HRC, which she sees as the “people’s council” of the village addressing human issues, while Village Council more often focuses on infrastructure. The HRC sponsors block parties and myriad other efforts that aim to enhance community in local life.

“I have seen so much good from the HRC,” she said.

Due to her own experience and that of others she knows, Cruz wants to see Village Council  take a more proactive role in addressing affordability. While she appreciates Council’s past collaborative projects with Home, Inc., that nonprofit’s homes can also be too expensive for those stretching their dollars, Cruz said. She would like Council to offer homes that are even more affordable, and sees the Village-owned Glass Farm as a potential site for new mixed housing units.

In some ways, things have changed considerably since Cruz first came to town as a 13-year-old, about 40 years ago.

“People who worked here back then could also afford to live here,” she said.

While over the years Cruz has sometimes moved away, she has always returned to the village, and she has been here most of four decades. It was a great place to raise her two daughters and one son, and now her grandson.

“It feels like home,” she said. “I feel such a strong connection.”