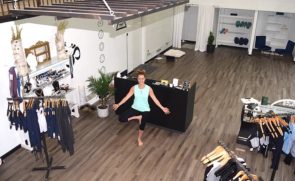 House of AUM, the Kings Yard yoga shop, expanded to the former home of Rita Caz in June. Pictured here in the renovated space is owner Melissa Herzog. The business recently received a Village Inspiration and Design Award, or VIDA, for its new look. (Photo by Jessica Sees)

After three weeks of renovations including new floors, crisp white paint and re-stained woodwork, the new sun-filled addition to House of AUM opened its doors on June 24 with the goal of expansion achieved.

Absorbing a building connected to the original House of AUM was a long-standing plan for Melissa Herzog, who opened the yoga studio nestled in the rear of Kings Yard with Stephanie Gooch just over two years ago. Herzog is currently the sole owner of House of AUM, as Gooch left to pursue other career endeavors, according to Herzog. When the neighboring building that once housed Rita Caz, a local jewelry store, became available, Herzog saw it as an opportunity for her to realize House of AUM’s vision of growth and visibility.

“We were very challenged with visibility on the back side of the building,” said Herzog. “So, when the opportunity to expand arose with [the owners of] Rita Caz retiring, we knew it would give us visibility in Kings Yard.”

House of AUM’s new space was recently awarded the Village Inspiration and Design Award, or VIDA, by the local Arts and Culture Commission. The recognition honors beautiful and innovative design, which in the case of House of AUM includes building an outdoor practice space; working with The Mural Machine, a local arts partnership, to create a mural on the side of the building; renovating the new space; and doubling the size of the operation.

“I think with this new visibility we can continue to grow our community and become a focal point of Kings Yard,” said Herzog. “We definitely have built a micro-community within the village that is always looking to add people to our AUM community.”

With the new airy space expanding from their original studio, House of AUM seeks to be an all-encompassing center for spiritual healing and maintenance, she said. Beyond their core operation as a yoga studio, House of AUM also provides weekend retreats, after-yoga meditation hikes, guided meditations, retail, astrology, tarot reading sessions and teacher training programs.

Herzog, who has always had an interest in tarot readings and spiritual guidance, met Hayward, who has given astrological and tarot readings for over 32 years, when she was painting her original space for House of AUM.

Hayward walked in, introduced himself to Herzog, and she invited him back to give her a reading. She was so impressed with his readings that she believed he would be a valuable addition to House of AUM.

The old space is still being used even though the face of House of AUM has moved. The original retail room is becoming a small group meditation space while the first yoga studio is still used for that purpose.

Herzog started her yoga journey in 2009 by taking yoga a few times a week, which transformed into leading weekend retreats in Yellow Springs at another studio. At that point, she was still living in Columbus. By chance, the original space for House of AUM became available and Herzog seized the opportunity to have a studio of her own.

“I wanted to be able to serve people in the way of guiding them in a yoga practice. So in stillness, into finding their calm, their center, what makes them feel good and helping them notice what they hold on to or what they need to release,” said Herzog.

The types of yoga classes offered by Herzog and her instructors include: vinyasa, heated, deep stretch, hatha, outdoor and beginner series.

The beginner series, offered during four consecutive Tuesdays, is another tool Herzog uses to introduce yoga to Yellow Springs community members. The hour-and-a-half time block, where the fundamentals of yoga are broken down, is taught in a way that makes the instructor accessible, Herzog believes.

“Everybody feels like they have the opportunity to engage with the teacher,” she said. “Often times, when you take a class, there is not a dialogue between the guide and the students during the class.”

Also during this series, beginners also learn how to modify postures to their own needs. According to Herzog, a lot of people are coming in with different injuries or at different fitness levels.

Over the last few years, even with the limited visibility in their original space, House of AUM has developed a spiritual community within Yellow Springs, said Herzog. The sense of community is something House of AUM has been developing from the beginning, according to Herzog. She draws similarities between the services offered and the word “aum” itself. According to yogitimes.com, “aum” is an all-encompassing mantra commonly used in yoga practices and is said to be the seed of all creation. It represents all states of consciousness.

“We want to be here as a support system for people who want to advance their own spiritual journey,” said Hayward in reference to House of AUM’s goals. “We want to be a hub where people go to continue on their spiritual path.”

This spiritually centered House of AUM community, which Hayward and his since-passed partner, Esther Lail, predicted for Yellow Springs when they first arrived in town around six years ago, is a place for those who feel lost, he said.

This sense of community is maintained with frequent gatherings hosted by House of AUM, said Herzog, including regular Goddess Rising dinners, where AUM community members gather for an evening of food and celebration of the rising goddess. The next Goddess Rising dinner series, which will honor the Goddess Lakshmi — Hindu goddess of wealth, fortune and prosperity — will be co-hosted by Lynda Terry and Herzog on Sept. 8.

Aside from the social events, Hayward credits good vibes for bringing in more people to House of AUM.

“The biggest thing is that we generate love and acceptance, so that brings people in,” said Hayward. “They walk in and tell us it feels good; we hear it all the time. We’re putting out this loving vibe and while people are finding themselves, they find each other here.”

Jessica Sees is an Ohio University student intern at the News.