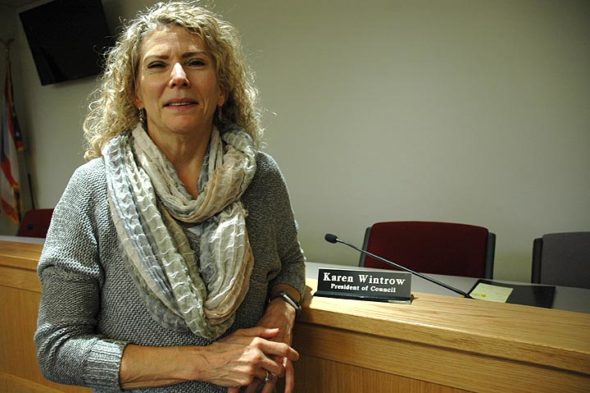 Village Council President Karen Wintrow will step down at the end of December. She’s served on Council three four-year terms, or 12 years. (Photo by Diane Chiddister)

A bittersweet departure from Council

It feels bittersweet to Council President Karen Wintrow to step down after 12 years on Council. Especially, she’ll miss the relationships with Village staff and her colleagues on Council.

“I’ll miss the congeniality,” she said in an interview last week.

But it’s time to step down, Wintrow believes. New people with fresh energy are interested in taking part in local government. And perhaps most important, Wintrow believes the Village is in a good place, and some of her most significant goals for the village are being realized. Having run for Council on a platform of boosting economic development, she’s excited that Cresco Labs will soon construct a facility for the cultivation of medical marijuana in the Center for Business and Education land, or CBE. The business, which also hopes to expand into processing medical marijuana products, plans to initially hire 35 workers, then increase to about 75.

Recently licensed for large-scale cultivation by the state, Cresco is the first business to be located in the long-awaited CBE. And as well as bringing new jobs to town, Wintrow believes the business could attract other companies with similar progressive values.

“Cresco will open the door to some new and different industry in Yellow Springs,” she said. “I believe it will attract businesses that are more open-minded and creative.”

Council’s recent partnership with Cresco also reflects a welcoming attitude toward business that Wintrow, the executive director of the Chamber of Commerce, helped promote. When she joined Council, the village had the reputation for being anti-business, and while she isn’t sure it actually was so, local leaders weren’t focused on economic development.

“We were able to create a business-friendly environment,” she said.

To Council Vice-President Brian Housh, Wintrow has played a significant role in the Village’s success, in a range of areas.

“Her leadership is why the Village is able to do so much,” he said this week.

Especially, he’s impressed with Wintrow’s efforts to make connections with other regional leaders, and to alert them to the strengths of Yellow Springs.

“When I go to networking events, everybody knows Karen,” he said.

Those personal connections have paid off for the Village, he believes. For instance, Cresco Labs was alerted to Yellow Springs as a possible facility site by State Rep. Rick Perales, who had worked with Wintrow in a variety of venues.

“She’s built a lot of opportunities for us,” Housh said.

Lots to be proud of

Along with the recent Cresco partnership, Wintrow points to other Council actions that she feels good about.

“I’m very pleased with where the village stands now,” she said. “It’s recognized as a special place and has respect in the region.”

For instance, Council has overseen substantial changes in the police department since the 2017 New Year’s Eve ball drop, when police responded to citizens in a way many found overly aggressive. Those changes include the hiring of a new chief, Brian Carlson, who has led the department in a significant shift toward more progressive and community-minded policies.

“I’m incredibly proud” of the changes in local policing, she said. “I do feel that’s an incredible accomplishment.”

Wintrow is forthright in stating that she was initially reluctant to impose Council’s directives on police when discomfort with the local department began surfacing several years ago. At the time, she said, she saw police as professionals who were capable of running their own department. But when the disconnect between police and the community became clear at the New Year’s Eve event, she understood that the local department required more direction from Council.

“I’ve come to respect and understand the perspective of Judith and others, and believe that Council should influence police policy,” Wintrow said, referring to her colleague on Council, Judith Hempfling, who had urged Council to take on police reform.

Wintrow also points to the 2013 zoning code update, overseen by Council, as another step forward for Yellow Springs. The update was an attempt to increase density in the village, and applications for new construction indicate that villagers are making use of the code in the way Council intended.

“The zoning code update was a huge thing we did that allows more and varied housing options,” she said. “It will dramatically change the face of Yellow Springs.”

Wintrow is also proud of the Yellow Springs energy portfolio. Village electric is more than 90 percent renewables, including hydro and  the recently completed local solar array. Ten years ago Council took a stand against signing on to a coal plant, an issue that, while currently mainstream, was controversial both locally and nationally when Council took the position. While Wintrow initially voted for signing on to the coal plant, she said she did so because she knew the majority would be voting against, and she wanted to represent the segment of villagers who supported coal.

The Village’s pivot toward renewables turned out to be not only environmentally prescient, but economically prudent, as the coal plant in question later suffered cost overruns, for which the Village would have been partially responsible.

“I’m proud that we took a strong role in rejecting that, and brought on hydro and solar,” she said.

Wintrow is also clear that challenges remain for Yellow Springs. First and foremost is finding ways to raise enough revenue to provide the services that residents want, and to do so without taxing people out of the village, because affordability is a growing concern as well.

“The question is, how does a village of 3,800 support all these services?” she said.

Wintrow advises new Council members to “listen, don’t come with preconceived ideas. Be willing to listen to different views. Be open to expanding your thinking.”

Wintrow came to leadership late, she said. She and her husband, Ted Donnell, moved from Dayton to the village in 1995 with their 3-year-old son, Lucas. Having both grown up in small, safe environments, they wanted the same environment for their son.

Soon after arriving in town, Wintrow was asked to join the board of the Children’s Center, and later, the Antioch School.

“I’d never even been on a board before,” she said.

Board involvement, along with her job at the Chamber, led to participation in the Community Information Project, or CIP, a Village/Chamber branding effort. Wintrow became  interested in how the village was governed, and after former President Tony Arnett left Council, there seemed a lack of Council members focused on economic development.

So Wintrow jumped in. Roundly applauded for her hard work, she estimates that during the years that she’s been Council president — her second year on the job, and the past four years — she’s spent about 20 hours a week doing Council business, and about 10 hours weekly when she hasn’t been president.

Asked what’s been most surprising about her 12 years as a Village leader, Wintrow answered, “That I could do it. It has been tough. There have been contentious issues and hard decisions.”

Most uncomfortable for Wintrow were decisions Council made last year to raise utility rates. Previous Councils had not raised rates for many years, leading the most recent Council to make several substantial rate hikes that, while necessary for Village revenues, have challenged some residents financially.

And most difficult has been the revolving door of Village managers — all in all, there have been seven managers, both interim and permanent, during Wintrow’s tenure.  Each change has brought instability, and a period of transition.

“As a whole, that was the most stressful,” she said.

But there have been many pleasures as well. Most of all, Wintrow is proud that Council has done its job in a civil and respectful way.

“There were few contentious periods when we were battling each other,” she said. “Most always we managed to agree.”

Some of the most significant issues before Council during Wintrow’s tenure, especially during the early years, pitted her against the more liberal Hempfling. Initially, the two sometimes clashed. According to Wintrow, she reached out to Hempfling to forge a better working relationship, and since then the two have most often interacted in a cordial and respectful way. Several times during this interview, Wintrow referenced Hempfling as someone who influenced her thinking.

This week Hempfling said she has considerable respect for Wintrow’s impact.

“She’s such a hard worker, and she cares deeply about the village,” Hempfling said. “We’ve had our differences but I appreciate that she’s always able to move on after them. She’s made space for views that she didn’t necessarily share.”

Wintrow is also proud of the robust nature of Village Council’s interactions with the public. Council, under first Hempfling’s, and now Wintrow’s leadership, makes space for public comment after most agenda items, and the public often responds. It’s unusual, according to Wintrow, for a municipal governing body to have such a high level of public engagement, and it’s largely due to the nature of Yellow Springs.

In many communities, people become engaged in local issues only when they are personally affected. But in the village, people get involved  for different reasons.

“People in Yellow Springs are more connected to their values and philosophy,” she said. “They bring to their concerns their intellect and passions.”

And while managing the length of Council meetings is always a challenge, Wintrow doesn’t regret providing the time for public comment.

“At the end of the day, our engagement is a positive thing,” she said.

While Wintrow’s time on Council has impacted the Village, it has also impacted her. Being a leader has helped her grow, Wintrow said, and she’s learned patience, focus and “seeing difficult things through to the end.”

“That’s been the surprise,” she said. “My personal growth.”

When January rolls around and Wintrow no longer needs to spend 20 hours a week on Council duties, she plans to focus on family and her job with the Chamber. At her Chamber job, she said, she’ll continue to fight for a robust business landscape in Yellow Springs.

Some have suggested that she might run for office again, especially for Greene County Commissioner. But Wintrow said she doesn’t plan to do so anytime soon.  She’s still amazed by having spent the past 12 years as a leader of Yellow Springs.

“Running for public office, that’s something I never imagined,” she said.